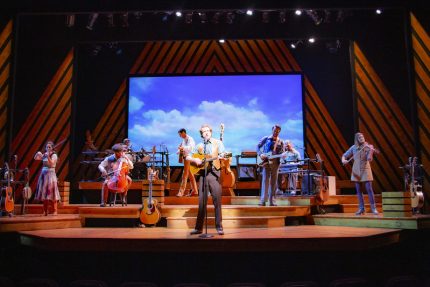 After its January re-opening production of Carousel was cut short by Covid, the Riverside Theatre in Vero Beach re-re-opened its season on May 10 with a splendid production of Almost Heaven: John Denver’s America. This show’s Opening Night audience was clearly stoked to be back in the theatre after so long and embraced the performance with heartfelt affection.

As conceived by Harold Thau, Almost Heaven is not a conventional narrative musical in the Rodgers and Hammerstein mold, nor is it a jukebox musical or a revue.

Drawing on John Denver’s catalogue of greatest hits from his twelve gold and four platinum albums, the show folds in a measure of biography for an enjoyable and moving musical collage of these songs and the times that fostered them. “Rocky Mountain High,” “Sunshine on My Shoulders,” “Take Me Home, Country Road” — all the best-loved radio hits are here, often given new and surprising arrangements.

Sam Sherwood is our surrogate John Denver, although he wisely suggests the performer without attempting an outright impersonation. Their physical resemblance is minimal, and the only real feature denoting any likeness is a progression of eyeglasses – from nerdy black frames to signature wire rims, to eventually none. Sherwood is tall and affable, and easily charms with a laid-back, country boy vibe mirroring that of Denver.

And while he is in effect the title character, and receives the lion’s share of the show’s focus, Sherwood is surrounded by eight other astoundingly versatile musician-performers. Allen Cornell, Riverside’s artistic director, noted in his pre-show remarks that most productions of Almost Heaven feature a band of five musicians and a cast of four singer-actors, but that this production instead opted for a cast of nine actor-musicians. Each of these gifted artists offers ample evidence of the broad range of their talents, from vocal prowess to virtuosic playing of multiple instruments.

Accordingly, concert-like aspects of the show take center stage. Seamless direction and musical direction by Sherry and David M. Lutken, respectively, showcase the many talents of their cast. In doling out the parts and deciding who will sing what song or play which instrument, their results are remarkable.

Margaret Dudasik is just one example: here she is, part of a trio singing a lovely rendition of “Leaving on a Jet Plane;” then, she’s playing flute; next, the piccolo; wait—that’s her again, one of the four (four!) violinists slaying “Thank God I’m a Country Boy.” And she’s step-dancing, to boot!

Suffice it to say each of the nine performers is given plenty of moments to shine, individually and collectively. If Denver’s work was ever deemed “uncool” during some people’s high school years, it has mellowed over time into fond, familiar melodies, highlighted by innovative interpretations. “Calypso,” for instance, Denver’s paean to the work of Jacques Cousteau, drives rhythmically to become the Act One finale, a rhapsody of percussion-only accompaniment.

The book, or storyline, such as it is, moves us breezily through the highlights of Denver’s early career and the cultural shifts in which he rose to fame, with just enough connective tissue to get from one song to the next.

In the second act, it bogs down in detail about the failed marriage to his wife Annie, about whom we’ve been told little and so don’t much care, but this is because so much of his songwriting dealt with that event. Occasionally, a performer will assume the character of an admirer or critic, stepping downstage to reflect on the proceedings by quoting from actual fan letters. (Allison Ann Kelly’s starstruck fan girl gushes amusingly early in Denver’s ascent.) It’s an effective technique that could be used more in the overall structure of the piece to help tell the story, in place of some of the “… and then this happened” narration.

As is the usual case at Riverside, the show is given an exemplary physical production. Allen Cornell’s scenic design nicely showcases the performers and their multitude of instruments. Warm, geometrically arranged planks of wood on either side of the action intersect upstage, their brown and tans matching the colors of the various guitars, cellos, and myriad other instruments arranged across platforms of staggered height. Kenyon Yeager’s lighting palette contributes to this overall look, with an amber glow of sunset, complemented by pools of blue about the stage. Subtle shifts in this lighting gently direct us to performers harmonizing or featured in instrumental solos. The effect is rustic and woodsy; we might well be in a mountain lodge in, you guessed it, Colorado.

This color scheme carries over into the costumes, which also blend the browns and tans of leather with blues of denim and touches of maroon. These costumes, designed by Kurt Alger, evocatively recall the 1960s and 70s without ever veering into parody. A furry vest here, a peasant blouse there, root us in the times without sledgehammering us for the effect. Even Ms. Kelly’s early-60s hair flip unobtrusively places us in Patty Duke-era America.

On a large video screen upstage of the action, projections designed by Joe Payne illustrate the lyrics of the song being sung or use stock photos to evoke the times and cultural bearings of the year in which Denver wrote a given song. Denver himself appears briefly on screen near the end, a poignant reminder of the man and his talent, taken too soon.

In his curtain speech, Cornell referred to Denver as “the Jimmy Stewart of folk music,” and it’s easy to see how Denver’s amiable persona attracted Hollywood to cast him as the Everyman to whom George Burns as the Almighty appears in the first Oh, God! movie. That likeability comes across in Denver’s songs, in Sam Sherwood’s channeling of the songwriter, and in every aspect of this production. If the title Almost Heaven may overstate the show’s case just a smidge, it is a very entertaining evening.