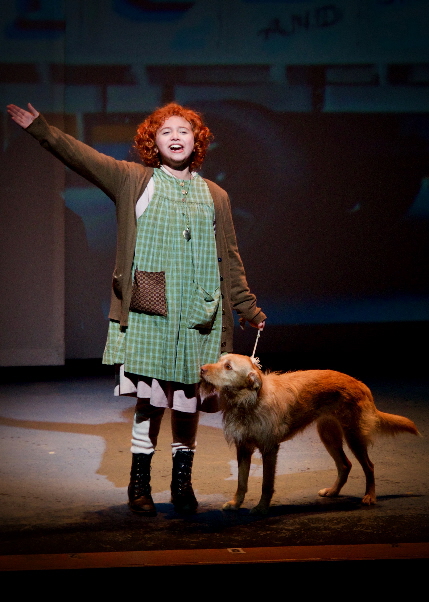 It’s not that it’s impossible to mess up the musical Annie, but when you have a reliable troupe of talented hands like those connected to the current Wick Theatre production, you are guaranteed an entertaining evening.

So long as you have clarion voices like Peyton Ella as the title moppet, George Dvorsky as the richest man in the world who is not President, the experienced director Norb Joerder and musical director Eric Alsford, plus Sally Struthers as Miss Hannigan, you can rest assured that the Wick’s edition of this 41-year-old will be a pleasant holiday diversion.

That said, Annie has a potential to be a touching paean to hope and very few productions manage to reach that level. This one is a professional well-executed effort, but it, too, doesn’t reach the heartstrings.

On the positive side, it doesn’t hurt that several cast members have previous runs with the work: this is Ella’s fourth turn in the curly red wig; Dvorsky, at least his second time being bald, and Joerber, at least his third turn at the helm. Struthers has played the role often enough that she travels with her own costumes. Really. 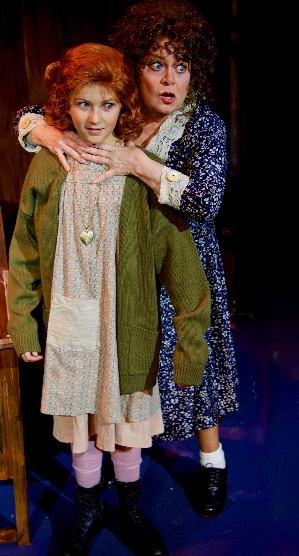 Struthers, whose playbill bio reinforces that she has considerable stage experience, expertly mugs her way through Miss Hannigan’s gyrations without ever winking at the audience that “Hey, this is Sally.” Those decades of performing have given her a trunk full of tricks plus classic comic timing. When the orphans are cavorting out of control, she pop her head in the dormitory and with a gravely, scratchy screetch, she growls, “Did I hear happiness in here?”

By the way, she seemed an egoless trouper, especially in the curtain call opening night. She held hands and nudged her colleagues with affection, and, although she was the headliner, she took her bow before Ella and Dvorsky in the third slot – precisely where it should be.

As she must, Ella has the requisite trumpet of a voice and her experience with the part means she comfortably negotiates every bit of Charles Strouse’s music and Martin Charnin’s lyrics. She’s a pro, so it’s fair to observe that her acting lacks that the fire and innate appeal that would push the production into the tear-inducing territory that is possible. The best Annies exude the scrappy sense of someone who still has hope while thoroughly street-smart. But Ella has those “Tomorrow” pipes that know every nuance in the music. The part will be played on Thursday matinees and evenings by Alexa LaSanta who won applause as one of the leads last season in Slow Burn Theatre Company’s The Secret Garden.

Dvorsky, who scored in the Wick’s Man of La Mancha and seems to have played most of the leads in the musical theater canon, is also at home as the man who has everything but love.

The rest of the cast is solid as well: Aaron Bower (Muriel in Dirty Rotten Scoundrels) as the warm but elegant assistant Grace (one of the most thankless female roles in musical theater); Tony Edgerton as the snake-oil salesman Rooster; Mia Matthews showing off her comic chops as the floozy Lily St. Regis (named for the hotel where we bet she was conceived); and Barry Tarallo in his second outing as FDR.

Joerder is an old hand at this kind of show, but once again, he has a signature of inserting scores of little bits of business that give an extra gift to those paying attention. For instance, when the kids are gathered at Warbucks for Christmas, once of the moppets pops her head up at an inappropriate moment. Joerder has Grace subtly gently push her popped up head down into the crowd. Very funny.

Kudos are due Alsford’s musical direction and the Wick deserves notice that once again the theater has shelled out for a live eight-person band including brass. As praise-worthy and rare as that is, the sound seemed to lack a bit of heft that another couple of players might have provided.

A few odds and ends:

—The Wick is one of the very few companies who appoint members of the company to serve as understudies.

—Once again, Josieu T. Jean has enhanced the evening with his nimble evocative projections, starting with a show during the overture in which the color cartoon versions of Annie and Sandy wander through a dozen black and white vistas of Depression Era New York City.

Annie remains one of the most reliable family-friendly offerings and the Wick proves that you can’t resist thirteen orphans and a dog. 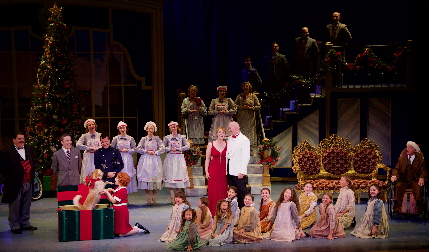 One Response to Wick’s Annie With Sally Struthers Reliably Entertaining