In theater, that most mutable and evolving art form, the passage of time is the forgotten factor in what the audiences see.

Audiences forget that, depending on when you see a show, some facets improve, some deteriorate, emphases change, performers settle into the rhythm of the material, some finally remember their lines, technical problems are ironed out, actors find new depths in the script and suddenly soar, actors get bored and coast.

So while having critics review a show opening night is unavoidable, even necessary, it’s also problematic. What a patron sees a week or three later in run may not be what the opening night audience saw. The vagaries of human interaction and audience temperament guarantee that no two evenings will be identical (although the technician Laurence Olivier legendarily could duplicate much of his performance night after night.) That’s one of the glories of live theater.

This came into focus in recent months thanks to several South Florida productions.

The most striking was GableStage’s Venus In Fur in November. My take on opening night was filled with praise, particularly for Betsy Graver’s nimble shuttling between two characterizations. But I still had trouble comprehending David Ives’ script that I had seen on Broadway. Graver’s partner in the two-hander, Matthew William Chizever (who reportedly had a cold) was serviceable, but did not stand out. 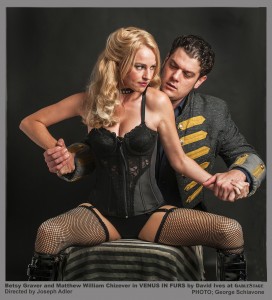 My wife had been out of town and wanted to see the show, so we went back about a week or so later. Graver had burrowed even deeper into the part and Chizever was now her absolute equal. They had the rhythms of the language and the arc of the play nailed down. And finally, this third time that I saw this script on stage, these actors made this complex swirl comprehensible – a dizzying pas de deux of power and sexual politics.

When the Naked Stage premiered A Man Puts On A Play in November, several observers, including this one, were at first enchanted by the idea of watching stagehands build a set in front of them in the first act. But most folks got a little antsy as the project went on about 52 minutes on opening night. But within a few days, the curtain raiser had been honed down to 28 minutes.

At the Maltz Jupiter Theatre in November, Amadeus opened to reviews that carped that the lighting was so dim (among other problems) that patrons had trouble seeing the actors making major speeches. After the opening, Producing Artistic Director Andrew Kato told the staff to take another look at the lighting among other issues and alterations were made.

Sometimes, when a critic gets the “what the heck show did you see” email from a patron late in a run, it’s because the cast has changed. Broward Stage Door had such successful runs this summer with The Immigrant and A Shanya Maidel that several cast members were replaced when the schedules were extended.

Often shows improve markedly after opening because casts and crews have such a short period to ramp up a production in South Florida regional theaters. It’s usually about two and half weeks of rehearsals, three weeks if they’re lucky.

Most companies have one or two days of “previews” to get a sense how the reaction of a live audience will change the show. Broward Stage Door is one of the few companies that insist on a week of “previews,” although they charge the same ticket price. The Broadway habit of two to three weeks of previews after four weeks of rehearsal is unusual anywhere else in the country, Spider-man and Glengarry Glen Ross notwithstanding. Those producers build the cost of previews into the production budget, but they have deeper pockets than anyone locally.

In fact, post-opening night changes are rare anywhere, other than actors continuing to dig into their characters. You may wonder why producers, directors, actors and playwrights don’t fine tune or even overhaul shows more often, especially when a particular section “isn’t working.” A few do, like Joseph Adler at GableStage, but usually few do.

Several reasons: First, if the show is directed, choreographed, lit or designed by a freelancer, the personnel have almost always moved on to their next assignment, sometimes in another city. Second, calling actors back into rehearsal may cost more money, especially if they are Equity members. Third, a show is “frozen” a day or so before opening so that actors and stage managers can find a reliably consistent rhythm to work within.

But never underestimate that the show the opening audience sees may not be what you see if you go near the end of the run. Case in point: On opening night of the Plaza Theatre’s production of Driving Miss Daisy in October, the performances were unassailably solid but not exceptional. There have been better productions of this warhorse. But a few weeks later, I was comparing notes with a demanding clear-eyed producer who saw the last performance. That final scene between actors Harriet Oser and John Archie in which the elderly matron expresses her lifelong friendship for her chauffeur? The tough producer was in tears.