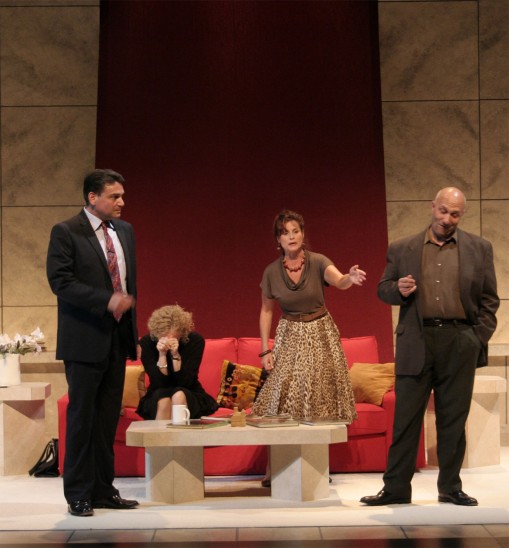 "God of Carnage" will open Friday night at the Caldwell Theatre.

When regional theaters vie to be the first to mount a recent Broadway hit, the local actors often have seen the world premiere production. Their challenge is shaking off the inhibiting ghosts of the previous edition and creating a fresh experience for the audience.

That won’t be a problem on Friday at the Caldwell Theatre’s’opening of’God of Carnage, even though a quarter-million people saw the 2009 comedy about a civilized gathering that devolves into a vicious free-for-all.

That’s because director Kenneth Kay and his four cast members have never seen it.

‘This is going to be’our production,’ said actress Kim Ostrenko, who plays the mother in one of the two couples sorting out why their sons fought on the playground.

It’s also because the script by Yasmina Reza is primarily dialogue, making it nearly impossible to reproduce a cookie-cutter production. That forces Kay and his troupe to divine the intentions, the actions, the movements, what the set looks like, solely by analyzing her words.

‘I love working like that,”said veteran Caldwell leading lady Kim Cozort during an interview after a week of rehearsal. ‘I always take the text first and do what we call scoring, the Uta Hagen thing where you break it into beats and ask what is my intention in this scene, what is the obstacle.’

Kay took it a step further. ‘You pay attention to the punctuation, the commas, the semi-colons’ for clues how to say the lines and what they mean.

Actor Michael Serratore, recently in Nilo Cruz’s’The Color of Desire at Actors Playhouse, said, ‘I don’t really have a theater background, so I always come to (any play) new, no preconceived notions.’ He patted the script. ‘We have the Bible.’

The last member of the quartet, Nick Santa Maria, who played at the Caldwell in’Over the River and Through the Woods a decade ago, gave his spin on it. ‘I come from an improv background. So I welcome the process where you build something up and then hone it down.’

If the performers aren’t overly reverent to the play’s New York celebrity or how it was done there, the Caldwell management certainly appreciates the quality and marketability of what they have. Producing Director Patricia Burdette chased down the rights for months to be the first to produce what has been billed a comedy of manners without the manners.

With good reason.’Carnage was a monster hit on Broadway, in part because of the starry cast (James Gandolfini, Jeff Daniels, Marcia Gay Harden and Hope Davis), but also because of the hypnotic spectacle of people behaving badly. It lost box office steam with replacement actors Janet McTeer, Jimmy Smits, Dylan Baker, Christine Lahti and that legend of the Broadway stage Lucy Liu.

Reza, the French playwright, also has a following among theater patrons who love her oft-produced caustic comedy of bickering adults,’Art. Both scripts were translated by Christopher Hampton whose own work includes the interpersonal savagery of’Les Liaisons Dangereuses.

Carnage starts as an amicable meeting between two upscale Brooklyn couples to sort out their sons’ scuffle. Over the next 90 minutes, their civilized veneer crumbles and the four combatants verbally, psychologically and emotionally slug it out ‘ notable for the moment in which Ostrenko’s character becomes so stressed that she vomits. ‘Don’t sit in the front row,’ she warns.

Although the sociological message about the animal underpinnings of Mankind is clear and the passion can get a touch frightening, the play is mean to be intensely funny.

‘It’s fun finding out why adults act childishly,’ Kay said. ‘It’s a comedy at heart. It’s not’Death of a Salesman ‘ although there are a few laughs in that. It’s an adult’s playground. The set is like a sandbox.’

Cozort added, ‘The question you have to ask yourself is where did these kids learn this (violent behavior)? Did they learn it from parents or other kids?’

Ostrenko nearly finishes her thought. ‘We all know people like this. You see parents at Little League.’

The verbal give and take in the group interview reflected the quick-gelling rapport among the cast, Kay said.

Chemistry is essential because the arc of the play is rooted in the relationships and changing allegiances during the evening. At different times, each couple lines up against the other; other times, it’s the men against the women; at times, one character is fighting off the other three.

As a result, no one can coast for a moment or lose track of where they are in the play. ‘You always have to be listening’ to the other actors, Ostrenko said.

But if they are listening, if the byplay works’.