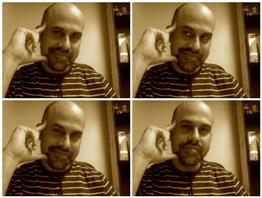 Actor, playwright, designer, dancer, choreographer, artistic director of New Theatre and probably a few other job descriptions we’ve left out, Ricky J. Martinez is one of the most hyphenate artists in mainstream theater in South Florida. It’s what the affable and passionate Martinez calls being a “theatrician.”

Since 2006, Martinez and Managing Director Eileen Suarez have operated the theater founded in 1986 by Rafael De Acha, committed to producing both new plays and classics including Shakespeare. It’s been a tough haul with a varied track record of impressive triumphs and ambitious misses, plus the same battle to hold onto audiences that every theater had faced. But the Martinez, the staff and board have kept New Theatre alive despite a move from its longtime home in Coral Gables to its new base inside the Roxy Theatre near Florida International University.

This weekend is the last one for the world premiere of Road Through Heaven, the second in a trilogy of plays Martinez wrote. He has turned the direction to Margaret Ledford and is starring as one corner of the play’s tempestuous triangular relationship. Many local fans don’t know of his national profile: currently executive secretary of the National New Play Network, served for five years as panelist on the National Endowment for the Arts, sits on the Advisory Board of the Latino Theatre Commons; and directing at play festivals at the Kennedy Center, Stanford University, James Madison University and the University of New Mexico.

For a fuller biography, click here.  What you won’t read there, but you will find out here is Martinez’s connection to the musical saw.

How long have you lived/worked in South Florida? I think this is really one of those clever two-part questions: The first part, before the slash, asking my age and then the second covering up for asking my age. Well, I’m cool with that; I’ve lived and worked here most of my young forty-one years, except for about four years.

What school did you graduate from/what was your major? I attended New World School of Performing Arts downtown and my major was musical theater.

How do your skills as an actor and a director influence your work as a playwright, and visa versa? I would think all my skills are interrelated; they draw constantly from each other.  For me, the cores of all three being breath, rhythm, imagery, intonation and how to house those all successfully enough to then be able to incorporate them physically into action/meaning.  As the director and playwright you have got the bigger picture to see/portray and as the actor you have a smaller rendition of that picture to execute.

What is the challenge of acting under someone else’s direction of a play that you wrote?  It’s been a wonderfully awing experience! — one that has shown me how much I truly value removing any sort of ego from process.  The challenge is simple: Hire a director you can fully trust to direct you in the play you wrote and then be able to surrender to that trust.  You’ve got to understand as a playwright, and this is what I’ve learnt from directing world premieres, that a director sees your words/characters/intentions/etc… and beyond, if you trust that… and have a solid week of workshop where you can be the playwright, then let go to become actor… you’re golden!

Whose work as a playwright has influenced you most and how? Wow, there are so many, my list could take up the rest of this interview… on this specific trilogy, I’d say classic Spanish writers such as Cervantes, Calderon, Vega, Lorca; more contemporary writers like Arenas, Neruda, Garcia Marquez, Fornes; also American and European writers like Ionesco, Howe, McDonagh…. I think these writers influence me because they aren’t afraid of bold imagery and concepts, chewing rhythms and words, and spitting out the philosophy of the soul.

New Theatre has a history of color-blind casting. When does color blind casting work and when does it not work? I think it always works when you believe in your community of artists.  When you are not afraid to represent your communities’ diversity but in fact, want to empower it.  It doesn’t work when there are limitations.

How has the move to the Roxy affected your company? This is a question for a whole other article… but I’ll give you a short, honest answer.  I don’t think anyone, who hasn’t moved a whole theater, knows how difficult the experience of moving can be, on all levels and aspects!  But ultimately, moving to the Roxy has been a liberating experience and has allowed us to redefine what we want New Theatre’s future to become.

When you are choosing a season, what exactly do you look for? Are you seeking a balance or specific types of shows? Because NT is a fusion of classic theater, modern theater, and new works, balance is very important, but so I revolve selections on a certain theme for the season.  I’m intrigued by richly character-driven plays that have unique voices — unheard voices in our community — whose structure pushes boundaries, work that will stimulate discussion.

What role/play/design project are you dying to do but no one would think of you for? Can I answer this from each of my hats??  As an actor:  Sweeney Todd; as director: Theory of Total Blame by Karen Finley; as a designer: Emperor Jones

What show do you wish somebody down here would produce? Any Vaclav Havel play!

What show will you be happy never to see again unless it gets you a job? The Complete Works of William Shakespeare Abridged.

What’s the hardest part of what you do? Finding the money to provide a home for creation.

Do you have unexpected special talents and skills? I play the musical saw.

Do you get stage fright? If so, how do you cope with it? I look forward to getting stage fright; it makes me focus more, surrender more, to my fellow actors.

How do you wind down and leave the work behind? Take a breath; take my costume off; have a shot of some sort of strong alcohol… then another… and then I’m good to go.

What was the first show you were involved in and what did you do? OMG, it was The Pied Piper!  I was the piper and got to lead the kindergarteners to their death, twice!!  Everyone applauded for it.  I was hooked… yikes…

What do think has been your best work in the theater to date, and why? Best and worst is relative, isn’t it?  But I think my best work has to do with being able to keep our theater alive through the countless hurdles placed in our way, (the ability) to pick everyone involved, including myself, up after harsh reviews on some of our most moving, risky, new works, (the ability) to start many actors/designers’ careers while maintaining strong relationships with those artists who already proudly call New Theatre their home.  And to do that unconditionally.

What do you think was your worst, and why didn’t it work? I don’t think I could possible have a worst, until the day I ever decide to leave the theater.

What one role/show would like to do over or just do again? I’m not much about re-living the past, but I know I’d be a much stronger Don Quixote now than when I toured.

What was the worst on-stage mishap you dealt with? Doing West Side Story and actually getting punched so hard I bit a tiny piece of my tongue off!  UGH!  It wasn’t the pain that killed me it was the fact that now I had to over-over-enunciate!! lol

What’s the weirdest/worst non-theater job you ever had? Oh, I’ve had many of these… working at Riverboat Playhouse, which doesn’t exist anymore but was the equivalent to a Chucky Cheese.  On weekends, we’d dread having to clean out that pit full of multi-colored balls kids jump into… ‘cause we’d find all sorts of nasty things in there!!  Not pleasant!!

What did your parents think of your profession?  If you haven’t told them yet, what do they think you do? My father, may-he-rest-in-peace, (so Cuban of me, sorry), initially hated the fact I wanted to be in the performing arts — until he found out I starved and struggled for many years and never called him for money, simply to be able to do, proudly, what I wanted.  He changed his mind the year before I lost him, so I was incredibly grateful to know I was able to show him my love and honor for what I do.  My mom always supported me, secretly from him, and loved the fact that I was the only one of her children who took after her!

What would you do if you couldn’t be in theater? You mean I have other options??

What is your favorite line from any play or musical?  “Mine honour is my life; both grow in one; take honour from me and my life is done.” (Shakespeare’s Richard II)

What is the one performance you attended that you’ll never forget? Matador at the then existent Coconut Grove Playhouse.

What’s your most unforgettable theater experience? Mentoring sessions with both Arthur Kopit and Tina Howe; they were so grounded and down to earth yet floated gracefully above any ego they could have merited.

What do you say when someone you like is in a terrible show or does a poor job? Only if asked, do I ever say anything, but I point out the strengths and weaknesses I observed.  Then I take them out for a drink and cheer to the next one!

How do you cope when there are more people on stage than in the audience?  I feel honored that they are there and do, equally, my best.

What TV programs do you DVR when you’re working a show? I don’t own a DVR or have cable; never home.  But when I watch TV on my computer, I watch Game of Thrones, Walking Dead, Doctor Who and Downton Abbey.

Whose music can you not live without? Radiohead, Nina Simone, Byjork, Mutemath, Jeff Buckley, Birdy…

If you could change the theater community in any way, what would you suggest? I would challenge us to band together and create a theater row.

Why doesn’t South Florida theater have a higher profile nationally? I’ll answer with a question:  If we don’t support new works being cultivated in our own town, if we don’t back our own artists, how do we expect to have a higher national profile?

If you could change the Carbonells in any way, what would you do? I’d encourage that there be a small theatre, medium theatre, and large theatre category for best production and best new works.

Finally, add a question you wish I had asked. I’ve got a few. What do you think the relationship between a critic and a new work should be?  What’s your role in this community and do you think you meet its expectations?  What is your next project?  What does theater mean to you?  What theater in SoFla have you not attended, yet?

This entry was posted in Features and tagged New Theatre, Ricky J. Martinez. Bookmark the permalink.