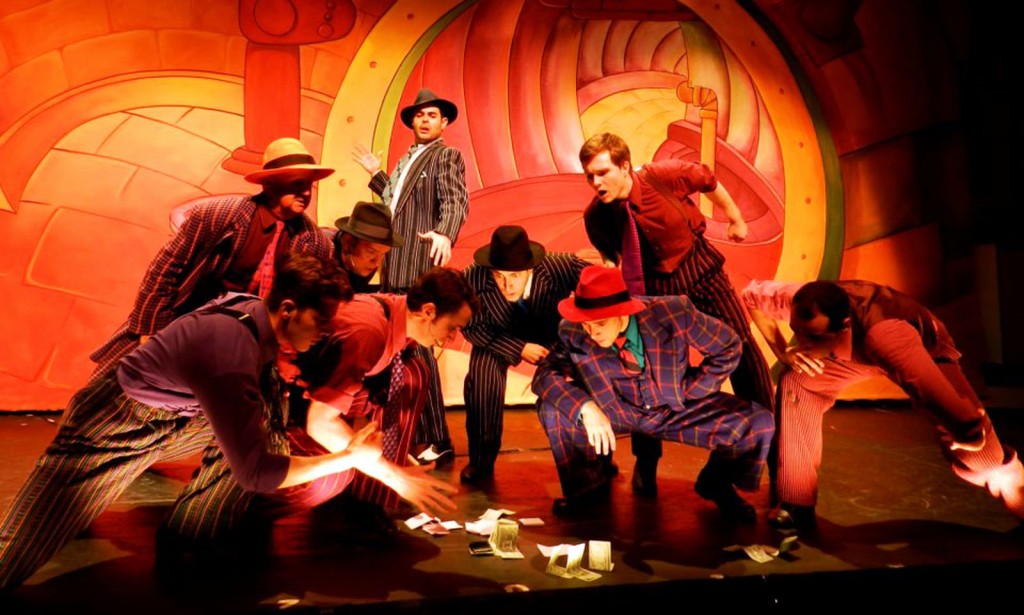 Adam Bashian, standing at the back, rolls the dice on the bet of his life as Sky Masterson in Guys and Dolls / Photo by David Torres

Among the inexplicable mysteries of life are how does a hummingbird fly, how can the Kardashians have a television show, and how can Broward Stage Door keep producing engaging shows like The Drowsy Chaperone and The Light in the Piazza and then revert to such misfires as Mame and, now, Guys and Dolls.

Witty, tuneful and deftly constructed, the Frank Loesser-Abe Burrows musical comedy is generally considered among the five finest musical comedies of all time (fill out the rest of the list yourself).

But while this edition has some talented artists named in the playbill, this is no one’s best work, to be kind about it.

The most glaring problem is that only one performer – Jill Taylor Anthony as the eternally left-at-the-altar Adelaide – has even a clue to classic comic timing, despite being presented with some of funniest lines ever written for the stage. Joke after joke, gag after gag fall flatter than the ratings for the new Charlie’s Angels TV reboot.

Burrows must be spinning in his grave at 1000 rpms when lines like “I’ve been running a crap game since I was a juvenile delinquent” don’t get even a giggle.

At a minimum, these folks need to be forced to spend two solid days listening to the rhythms of 1950s and 1960s sitcoms, or every Hope and Crosby road movie, or even a single Marx Brothers flick.

For you youngsters, Guys and Dolls is a fairy tale vision of 1930s-1940s Manhattan based on the short stories of Damon Runyon. He spun tales of dapper gamblers who talked as if their mouth was filled with marbles, peroxide chorines with loose morals, hard-boiled cops and a host of lovable quirky characters inhabiting a mythical Times Square – people with names like Nicely-Nicely Johnson, Angie the Ox and Big Jule (pronounced as in Jule Styne).

The result in 1950 was theatrical magic, all of which was nearly non-existent in this production directed by Dan Kelley, who did a superb job with The Drowsy Chaperone last season.

Several actors including Bashian and Amaya have solid voices, but only Anthony as the nightclub headliner who sounds like an unmuted trumpet is acting convincingly while she sings.

Bashian is emblematic of the show in that he’s good-looking, has an enviable baritone but no charisma. And someone needs to tell him to shave. This isn’t a GQ cover. In 1950s Runyonland, only street bums have a five o’ clock shadow; Bashian’s qualifies as a 9 p.m. shadow

Amaya, who was Marian in Stage Door’s The Music Man last season, once again has a soaring soprano and pleasant persona, but she doesn’t exude the suppressed sexiness that Sarah must have. And she has almost no chemistry with Bashian.

Lore, given the best laugh lines in the show, squanders them all, usually by barreling right through one line to the next without allowing anyone in the audience a breath to laugh, assuming they would.

Missteps can be found in every department. The set design by the usually brilliant Sean McClelland (he just did a lovely job with Captiva) leaves the dancers almost no space to perform in. That’s OK because the usually imaginative choreographer Chrissi Ardito has simply borrowed moves from earlier shows.

The costumes. Good grief. We know the gamblers are supposed to be dressed in a somewhat exaggerated, even cartoonish garb. But these numbers chosen from the Costume World collection (apparently created for the 1992 New York version) are (a) shades of purple (because everyone knows gamblers are partial to purple) and (b) pinstripe patterns so broad that they look like a clothes rack backstage at Barnum & Bailey’s Klown Kollege.

The recorded music tracks, usually so well done by David Cohen, have been rented here from Aztec Showtrax and they are awful – heavy on the snare drum, tempi so fast that singers can’t caress the lyrics, etc. etc.

The lighting: Sky takes Sarah to Cuba for a night on the town, but apparently it must be daylight savings time because the star-lit plaza blazed as if were noon.  Similarly, when Sky sings his big solo “Luck Be a Lady” in a crap game played in the subterranean depths of NYC’s sewers, somebody gooses the light levels to what you’d find in a Kansas wheat field.

The female cabaret dancers were so-so (they’re not supposed to be especially adept), but the male dancers were so clumsy and sloppy that it wasn’t surprising when one chorus boy bungled a lift with a female partner. The famed crap shooters’ dance number in the sewer, done here with moves that seemed very similar to those of Michael Kidd’s original, were executed with an almost lackadaisical effort. What are the antonyms for crisp and sexy?

And yet, the base material is so strong that even this crew occasionally reaches the actual level of adequate entertainment. The roof-raising numbers Sit Down You’re Rockin’ the Boat, the title number and the finale had all the qualities the rest of the show lacked.

Guys and Dolls may be among the last shows produced under the Derelle Bunn/David Torres administration (although they will help the new owner Costume World for the rest of the season). For a company that has delivered so many solid, entertaining shows, this is a sad one to go out on.

This entry was posted in General and tagged Dan Kelley, Guys and Dolls. Bookmark the permalink.