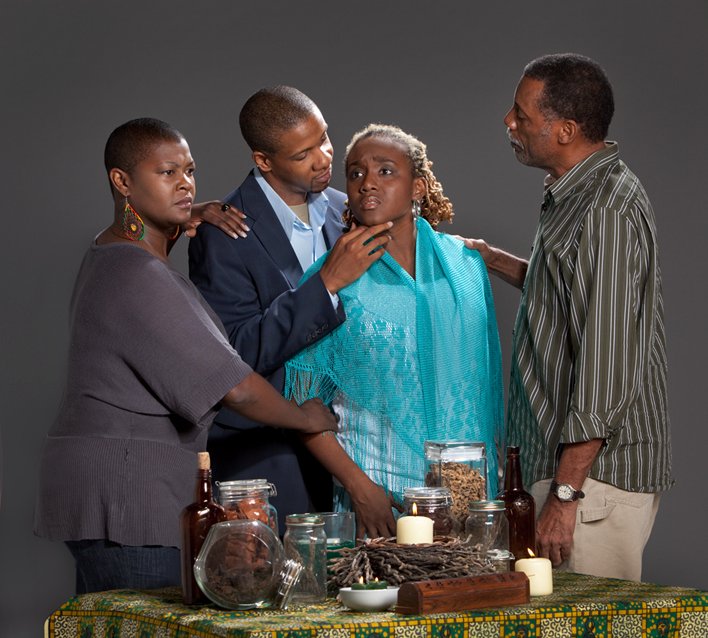 The poison that the abandoned wife Billie is concocting on her kitchen table for her husband Othello is just a metaphor for the toxicity of African American history on male-female relations in M Ensemble’s wildly uneven production of Harlem Duet.

Playwright Djanet Sears has crafted an intriguing contemplation of the intersection of the macro issue of race on the micro-dynamics of an individual marriage.

But Sears’ insightful script gets a hodgepodge treatment in M Ensemble’s production. Under the leadership of Artistic Director Lowell Williams, this edition is by turns subtle and overly-melodramatic, illuminating and opaque, clear and confusing. Some performances are deeply affecting and touching, some are just plain affected and stilted – sometimes from the same actor.

Harlem Duet is not a modern retelling of Othello or a prequel to it. But it does use Shakespeare’s central conceit of a black man who falls in love with a white woman as the jumping off point for a meditation on how centuries of struggling for freedom, identity and self-respect produced tragic aftershocks for its beneficiaries.

Unfortunately, the tone of the evening is so inconsistent that what may have be envisioned by Sears as a seamless piece comes off here as a mélange of clashing styles: historical pageant, domestic drama, sociological treatise and, believe it or not, a Tyler Perry sitcom. The evening seems a half-hour too long because we can’t always see the need for all those dissimilar facets.

Set primarily in the present-day Harlem, we meet Billie (Christina Alexander), a grad student who Sears invests with a bent for poetic dialogue and an acute sense of racial history. She is suffering from a crippling depression because her husband of nine years, Othello (Ethan Henry) is leaving her to marry a white woman, Mona (as in Desdemona, get it?). Othello is trying to succeed as an educator at Columbia University by rejecting his ethnicity as a defining element of his life, egged on by his unseen colleague Chris Iago who supports Othello’s opposition to affirmative action.

“I am not my skin. My skin is not me,” Othello tells Billie. He says that when he is having sex with Mona, it is two individuals making love. When he is sleeping with Billie, he feels she has superimposed the unresolved issues of every African American man and woman.

Billie, on the other hand, embraces her heritage and glories in Harlem as a liberating haven where African Americans can fulfill their potential. She sees Othello’s pursuit of Mona not simply as a rejection of her, but of all African American women and, in fact, his very racial identity.

It is in their long debates about race that the two lead actors, the production and the script come alive, although that comes 40 minutes into the play. Sears’ 1997 script contains a torrent of thought-provoking observations and the sparring chemistry of Alexander and Henry elevates these scenes into the play Harlem Duet should have been all along.

Billie is consoled by her friend and landlord (a vibrant Rachel Finley) and her sister-in-law (Yaya Browne), and finally by her estranged father (the always dependable John Archie). But dramaturgically, the break has already occurred so not much actually happens other than Billie’s mind slowly coming unhinged in a tragic spiral in which it is Billie, not Othello, undone by jealousy and bitterness.

The flow of the play is hard to follow. With no warning or explanation, the story shuttles back to couples in 1928 and 1860.  By the time play ends, we have some idea that the man in 1928 is a classical actor reduced to playing blackface in a minstrel show and the 1860 couple is considering going to Canada on the Underground Railroad. But none of that is clear until late in the second act.

The staging is also variable. A handful of scenes have Billie sitting on the floor. Besides the audience not being able to hear or understand her, only the people in the first row and the aisles could see her. Othello, having had sex with someone he shouldn’t,  leaves an apartment bare-chested and barefoot, even though he knows Mona is waiting in the hall. Sound clips of speeches by Martin Luther King Jr. and other leaders, used to cover scene changes, are sometimes clarion clear and other times aural mush.

The play may be called a duet, but the burden rests on Alexander’s shoulders. Her performance is also all over the landscape. She can pierce your heart at times, especially as she descends into madness; other times she is so melodramatically overwrought and mannered that she veers dangerously close to being a cartoon.

Henry is uniformly strong and brings out the best in his scene partners. But it’s still a halting, unsure acting performance compared to his deft incarnation of the tainted drug counselor in GableStage’s The Motherf**er with the Hat a few weeks ago. He has one scene when his 1928 character recites a speech from Shakespeare’s Othello with such promised potential that we yearn to see Henry actually play that role for someone locally.

Archie, one of the region’s strongest actors, turns in another fine portrait. He digs deeply into the truth of the scenes where the father, suffused with shame and guilt, tries to reconnect with his daughter. But this has to be the fourth or fifth time we’ve seen him give a nearly identical characterization of a charismatic ne’er-do-well on the brink of codger-dom. He does it so very well, but we’d like to see a director demand Archie stretch himself.

M Ensemble, reputedly the oldest continuing African American theater in Florida,  has the courage and commitment to provide South Florida with a platform for voices and visions we’d otherwise lack and be the poorer for without. But the quality of its work has always veered from exemplary to ham-handed.

Much of Harlem Duet falls in the plus column; in fact, it ranks as one of their best productions. But it remains seriously flawed.