Promethean’s Swan Song, The Unseen, Is A Hell Of An Exit. 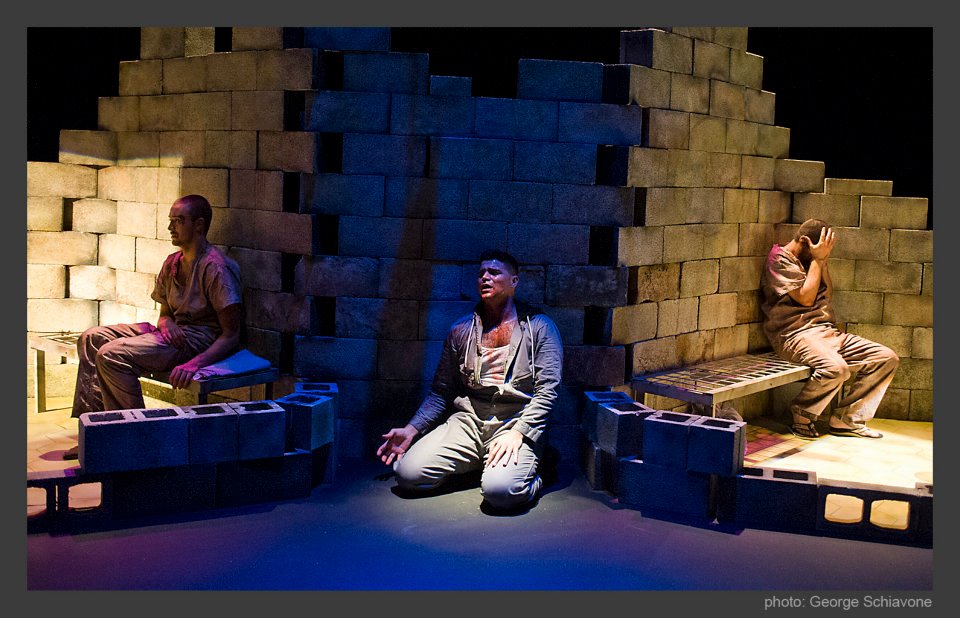 The cruel irony is that The Unseen, the last show before The Promethean Theatre closes its doors forever, is one of the finest productions that the company has mounted in its eight-year history.

Craig Wright’s tale depicting two political prisoners tortured in a Kafkaesque dungeon is one of the most incisive explorations of existentialism since Waiting For Godot and No Exit. But the script is elevated to agonizing, visceral life by actors Antonio Amadeo, Andrew Wind and Alex Alvarez, led by the inestimable insight of director Margaret M. Ledford.

Be warned: The Unseen is definitely not for everyone. It is designed for audience members who prize theater as a crucible of challenging ideas and unsettling emotions. This often bleak, deeply intellectual, highly metaphorical work will horrify some people, even bore audiences unwilling to invest their own analytical skills in decoding an evening of drama. It occasionally dances on the precipice of losing the audience in the lengthy Byzantine tunnels of its characters’ insane musings. But the faithful can be assured: You’re in good hands.

Before the house lights dim, the prisoner Valdez is sprawled across a filthy cell, aimlessly changing his body’s position, scratching the walls with a spoon, listening to the dripping of a water of a leaky pipe somewhere deep in the bowels of this nameless prison in a nameless totalitarian country. A brutish guard hauls in Wallace, fresh from a torture session, and tosses him in another cell. The two cells are separated by a third that they and we cannot see into.

Living in their isolated worlds, the two have never seen each other, but speak to each other through the ancient walls. Their banter reveals they have been imprisoned for 11 years, tortured almost daily in unspeakable ways without any idea why. They have long ago confessed anything and everything, but the torture continues mindlessly.

They have little in common but their genetic makeup as human beings and their shared hell. Wallace (Wind) is an understandably dour, hyper-articulate intellectual with an obsessive belief in reason. Valdez (Amadeo) is more instinctive, seemingly more imaginative and even playful. In fact, their repartee is shot through with large and frequent dollops of gallows humor that keep The Unseen from being unrelieved tragedy.

We listen as they spar, play mental games for exercise and trade increasingly intricate invented scenarios of life outside their cells. Their corkscrew logic betrays that their minds have been as irretrievably damaged as their bodies.

But several developments change the routine, starting with unprecedented admissions from their torturer (Alvarez) and ratcheting up with the sound of code-like scratching coming from the middle cell — the realization that there may be a new prisoner. Valdez in particular builds a complex imagining of what the newcomer’s scratches mean. Wallace believes it’s simply wishful thinking: “You see constellations where there are only stars.”

All the elements collide into a stunning and unexpected finale affectingly staged by Ledford.

Other than the sustained metaphysical tone, the near-poetic verbiage and the Everyman approach, Wright’s 2007 drama is light years from his gentle upbeat tale of The Pavilion, produced at Florida Stage in 2001. There is nothing gentle here. Deep into the evening, there is a gruesome description of an offstage torture session, related in such squirm-inducing detail and delivered with such empathetic agony by the teller that the word harrowing hardly covers it.

This dark, dense script is crammed with accessible metaphors that reach far beyond moral issues about Abu Ghraib, Gitmo and extraordinary rendition. For instance, the possible unseen occupant of the center cell is obviously a reference to a silent God who may or may not be there. The separation of the two men refers to the isolation of human beings. And so on.

Ledford long ago proved her skill at keeping weighty ideas engrossing by grounding them in the behavior of people we recognize from our own lives. But here she meets the considerable challenge of preventing two guys standing around in claustrophobic cells and talking all night from becoming a static tableau. Her prisoners are only at rest when they are too emotionally pole-axed to move. Much of the time they are playing with a pail, scratching formulas on stone, standing on beds, hugging walls and twisting their bodies into dozens of angular positions.

With her guidance, the actors fearlessly mine the depths of despair, hope, madness, humor, comradeship, anger and fear with complete credibility. Ingeniously, their tone is intentionally muted much of the time. These people have experienced more than a decade of horror and they are nearly, but not completely, numbed to dehumanizing excess.

Wind, who was just adequate in Rising Action’s As Bees in Honey Drown last fall, delivers a strong portrait of a man whose haunted eyes reveal that he knows his worship of reason is meaningless in a life of arbitrariness. Fitting his character, Wind is saddled with Wright’s most convoluted and purplish speeches, but he makes them convincing and palatable.

Blessed with an innate geniality, Amadeo is almost a brand name in his reliability in portraying an amiable human being you might have just spoken to at a slow pitch softball game. We’ve seen him use this character of a slightly daffy naif before, but his warmth and humor is a perfect foil to Wind’s cold Wallace.

Alvarez only has two scenes, but he is terrifying in his rage at feelings he is does not want to acknowledge. His operatic fury is so powerful that it is nearly impossible to recall him as the amiable gay cousin he created for GableStage’s recent The Motherf***er With The Hat.

Promethean’s veteran creative team has outdone itself in creating the sights and sound of this nightmare. David Radunsky accentuates the bleak scene with his focused spotlights and more subtle lighting shifts as emotions change. Dan Gelbmann’s honeycomb-shaped cells seems simple, but is masterfully designed, painted and decorated. Special mention is due sound designer Matt Corey: Not only does he provides the ominous soundscape of maddingly random buzzes, beeps, clicks and sirens designed to unhinge the prisoners, but he has dropped in a subtle underscoring of unearthly mechanical noises of no recognizable origin. The actual quality of the sounds in the black box theater, the approaching and fading, the atmospheric noises such as the dripping water, are so lifelike as to escape most audience member’s recognition.

Don’t bother waiting for curtain calls to clap, assuming you can shake your stunned psyche to applaud. The cast does not return for a bow. But honor is due in absentia, as is, for once, a standing ovation.

And don’t come late: The Unseen has the best “turn off your cell phones” admonition we’ve ever seen and heard.

Farewell, Promethean, Producing Artistic Director Deborah L. Sherman, Associate Artistic Directors Ledford and Jane G. Duncan, and its roll call of actors and designers. Thank you for eight years of theater you could see nowhere else. The Unseen is a hell of an exit.