OMG, You Guys: Riverside’s Legally Blonde Is A Hoot 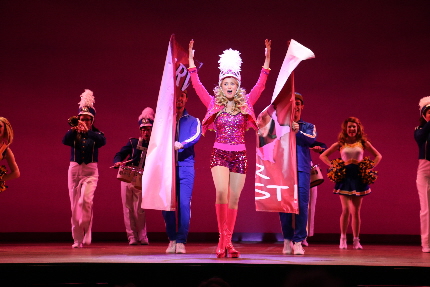 The snappy, bubblegum musical Legally Blonde has come to energetic life at Riverside Theatre, bringing laughs to the unjaded and knocking at the heart of the weary.

The 2007 musical — based on the 2001 Reese Witherspoon movie, based on Amanda Brown’s book – revolves around a perky young woman, Elle, whose signature color is pink. And, yes, she’s got gobs of blonde hair. It is written by Heather Hach with music by Lawrence O’Keefe and Nell Benjamin.

Director/choreographer Richard Stafford keeps the bouncy pace bright and breezy throughout. Dancers fill up the space with gyrating arms and high kicks and fling their bodies this way and that like it’s a televised Dance Party and everyone is doing “The Pony.”

Its opening number, evocative of the opening for 1960’s Bye Bye Birdie, has a flock of UCLA Delta Nu sorority sisters singing “Omigod You Guys,” a song about Elle “totally” getting engaged and peppered with good natured calls to “shut up!”

It will “literally” become an earworm, drowning out other songs coming your way, despite Anne Shuttlesworth and her wonderful 11-piece pit orchestra.

But…Omigod you guys! Riverside Theatre and Philadelphia’s Walnut Street Theatre, where it opens May 14, spent $1,390,513 to co-produce this.

While the look of the show is a bit on the slim side and not exactly the full-on visuals you would expect for a $1.39 million production, Elle, along with her pert pink suit and bedazzled Chihuahua, is here to say that you can have it all.

The plot centers on that idea:

Rather than proposing, Elle’s supercilious boyfriend Warner announces he’s going to Harvard Law where he’ll hopefully find a “Jackie” instead of a “Marilyn” to help him on the political front.

Ever the positive person, Elle (a most adorable Kathryn Brunner) decides the best way to win back Warner is to go to Harvard Law as well.  She scores big on the LSAT and finagles her way into Harvard Law. And no, her parents did not grease any palms, nor she did doctor photographs of her rowing for crew.

Instead, she sends a video…of her with a marching band that has so much energy it’ll leave you exhausted.

Harvard’s head honchos decide it would be a good exercise in diversity to admit her. (Oh my god, oh my god, you guys.)

She soon discovers that Warner (Sean Thompson) has a new girlfriend, Vivienne (Lindsey Bliven), the story’s most well rounded character, who begins as Elle’s enemy but ends up her champion.

There’s also the sincere law graduate, Emmett (Elliott Styles), a guy who feels comfy in wrinkled corduroy. You know, even if you never saw the ultra popular movie, that Emmett is the guy for Elle even though they never kiss. Shut up!

Don’t leave out Elle’s new best friend, Paulette (Rebecca Robbins) a hard working hair stylist; and her Delta Nu sister, Brooke (Sara Brophy) who is wrongfully accused of murder and depends on Elle to defend her in court.

There’s slimy lawyer Professor Callahan (strongly portrayed by Paul Schoeffler) who sings that the best lawyers are sharks and the rest are chum. When Callahan makes a move on Elle, she slaps him good and hard. One person in the audience was heard saying “That hurt!”

And, the lesbian and the gay men and a Greek chorus of go-go dancing Delta Nu sisters.

Well it takes a lot of ingredients to make decent bubble gum.  And you will enjoy this show’s pop for sure.

Perhaps we’ve grown sensitive to sugar. Now, jokes about lesbians feel cruel. And stereotypes about gay men feel as wrong as the racist stereotypes of Asians in Anything Goes or Thoroughly Modern Millie. It becomes a little squirmy.

And getting admitted with a perky video? Those woke to privilege better sleep through that one.

Elle says you can have it all. But maybe you can’t.

But wait. Did you see those two adorable trained dogs that win our hearts? Yes they are!

And yeah, watching the UPS guy wiggle his backside is sorta fun. And Vivienne does come around.

Bring on the empty calories.