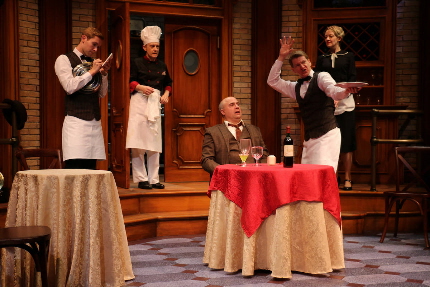 The plates may be empty, but you leave having feasted on Riverside Theatre’s satisfying production of An Empty Plate in the Cafe du Grand Boeuf.

Written in 1994 by Michael Hollinger, this long one-act (no intermission) melancholic comedy has a soupçon of the absurd to it, finished by a dash of the existential. It is set in the Cafe du Grand Boeuf, a beautiful, four-star Parisian restaurant which serves only one patron, its eccentric and wealthy owner, Victor.

But this evening, Victor is in a funk and looks as though he’s been sleeping in his clothes. Holding a folded newspaper, he enters, pauses and speaks: “It was late and everyone had left the cafe except an old man who sat in the shadow the leaves of the tree made against the electric light.” This is a symbolic recitation as it is the first sentence of “A Clean, Well-Lighted Place,” Ernest Hemingway’s short short story about a suicidal old man taking refuge in a cafe he loved. A few seconds later, Victor recites the second sentence and finally the third in the story’s opening paragraph.

Victor soon announces that he plans to kill himself by never eating again. There ensues much talk about the abundance of life, but Victor passes it all off, saying “Appetite is hunger with a hope.” And indeed, poor Victor has none of that.

But the head waiter, Claude, devises a way to awaken that appetite: The chef, Gaston, will prepare a sumptuous dinner in the kitchen, but only empty plates will be set before Victor with Claude describing with mouth-watering delicacy the invisible food which Victor is about to consume.

Throughout, the playwright leaves little crumbs leading us to the truth behind it all. Victor, who was a journalist born to a publishing magnate, feels a hollowness in his life which no food can fill. For this day, the headlines seared with news about Hemingway’s suicide. Add sterility, brain disease, a general malaise and “Death in the Afternoon” bullfighting and you have an emotional bouillabaisse that’s sure to whet one’s intellectual appetite.

With understated sighs and a world-weary knitted brow Jim Van Valen is forlorn perfection in the role of Victor and evokes very much a Paul Giamatti-esque presence. Brian Myers Cooper plays the supercilious head waiter, Claude, with delicious slippery appeal, especially when describing the food, as in:

“White and dark truffles, minutely chopped, brazenly sautéed in olive oil with garlic, shallots and fresh thyme. Mix with a regal dose of heavy cream and add one 20 pound bird executed in full plumage this morning in the Loire Valley.”

A wonderful Andrew Sellon is Gaston, the woebegone chef who does all, no matter how dark, for love. Maria Couch is delightful as Mimi, the Jackie Kennedy-loving waitress and frustrated wife of foppish Claude. Daniel Burns charms as Antoine, the waiter in training, especially when playing “Lady in Spain” on a tuba. And Katherine Puma is an elegant Miss Berger.

Director Allen D. Cornell finds that sweet balance of heartache and wit in this absurd comedy. Mr. Cornell also has designed (with his usual meticulous panache) the beautiful scenery, which seems to float in a black void.

Ahh, and it is beautiful. In the beginning, as the staff prepare for the arrival of “Monsieur” (Victor), everything looks exquisite. Not a crease on any linen napkin. Everything in its place. The candles are lit and the scene is set for an elegant dinner. Claude ushers the hectic staff back into the kitchen and he stands in front of the double swinging doors, looking pleased. Suddenly, one of the doors swings back and hits him in the rump. Yes, order is an illusion. And Claude and his staff are in for a surprise…and so is Victor.

An Empty Plate in the Cafe du Grand Boeuf runs through Feb. 5 in the Waxlax Stage second stage theater at Riverside Theatre. It performs in about one hour 45 minutes without intermission. Tickets are $45. Riverside Theatre is at 3250 Riverside Drive, Vero Beach. Call 772-231-6990 or visit RiversideTheatre.com.

This entry was posted in General, Performances, Reviews and tagged Riverside Theatre. Bookmark the permalink.