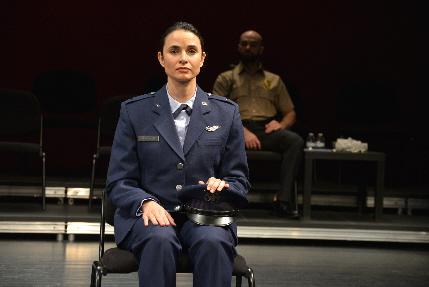 Most courtroom dramas metaphorically use the audience as a jury. But Terror, a German play receiving its U.S. premiere from Miami New Drama this week,  literally requires the audience to vote on the defendant’s guilt or innocence to determine the outcome of the play.

The vote is not a gimmick, but a crucial part of the artistic conception that forces the audience to weigh the fraught moral dilemma. Should a citizen defy the laws or directives from the ruling government if their conscience tells them the order is morally wrong – especially when lives will be lost whichever choice is made?

Simply put, Terror posits that a commercial airplane with 164 people on board has been hijacked by terrorists. The plane is hurtling toward an arena where a capacity crowd of 70,000 has gathered for a sports match. An Air Force pilot shoots down the passenger jet against orders. As the play begins, the pilot is put on trial.

In a major coup for the region, Miami New Drama has hired acclaimed Tony-winner Gregory Mosher, who has helmed 200 plays at Lincoln Center, the Goodman Theater in Chicago and other venues including the Sally Field revival of The Glass Menagerie. He was approached by his former student Michel Hausmann, the founder of Miami New Drama. The fledgling troupe has only produced two other plays since opening about a year ago. But the company has taken over management of the venerable Colony Theatre on Lincoln Road in Miami Beach.

Mosher sees parallels with the ancient classic play Antigone in which conscience conflicts with society or the state. But the issues are a topical as ever, paralleling civilian collateral damage in U.S. air strikes in the Mideast, or the morality of torture that arose weekly on the TV series 24.

“A lot of trials are about did he do it or didn’t he, but she admits it,” Mosher said, noting that sex of the pilot has been changed in this version. “Dramas are based on moral questions – what is best for the city?  So this is really a brain teaser.”

Hausmann added, “I think there’s something about his play that hurts. It’s a complicated war against terrorism. We are forced to see life in a totalitarian way: Well, we can kill this terrorist, but maybe a couple of civilians will die.”

Such questions play into Hausmann’s vision for his company, which produced his own musical last year, The Golem Of Havana that depicted life in Cuba for a Jewish family as Castro took power. He followed it last May with A Special Day inspired by Ettore Scola’s 1977 film that explored the life-changing encounter between an overworked housewife and a mysterious bachelor, set against the backdrop of rising fascism on the day of Hitler’s 1938 visit to Mussolini’s Italy.

“All three pieces relate to a moment in time, all three pieces are a part of the national conversation. I have the belief that theater artists have a responsibility to engage in society and move it forward,” Hausmann said.

The new non-profit theater was born in 2013, began officially forming in 2014 and 2015, and then launched its first production in 2016. Twenty percent of its money comes from Miami Beach and Miami-Dade County, but 80 percent comes from individual donors.

Terror was only written in 2015 by established novelist but first-time playwright Ferdinand von Schirach. But the play already has had at least 59 productions with more than 900 performances, mostly in Germany but also Denmark, Austria, Israel and Japan.

Hausmann first heard about it from a friend producing it in Hausmann’s native Venezuela. He then contacted Mosher who had been a teacher in his theater directing studies at Columbia University. Mosher’s classes on the future of the art form inspired Hausmann to move to Miami and start Miami New Drama (also known as MiND). “Miami was the only major metropolitan area without a major regional theater. But it’s a place where there’s ample theatrical talent from amazing playwright to amazing actors and designers.”

Mosher “has always been somebody who is a great thinker of our times. Gregory is really concerned about the way we behave as a society, the rules of the times, the moral dilemmas,” Hausmann said.

Mosher said he has always been intrigued by Hausmann as well. “I’ve been following (the development of) The Golem of Havana since it was a student project.”

The German script had been translated into English by Davis Tushingham, but it didn’t sit quite right for an American audience. Mosher said he “wrote to von Schirach and asked if any of the productions around the world had been set in the country they were produced in. He said, no, but ‘have fun.’ ” Over three months, Mosher adapted the script, mostly making it fit the American process of jurisprudence.

The director predicted the moral issues “will play much differently here than in Germany.” He laughed. “Germany had a really different 20th Century than America. It speaks to something very deep: Can a person stand above the law, which is a different question in America.”

The production will have minimal visuals, a few tables and chairs, no projections. (“I think people are more interesting than videos,” Mosher said.) The actors giving testimony will recreate scenes from the past. About 40 to 60 audience members will sit on the stage, but everyone in the 415-member audience will be given ballots to hand in. Then the judge’s ruling and her spoken rationale will reflect that vote. Those figures will then be posted along with results of every other production worldwide on the playwright’s website http://terror.theater/en.

Mosher pledged, “It will be very, very intense.”

The cast includes New York actors such as veteran stage actress Maria Tucci whose name might not be well-known but whose face has graced dozens of television shows, as well as local actors such as Gregg Weiner.

In the immediate future, MiND will manage the Colony for both its own productions and as a rental venue for any interested arts producers. But as the number of MiND productions multiplies, Hausmann hopes to have fewer and fewer available slots.

But that may be a ways off. MiND has a roughed out schedule that may be subject to change. Later this year at an unspecified date, the company will revive A Special Day.

Then, powered by a Knight Foundation grant, the troupe is prepping Thornton Wilder’s classic Our Town – with a twist. Reflecting the multi-cultural environment of Miami of various ethnicities living side by side, some of the families will speak Spanish in their households, a move approved by Wilder’s estate, Hausmann said.

It’s a concept that resonates with Hausmann who encouraged Mosher to cast Terror with little regards to the age, sex or ethnicity of the characters created by von Schirach’s original script.

That diversity of the area and its art speaks to the soul of the Venezuelan native.

“Miami is a land of exiles and a place I really feel at home,” he said.