Posted on February 3, 2018 by Bill Hirschman 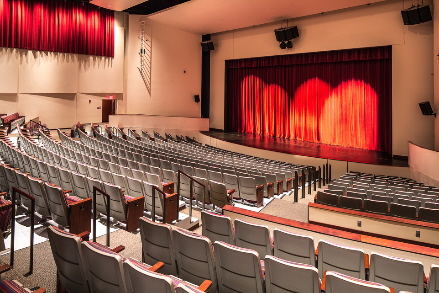 Broward Stage Door, which has weathered a dozen fiscal and artistic highs and lows, will leave the home it established 23 years ago in an abandoned Margate movie house, and move this summer to the new Lauderhill Performing Arts Center.

The two-auditorium complex secreted behind a modest shopping center was sold last fall against the theater owner’s wishes to Conqueror Church which will not renew the lease after the end of this season, said Derelle Bunn, executive producer and the co-founder of the theater.

But the Lauderhill facility that opened in 2016 on the northeast corner of Sunrise Boulevard and State Road 7 will give Stage Door a much larger single auditorium with modern sound and lighting equipment, larger dressing rooms, copious lavatories in the lobby, adequate wing space and, for the first time for Stage Door, fly space above the stage.

While it can accommodate 1,100 patrons, sections of the auditorium initially would be cordoned off to seat Stage Door’s usual 400-plus customers per show.

Stage Door will remain operating in its current space at 8036 West Sample Road until the season ends in August, then open its next season in the Lauderhill facility known as LPAC. Stage Door will have to cut its current slate of 12 shows a year in two side-by-side auditoriums to eight shows a year running in one auditorium for about four weeks each. Subscriptions for next season will go on sale soon at both locations.

Bunn, who organized the company back in 1993 and opened the building two years later, is genuinely excited about the prospect: “It’s the perfect 25th anniversary gift!  LPAC is a brand new modern and up-to-date facility – it has everything we need and more…. The timing for this opportunity couldn’t be better…Being at the Lauderhill Performing Arts Center will give us so much space to grow…  And we’ll even have outside signage!”

But there are hard feelings. The move was not envisioned last fall. Conversations had been percolating for the City of Margate to buy the building from Carolina Springs Plaza Inc. of Doral and rent it to Stage Door for a dollar as part of a campaign to ratchet of the city’s cultural profile, Bunn said. That would have allowed Stage Door to upgrade and expand its problematic facility.

But last winter, Stage Door began subleasing the building to Conqueror Church for once a week services. Bunn said Pastor Aldo L. Souza expressed some vague interest in buying the building but Bunn, knowing of Margate’s interest, said she’d oppose that while she worked with the city. She thought that was the end of the discussion.

But before the city could make a formal offer, the news emerged in September as a surprise to Stage Door that the church had submitted a formal offer to the shopping center owner. While the deal solidified, Bunn tried to explore ways to fight the deal and appealed to city. But the deal was too far along and it closed October 31 for $1.165 million, county records show.

Interviewed last fall, Souza told Florida Theater On Stage that the church had no plans to evict the theater company and he did not believe he had been deceptive with Bunn. He could not be reached for comment this week.

Conqueror Church is affiliated through its officers with More Than Conquerors Ministries Inc. of Coral Springs, a company which has filed annual reports with the Secretary of State’s office as far back as 1995. It describes itself with the state and on various web-based pages as “a non-denominational independent church that is in fellowship with Faith Fellowship Ministries. In Sayreville, New Jersey.” It supports the “inerrancy of Scriptures” meaning infallible in its teachings, “rejects the belief that born again Christians can be possessed by demons,” and opposes “adultery, homosexuality and pornography.”

Besides the bad feelings that Bunn had for what she saw as a backdoor betrayal by church leaders, she clashed with them soon after the sale. For one thing, they arbitrarily took out two rows of seats in one auditorium, costing Bunn income.

Bunn immediately began looking for a new home, exploring several new spaces that have sprung up in recent years, but LPAC seemed the best fit.

Financially, she was actually paying less money in rent to the church than to the shopping center owners, about $7,000 a month to occupy the building 365 days a year. She expects to pay Lauderhill $20,000 rent per show, but they will not be in the building year-round while Lauderhill rents the space out to other acts between Stage Door shows. The $20,000 for a five-show week for four weeks seemed small to Lauderhill which rents the space for $3,000 a night to transient acts. But Bunn said the managers of the site hope the increased traffic from Stage Door’s thousands of subscribers and reliable rents will raise the young facility’s profile in the community.

Lauderhill Commissioner M. Margaret Bates was quoted in a news release, “We welcome Broward Stage Door Theatre Company and all of their patrons to our newly opened Lauderhill Performing Arts Center…. We know they’ll love their new home!”

City commissioners have publically expressed concerns that LPAC was not attracting the kind of events or the size of crowds that they had hoped for. Commissioners agreed last month that the city should pursue creating a non-profit foundation to help raise money for the venue.

Several South Florida theaters have lost audiences when they moved to another venue, but Bunn said some of her patrons have praised the move because the facility has easy access next to the Florida Turnpike. Additionally, many of her patrons are bussed in from senior living centers. While LPAC’s website says parking must be paid for, Bunn said their arrangement with Broward Stage Door is for parking to be free,

Stage Door has suffered and triumphed over the years, serving up traditional musicals and Jewish-themed comedies to primarily an older audience. But over the past decade, Bunn, a champion of the American musicals art form, has been producing titles she loves that might not be as well-known to her senior patrons but which have been artistic successes such as Dreamgirls, A Little Night Music, Parade and The Light in the Piazza. The theater has frequently produced revues of songbooks from the 40s and 50s, but she and director Kevin Black recently have been including revues of 60s and 70s music, which have been well-received by her audience.

One current problem, faced by most regional theaters, is a sharp reduction in season subscription audiences as opposed to patrons who cherrypick titles or decide a few days before arriving. Currently, the highly atypical leader for subscriptions in the region is Maltz Jupiter Theatre with about 8,000 subscribers – a significant figure for almost any regional theater today. But in 2000, Stage Door had about 10,000 season subscribers; now that figure us closer to 3,000.  Back in 2000, the operating budget was about $2 million; now it’s about $1.4 million. Unlike other companies which rely heavily on donors and grants, 94 percent of that budget is earned at the box office. 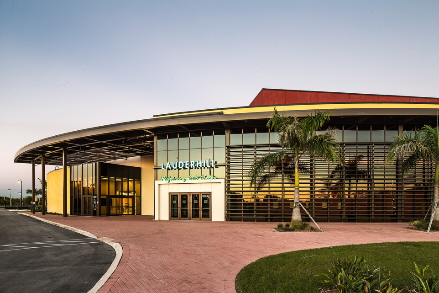 This entry was posted in News and tagged Conqueror Church, Derelle Bunn, LPAC. Bookmark the permalink.