On Golden Pond Is Pleasant Charmer At Dramaworks

Posted on February 4, 2018 by Bill Hirschman 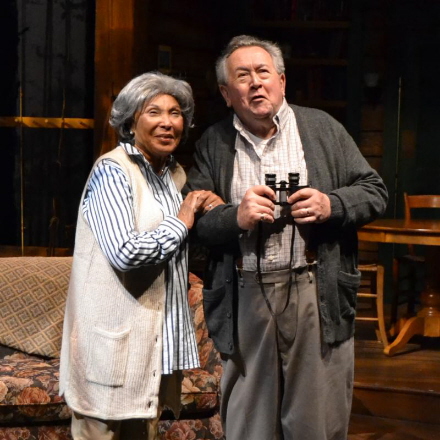 Palm Beach Dramaworks’ production of On Golden Pond is a pleasing charmer suffused with warmth and aided immeasurably by a skilled cast and director. It’s well worth an evening’s divertissement.

But do not go expecting to the kind of vibrance you remember from the 1981 film because, let’s face it, there are few actors no matter how good – and Dramaworks’  actors are unassailable – as Katharine Hepburn, Henry Fonda and even Jane Fonda.

The God-given charisma and supremely honed talent of those actors elevated Ernest Thompson’s folksy cute stage play from 1979 into something moving. It’s unfair to use it as a yardstick, but such an indelible memory will be difficult to ignore.

Thompson’s stage script – not as effective as his Oscar-winning adaptation – still has some touching and resonating scenes of three generations trying to reach across the decades and navigating the shoals of damaging familial baggage to make connections.

These scenes of recriminations and reconciliations, which are too brief, too sketchy on paper, instead work solidly at Dramaworks because director Paul Stancato leads such a skilled cast: John Felix and Pat Bowie as the elderly couple coping with mortality, and Karen Stephens as their bruised daughter who has yet to come to terms with her father’s overbearing unyielding child-rearing. Stancato and company weave the correct autumnal elegiac tone into the evening, but the quieter banked feel cries out for a bit more wattage.

Before we go further, Bowie and Stephens are black, and Felix and Jim Ballard playing Stephens’ boyfriend are white. But what you would imagine might be the elephant in the room isn’t a problem even for three seconds. Dramaworks’ smooth production never acknowledges the racial diversity and the cast creates enough of an illusion of a shared past that the production doesn’t seem like color-blind casting or a stunt. This is just who these people are.

The story focuses on Norman and Ethel Thayer, a deeply loving couple coming back to their Maine lake house for the 48th year in a row. Ethel is an open-hearted 69-year-old. The curmudgeonly Norman will celebrate his 80th birthday this summer and his lifelong fixation about death has amped up to become a frequent topic of their witty bandinage. Yet things are different this year. Norman is, indeed, is struggling with deteriorating eyesight and mental acuity.

In one of the best acted scenes, Norman’s crusty imperturbable façade collapses into despair because he was unable to recognize where he was on a walk a few feet from the house. Felix’s scene doesn’t last long, but its familiarity will rattle seniors and their middle-aged children.

They are visited by daughter Chelsea, a 42-year-old divorcee whose life has been blighted by her father’s inability to nurture her during childhood. She has a brought her new boyfriend, the dentist Bill Ray and his 15-year-old son, Billy Ray Jr., in full adolescent mode.

Ancient wounds reopen. Chelsea says late in the play trying to reconnect, “It just seems like we’ve been mad at each other for so long.” To which Norman says with a truthful directness that ignores its hurtfulness, “I didn’t think we were mad; I just thought we didn’t like each other.”

Although Norman’s track record dealing with children has only gotten worse, the couple host Billy while the adults go on vacation. No surprise, the two skipping generations somehow bond during the ensuing month. When Chelsea returns, now married to Bill, she tries to repair relations with Norman and they reach a tentative connection.

Local veteran John Felix stepped into Norman’s role when the original actor (who is black by the way) dropped out. The play belongs to him although his interpretation is different than others you’ve seen.

His Norman, an owlish retired English professor, is the smartest person in the room, but Felix delivers Norman’s witty ripostes as intentionally blithe and seemingly off-the-cuff as humanly possible. Norman is not doing it to impress anyone. His quick-wittedness and ability to run rings around any other conversationalist is just a private source of amusement rather than a challenge of oneupsmanship. But Felix also makes it Norman’s armor to keep out people and feelings, especially as he becomes more vulnerable to mortality tapping on his shoulder.

Felix and Stancato’s choice to restrain his emotions are on target, but they also rob Norman of the extra zing his characterization could benefit from. As a result, we don’t see the complex inner reaction he has to Chelsea’s return that would document and justify the lasting antipathy she feels. It’s still a nuanced and skilled performance with Felix sporting a pouty downturned frown and gruff ragged voice that once was mellifluous.

Stephens has a wide range of characterizations at her command from comic numbers in Summer Shorts to the victim’s complex mother in Doubt to the pragmatic survivor in Motherland.  But what civilians don’t recognize is how deeply she inhabits any character, no more so than in quietly troubled everyday people like Chelsea. She invests the underwritten Chelsea with nuances that speak to the troubled history she has with Norman. Stephens/Chelsea enters the play warmly greeting her beloved mother. But Norman is outside and Chelsea emanates a beaming but sickly bemused smile and the sparkling defensive eyes of someone who knows they are walking back into a world that will re-summon and reinforce afresh a maelstrom of emotional pain. She communicates the lasting wounds, but not Jane Fonda’s wise choice of someone who should stop blaming her parents for her rootlessness and just get on with her life.

Bowie, who triumphed as Lena Younger in Dramaworks’ A Raisin in the Sun, has the toughest role as Ethel whose primary task is to be concerned about Norman and to exude that well-tested and sustaining connection with someone who has spent his life keeping most people at arms’ length. The role of peacemaker and caretaker doesn’t have a lot of colors to it, but fortunately she’s more than up to making Ethel memorable. But again, the role needs a bit more vivacity.

Ballard proves once again to be as versatile actor as Florida has, equally adept at comedy and drama. Here, he gets the chance to do both, hilariously uncomfortable meeting his girlfriend’s parents, all laughingly fumbling and bumbling (and all too recognizable for any of us who have met their intended’s father for the first time). But Ballard is perfect during Norman’s verbal torture when the nerdy Bill overcomes his discomfort pushes back and reveals the serious man of worth that Chelsea loves.

Also in the cast is Casey Butler as the quintessential disaffected teenager and Paul Tei (always a pleasure to see the Mad Cat director/producer/playwright acting again) is the goofy mailman with the silly laugh who was Chelsea’s first boyfriend and running buddy in their youth.

South Florida is blessed with a small cadre of superb creative designers who experienced national theatergoers would put up against any in the country. Dramaworks not only showcases those talents but demonstrates again its consistent level of quality from Brian O’Keefe’s lived-in costumes to Donald Edmund Thomas’ subtly changing lighting, to Brad Pawlak’s sound design that convincing layers in sounds of night chirping crickets and music wafting across the lake.

But the most obvious achievement is Bill Clarke’s creation of the lake house environment – a place in which the natural world co-exists with a rustic but homey place for humans to live. Huge timbers fly up to the roof, a flagstone fireplace with the date 1917 emblazoned on it reaches upwards and one transparent wall is anchored by tree trunks as if the two worlds have merged.

On Golden Pond  plays through Feb. 25  at Palm Beach Dramaworks, 201 Clematis St., West Palm Beach. Performances are 7:30 Wednesday-Thursday, 8 p.m. Friday-Saturday, 2 p.m. Wednesday, Saturday and Sunday. Regular individual tickets $75, student tickets $15, and Pay Your Age tickets are available for those 18-40. Tickets for educators are half price with proper ID. Call 561-514-4042 or visit palmbeachdramaworks.org.
To read a feature on the making of the production, click here.