Difference In Dramaworks’ ‘On Golden Pond’ Will Be Obvious 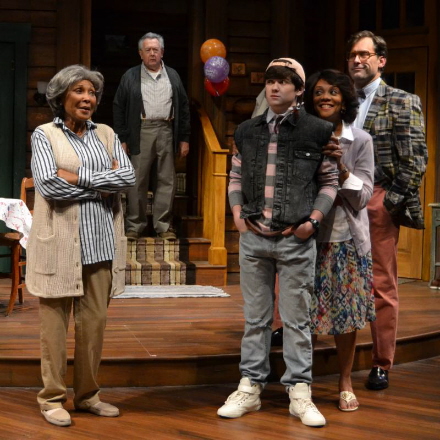 Audiences sitting down this weekend to see Palm Beach Dramaworks’ production of the venerable play On Golden Pond will get a visual shock. It’s intentional, but not quite as originally planned.

As usual, we will meet feisty golden agers Ethel and Norman Thayer bantering warmly at their summer house about family issues. Norman will be played by veteran Florida actor John Felix and Ethel will be played by sometime visitor to Dramaworks Pat Bowie.

If you have seen these performers before, you know the surprise. Felix is white and Bowie played the matriarch in Dramaworks’ A Raisin in the Sun.

In fact, later we will be introduced to their daughter played by the acclaimed African-American actress Karen Stephens; her boyfriend Billy will be played by Dramaworks’ stalwart Jim Ballard who, among other things, played the Irish boat owner in Dramaworks’ The Cripple of Inishmaan.

Just to put one more spin on it, the actor orginally hired to play Norman was black.
But he had a personal situation arise, and Felix, a reliable hand in the region, happened to be available.

But at no point will the multi-ethnic casting be alluded to in any way. The universality of the themes in Ernest Thompson’s 1979 play crosses all ethnicities and generations, and that underlay the thinking of Producing Artsitic Director William Hayes when he chose his season.

“The play doesn’t deal with race. It deals with people getting older, family dynamics, mother-daughter relationships, neglected children, families pasted into other families It’s a challenge to the audience: Can we not see color, can we not see ethnic backgrounds, but see the universality of it.”

It’s a frequent argument for the now widespread use of “color-blind casting” in which parts are not cast with the ethnicity that they have been traditionally or even as the specifics of the role might dictate. It has been commonplace when casting Shakespearean plays, more controversial in such works as an all-black Cat on a Hot Tin Roof.

Stephens, who won a Carbonell for her soldier in Zoetic Stage’s Fear Up Harsh and is Carbonell nominated this year for her modern day Mother Courage in Theatre Lab’s Motherland, is comfortable with it in this case.

“The way I’m looking at it is race is not a factor because I think the family dynamic is so powerful and universal that it makes the race question moot. Like say if we were a real family and John Felix was my father and Pat Bowie was my mother, I wouldn’t walk into the room and say oh, John Felix is white and Pat is black. It’s just normal.”

She acknowledges that the audience might have to make some effort in the classic theatrical trope of suspension of disbelief. “You can’t ignore your eyes. You come into the theater and you see Pat and John on stage and you say it’s a black woman and white man. But after a while it becomes irrelevant.”

Eventually, the issues that the characters are facing will resonate louder in their familiarity than any visual distraction of racial differences, she and Stancato said.

The play centers on the aging couple spending their 48th summer on the tranquil titular spot. But mortality is unverving the nearly 80-year-old Norman. Under his crusty and curmudgeonly exterior, his physical condition and more prominently mental acuity is dissolving. Their peace and quiet is upended when their grown but troubled daughter Chelsea arrives, reviving the flinty relationship she has with her parents. She is hoping to leave the 13-year-old son of her boyfriend with them while she goes to Europe with a boyfriend. Alone in the middle of nowhere, the teenager and Norman bond. When Chelsea returns now married to the boyfriend, the rocky relationship between Chelsea and Norman resurfaces, forcing the two to work at a reconciliation.

The play was relatively successful, although it went on to a stronger afterlife in regional theaters, even spawning a 2005 Broadway revival with James Earl Jones and Leslie Uggams. But much of its fame stems from a 1981 film version with Katharine Hepburn, Jane Fonda and Henry Fonda, who won an Oscar in his final film role.

The only other change is that Stancato has set the play in 1988 rather than the present so that cyber devices would not get in the way. “I didn’t want the (teenager) to have a Gameboy or Ipad that would inhibit the art of conversation, that would get in the way of his relating with Norman.” A crucial element of the play is how the youngest generation manages to make a connection with oldest generation.

Further, it’s set in 1988 rather the original 1978 because audiences’ can better accept a mixed race couple in that time period.

Stancato emphasized, “What Ernest Thompson delivered to us was a story that gives us three generations — you can have the Boomers, Gen-Xers and Millenials all get something different from the same play.”