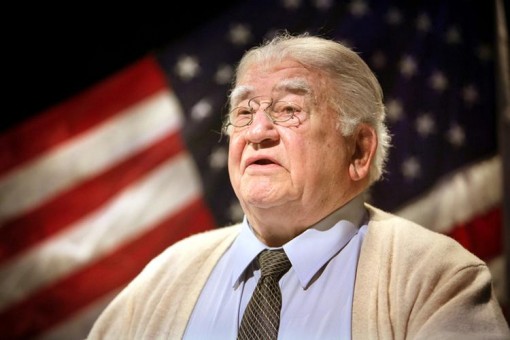 Ed Asner in "FDR," which will run June 1-5 at the Caldwell Theatre.

The Caldwell Theatre will host TV and film star Ed Asner when he brings the national tour of his one-man show’FDR to Florida for seven performances June 1-5.

The production depicts Franklin Delano Roosevelt looking back on his years as president from the Depression through World War II.

FDR is another effort by the Boca Raton company to bring in additional revenue and raise the theater’s local profile by booking shows produced by other companies. Since moving into its new theater in 2007, it has also hosted concerts, benefits and work by other companies such as Entr’acte Theatrix.

The play was written by Dore Schary, best known for his 1958 drama’Sunrise at Campobello which ends with FDR’s triumphant return to politics after being stricken with polio. This script was a later stage work turned into a 1982 television film with Robert Vaughn.

A publicity video can be seen at’www.youtube.com/watch?v=82jZUFCbcfs&feature=related