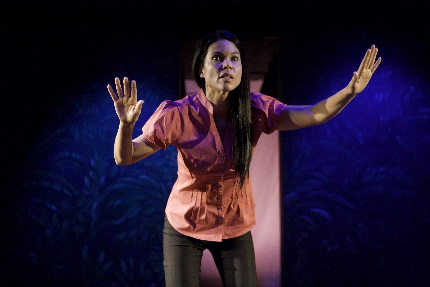 Here in South Florida, “the American Dream” has another meaning besides the materialistic middle-class fantasy of “a chicken in every pot and a Maserati in every garage.” With a population likely one, two or even no generations removed from immigrant status, this other concept of the American Dream is both grander and more basic than owning an Iphone 6.

Yes, Jamaica Farewell — Debra Ehrhardt’s semi-autobiographical comedy about her emigration to America – has passages of tension and tears, but it’s not exactly the oft-told heart-warming tale of a perilous life-threatening journey that graces the front page of The Miami Herald every two weeks.

The one-woman memoir playing at the Empire Stage in Fort Lauderdale is a gently funny chronicle of Ehrhardt’s perilous journey – perilous in that she entered the country smuggling one million dollars for her businessman boss trying to protect his fortune from the socio-political chaos that engulfed the island in the 1970s.

She grew up in Kingston dreaming of America as a land of opportunity. Once she turned 17, she tried repeatedly to get a visa, allegedly even dressing up as a nun. But when she met a CIA agent investigating drug and money trafficking on the island, she dreamed of using him to get through customs after her boss bought her a visa to conduct “some business” in Miami. And, then of course, she stayed.

She walks us through every single step of the journey including a horrifying detour through the Jamaican countryside where Murphy’s Law includes a not-so-funny sexual assault. How much of this is precisely true and how much is artistic license is probably the wrong question to ask, although she claims it’s 95 percent accurate.

The key is the tone. Her description of childhood poverty, of the violence of a fledgling revolution and of her harrowing escape is always told without a shred of self-pity. In fact, a wry knowing humor threads through nearly every moment and an unvarnished pragmatism strips saccharine romanticism out of her determined quest. It’s an attitude that initially elicits quiet chuckles and ends up being rewarded with unbridled guffaws. On the flip side, her borderline cartoonish and intentionally overwrought storytelling powered by inexhaustible energy is quite droll, but it also dilutes and distances the audience from the horrors which may or may not have been a wise choice.

Fortunately, Ehrhardt is a lifelong storyteller brimming with winning charm and a high-pitched musical accent that combines an island lilt with a shade of Irish cadence sanded down by a decade and a half in America. More important, this is the actress’ third play. She knows how to construct a story and pepper it with a bottomless supply of well-crafted quips that could only be written and persuasively performed by a survivor.

When she tells her devout mother that she has once again failed to get a visa because of financial instability, her mother says, “My treasure is in heaven.” To which the young Debbie Ann retorts, “Well, I don’t see any harm in asking heaven for a little advance.”

Late in the story, she rebuffs an attacker by setting him ablaze. Hours later when she finally lies down in the shelter of a brothel, she just stares at the ceiling. She says, “It’s hard counting sheep when every third one has his hair on fire.”

Only twice does the humor step aside for genuine emotion in scenes of her saying farewell to her parents. Her mother waves away her daughter’s second thoughts by saying that she must take advantage of the opportunity for a better life – in the name of her mother as well as herself. She also finds her alcoholic father in a stupor in a seedy bar and is unable to wrest from him a promise to stop drinking and gambling. She responds fondly with a disappointment blunted only from experience: “I was an expert at forgiving him.” But Ehrhardt always defuses pathos or terror by rarely letting more than a half-minute go by without a wisecrack.

Still, there are flashes of just how ingrained her dream was, growing up with a fervor that native-born Americans often lose. As the young Debbie Ann brushes her single long black braid, she playfully murmurs snatches of the “Star Spangled Banner” rather than some pop song.

Ehrhardt steps into the vocal and physical traits of about 20 characters in her Alice Through The Looking Glass odyssey. The roster encompasses a 90-year-old cab driver, a well-endowed whorehouse madam, a cross-eyed drunken rapist and a self-assured American spy. She does this with rum-smoothness, understandable since she’s done this show more than 500 times. The lithe and kinetic Ehrhardt is always in motion whether she’s racing around the tiny stage, or dancing or, to illustrate an invasive body search, bending over.

Under the humor and despite the refusal to mawkishly pull at the heartstrings, Jamaica Farewell is an off-beat reminder of what this country once told the world it was about and how it served as a dream so profound that people would do anything to simply get a shot at it.