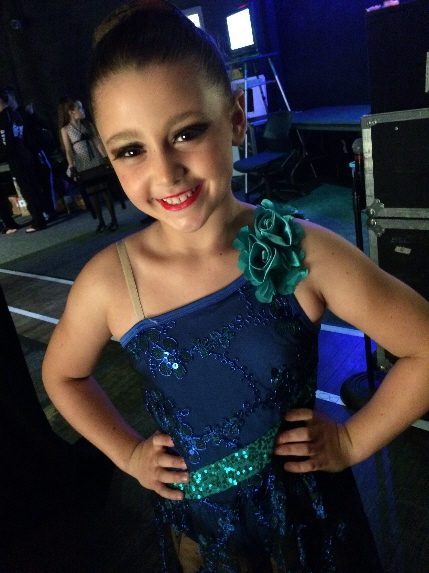 Issie Swickle at a dance competition

Issie Swickle. Remember that name. Not that you’d have trouble doing so. But remember when you first heard it, for bragging rights. Because you may be hearing it for a long time.

Issie is just a nine-year-old Davie girl with a taste for gymnastics who was once recognizable for long brunette hair and who until now attended Fox Trail Elementary School.

But charisma, a clarion voice, intense training and determination have won her the title role in the year-long national tour of Annie that will kick off Sept. 26 and come to the Broward Center Oct. 7.

“I love to do this,” she gushed during a telephone interview Thursday on her lunch break from rehearsals in New York City. “It’s like a kind of choice of staying home and having fun or so living my dream. Some people don’t have this chance. I’m very fortunate.”

Anyone doubting for a second that this is an option she embraces unreservedly needs only talk to her for a minute. “I know this is right for me. I love it and I won’t give it up until I get what my goal is. My goal is to become the best that I can be and get as many parts as I can.”

The steely words are softened with the modest voice of someone who believes she is the beneficiary of a gift – albeit one she has already worked very hard to develop – but also someone blessed with luck.

Others are less circumspect about her pure talent. “She lights up on stage; she’s a little baby diva. But she’s very humble at the same time,” said Michelle Ameerally, artistic director of Broadway Kids Studio in Davie, which has become Issie’s second home.

Laudatory adjectives pour out of those who have seen her on local stages. Stephanie Sacharow, whose daughter Katya worked with Issie in several Kids Studio shows, recalls, “She had the confidence and attitude from the time she was a little seven-year-old. She knew what she was doing, she was so assertive and confident.”

Her parents don’t know where it comes from. Her dad, Adam, is a family practice lawyer in Plantation whose only performing might occur in front of a judge. Dana was a model years ago and sang with a band back in her youth. But that’s it.

“I think she feels at home on stage, she feels most comfortable on stage,” Dana said Tuesday. “She just came out of rehearsal from act one and she had a smile that went from ear to ear.”

She seemed to enjoy singing and dancing from her earliest years when her father nicknamed Isabel “Issie.” But her interest exploded when Dana accidentally stumbled onto Broadway Kids Studio as a place to hold Issie’s fifth birthday party.

Until getting this part, Issie would be picked up by the Studio staff as soon as she got out of school at 2 p.m. Then she would work at the Studio until 7 or 8 p.m. Usually, she’d head back there on Saturdays and even some Sundays for rehearsals. After dinner, Dana made sure Issie did her regular school homework, using the classes as the carrot and stick. She was insatiable. When Dana tries to cut back her commitments, “she will cry like it’s a punishment.”

Sometimes Issie won a lead like the title character in the Kids Studio production of Capt. Louie (meant for a 13-year-old boy) and other times a secondary or ensemble player.

“But she has that kind of work ethic,” Ameerally said. “When she goes into rehearsal she’s not afraid to ask questions and be bold. She’s like a sponge.”

Issie’s parents seem as surprised as anyone that their daughter is so committed.

“She’s very, very motivated,” Adam said. “When she likes something, it’s hard to explain, she just has an inner passion for it. There’s just something about her that loves to sing, loves to dance, loves to act.”

That’s not uncommon among children that the Swickles see among Issie’s classmates at the Studio, but something else is evident. “They have talent and they have drive and they have a love, but my daughter, it’s pure innocence,” Adam said. She never balks. “It’s actually been the other way; it’s ‘Can I have more lessons?’ ”

Ameerally explained, “To her, this isn’t work. She wakes up, she wants to sing and wants to dance.”

For all that determination, people say she isn’t anything like that when she’s not working. “She’s just a regular kid,” Dana said. She doesn’t seek out opportunities to perform at gatherings; she had to be coaxed to perform at her grandmother’s birthday party.

Ameerally confirmed that. “Off stage she is very personable and charismatic, almost like a mini-Punky Brewster.”

Some people might wonder how much of this drive to succeed comes from Issie herself. Is she just trying to please her parents? Is this a Honey Boo Boo kind of scenario? Dana scotches that instantly because that fear certainly has occurred to her as well.

Adam agrees, “It’s so not because we pushed her.”

Supporting that contention is the considerable investment and sacrifice of time and money that the family has made. The parents have had to divide up the chaperoning duties, with Dana handling Issie, and Adam guiding their older son Max’s pursuits.

“It’s a 100 percent devotion to your child’s desires on a daily basis. It requires you to drive everywhere, to fly places.” Adam said. “It’s hard. It’s difficult. But that’s why you have children.”

Dana echoed that. “It’s been a huge commitment. I think we are very fortunate in my husband and my son have been very supportive even before this. We never had a family weekend. It was to taking Issie or going to see Issie.”

The family will live apart for a year other than holiday vacations and the Broward Center appearance. But the family speaks by phone virtually every night, sometimes using Skype. Also, Adam and Max plan to visit once a month wherever Dana and Issie are playing. On Thursday, Issie was jazzed at the prospect that Adam and Max were flying up that night for the long holiday weekend.

As her talent came clear, the Swickles gave Issie every opportunity possible. Last summer, she attended a workshop program in New York City called Broadway Artists Alliance attended by agents seeking clients. It, in fact, provided Issie an agent and introduced her to a new friend, Angelina Carballo of Miami.

The agent had Issie try out for the musical Matilda, which has many children’s parts. She didn’t make the cut, but she had no qualms when the Annie audition was announced.

Her parents flew with her to New York for a June 8 audition with a team led by director-lyricist Martin Charnin. Hundreds of girls sought a shot at being one of Annie’s crew let alone the moptop herself. Issie had played the tiny firebrand Molly in the stripped down Annie Jr. at Broadway Kids Studio and then again in the full production at Pembroke Pines Theater of the Performing Arts when she was seven. But some of her competitors had similar experiences.

The only comfort was Carballo was auditioning, too. Dana said she told Angelina’s mother, Mary, “I hope she makes past it first the round.” And later, “Oh, my goodness, I hope she makes it to the end of the day. If she does, she can walk out with dignity.”

In fact, Issie received a callback for June 14 with a group of about a half-dozen girls. “I told her, whatever happens from here I’m so proud of you.”

The selection was memorialized in a promotional video that can be seen by clicking here (starts at 5:10) 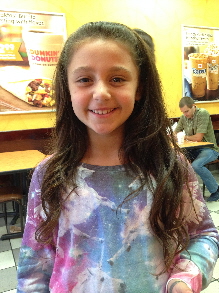 The Floridian stood out, Charnin wrote in an email this week, because “Issie is spunky, disciplined, intelligent, great to look at as a redhead, and wildly talented, especially for someone that young.”

But she isn’t cocky. Dana said, “It’s being the right place at the right time; it’s being lucky.”

What her friends who might envy her do not know, Issie says, is that once you get the part, the hard work is not done. It’s just beginning. Her routine since rehearsals began last week is intense. She gets up at 6 a.m. in a hotel across the street from the rehearsal hall. Six days a week, she goes to tutoring from 9 to 11 or noon, a break, then rehearses all afternoon until about 6 when she has another hour of school. 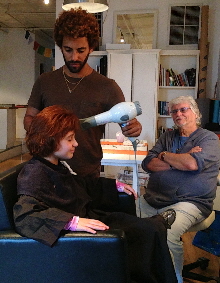 Everyone wondered if she would have trouble having her trademark long brown hair lopped off and dyed red. But Issie was pretty philosophical.

“I love my new haircut actually. I can do different things with it. I can curl it. It’s just hair. It’ll grow back,” she said Thursday. Her hair was donated to Locks of Love charity.

She’s not complaining per se, but this is a much tougher challenge than most people realize on a personal level, she said. 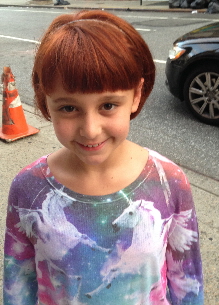 “Everybody treats me like an adult, like I’m 25 years old. I want to be kid. Because most kids play outside and they have all day every day (to play) and they have sleepovers. I’m not like that. I have to work every day.”

Still, she has made friends already with the other orphans in the cast and was grateful that her friend Angelina Carballo made the cast as well. (“She’s my bestie.”) But while the other kids are horsing around during their lunch hour, she’s spending a portion of it on the phone with a reporter.

Backstory
Issie is stepping into a 38-year tradition. The show is familiar from incalculable productions by regional, community and school theater companies, including one at the Maltz Jupiter Theatre last December. But this tour has been overhauled once again with a new creative team designing sound, lights, costumes and sets just for the tour.

Charnin also directed the original version that he co-wrote for the Goodspeed Opera House in Connecticut in 1976. He helmed the Broadway bow in 1977 that made a star out of Andrea McArdle who belted out the iconic “Tomorrow.”

It was revived on Broadway in 1997 with Charnin directing, and again in 2012 with Miamian Katie Finneran as Miss Hannigan and directed by James Lapine. It has been filmed twice and will resurface this Christmas in a new version set modern times with Jamie Foxx, Rose Byrne, Cameron Diaz, Bobby Cannavale and Quvenzhané Wallis (Beasts of the Southern Wild) as Annie. A trailer gives you an idea how completely and unrecognizably it has been rewritten. Click here.

That’s her plan — whether it’s being the star or a chorus member, although a lead part is fine with her.

“I don’t care where I am or what I’m performing. I just feel like when I’m on stage it’s fun for me and it’s what I want to do until my last breath.”

Annie runs October 7 -19 at the Broward Center for the Performing Arts as part of the Broadway Across America-Fort Lauderdale series, 201 SW Fifth Ave., Fort Lauderdale. For more information, call 954-462-0222 or visit BrowardCenter.org. 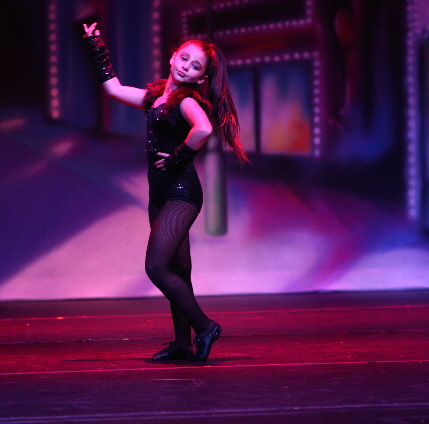