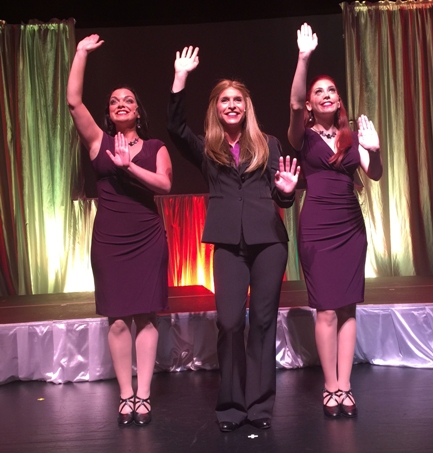 Boca Raton Theatre Guild’s Everyday Rapture is bliss and it’s the reason to get yourself to the Willow Theatre. Jodie Langel, Ann Marie Olson and Leah Sessa possess some of the best voices you’ll hear in South Florida musical theater circles and they bring top-drawer musicality, interpretation and renderings to the delivery of the 18 numbers in this one-woman (albeit four-person), cabaret-inspired show that ran off-Broadway in 2009 and opened on Broadway in 2010 and gets its Southeastern premiere here.

Yet no matter how hard they try to sell Everyday Rapture, Broadway star Sheri Rene Scott’s introspective piece about her arrival on the Great White Way from Topeka, Kansas, to the bright lights of Broadway never really hits a peak.

The biggest drawback of Rapture is that Scott hasn’t built in enough universal appeal to create interest in a story that’s performed by someone other than her. Langel does her best but Scott doesn’t give the audience much reason to have a stake in her musings about things such as learning life’s lessons from television’s Mister Rogers, finding four leaf clovers and growing up as half Mennonite (a running joke throughout that never really reaches the comic heights that Scott intends).

Scott is a darling in New York theater circles, known for her roles in Disney Broadway productions of Aida and Little Mermaid, and in the musical Dirty Rotten Scoundrels, a role for which she was nominated for a Tony Award. Surely Seth Rudetsky most likely considers it a coup when he can nab Scott for a sitdown on his Big Fat Broadway show on Sirius/XM. But for the mainstream audience, Scott’s Broadway competitor, Idina Menzel, is more of a household name.  (She actually references Menzel’s larger star status in the show.)

The idea starts off with promise as she tells the story of meeting a rabbi, or maybe he wasn’t a rabbi, but just a wise old Jew, or was he a wise old Muslim, or . . . who gave her two pieces of paper. One read, “I am a speck of dust,” while the other said, “the world is created for me.” It’s a great premise that could hit a universal nerve, yet as hard as Scott’s script tries, she’s never able to bridge the proverbial gap in her show. Frankly, in this incarnation, the message is that the world was created for “me.”

Langel has a big job in the almost two-hour production where she’s in every scene, only getting a small breather here and there. The most entertaining “breather” is a scene in the second act where Ms. Scott corresponds via the Internet with a fan she’s seen on You Tube mimicking her dance moves. For a short time — a very short time — Ben Solmor, a Florida-based choreographer who also was the choreographer for this show, grabs the spotlight. He amps up the comic effect in the number My Strongest Suit and gives the internet pen pal broadwayislove09@earthlink.net some smooth moves (he busted a move so much Sunday that his glasses flew clear across the stage).

But for the lion’s share of the show, Langel as Sherie is front and center. Langel has a difficult task as she tries to wrap herself around this “character” that Scott has created, which is a challenge — it’s more personal storytelling than anything else and is lacking in the depth that’s necessary to make it a piece of theater. But when Langel can push her energy into the vocals, the actress is especially captivating; she proves she knows her way around the styling of a song. When she has the back up of her Mennonettes (clearly a nod to Bette Midler’s Harlettes), Olsen and Sessa, there’s a musical beauty that’s unmatched. Too bad Scott didn’t give the Mennonettes more to do – perhaps if she had Olsen and Sessa as her original back up singers she would’ve written some solos in —you yearn to hear these two talents show off their vocal ranges and exhibit previously-seen acting chops. Yet, in this show there’s little for them to do other than shimmy, shake and provide some harmonies.

Scott’s premise is that she “lives her life inside a song” and luckily so because the songs are what gives Rapture its glimmer. The repertoire contains tunes made famous by her idol, Judy Garland: You Made Me Love You, Judy’s eyelash batting
ode to Clark Gable that Scott turns into a strange love letter to Jesus and Get Happy, which Scott sang as a 7-year-old to patients at a psychiatric clinic.
The 1969 Henry Nilsson song, I Guess the Lord Must Be In New York City is given a refreshing rendition as is the rousing finale Up the Ladder to the Roof.

Director Genie Croft embraces the cabaret aspects of the show, recreating the feel of a New York supper club, perhaps seeing it the way it was first imagined by Scott and her co-writer Dick Scanlan, original director Michael Mayer and composer next to normal’s Tom Kitt.

Caryl Fantel as musical director in the Theatre Guild’s production deserves a round of applause, too, for her work on the aspects of the music and the sound she gets from the onstage band – a little bit jazz, some electric, but all perfectly put together.

Rapture contains some beautiful musical moments, gifted from Scott and then beautifully wrapped in this production because of the talents both in front of and behind the scenes. Unfortunately, the speck of Scott’s self-important story is more illuminating to her than it is to an audience outside of her inner circle.

Everyday Rapture plays through Nov. 23 from the Boca Raton Theatre Guild presents at the Willow Theatre, 300 S. Military Trail, Boca Raton (in the heart of Sugar Sand Park, just south of Palmetto Park Road. Performances are 8 p.m Wednesday-Saturday, 2 p.m. Saturday- Sunday. Running time 1 hour  40 minute including one intermission. Tickets are $35 or $28 for groups of 10 or more. Tickets at 561-347-3948 or www.brtg.org.