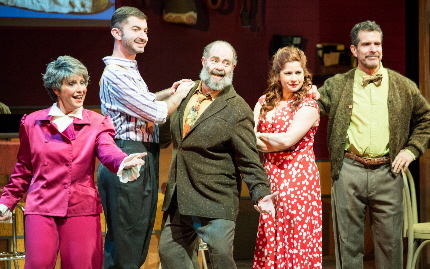 Stop me if you’ve heard this one before: So five Jews walk into a deli and crack wise for two hours with a non-stop stream of hit-and-run jokes, Mutt-and-Jeff vaudeville routines, stand-up monologues, double-entendres, single-entendres, Henny Youngman one-liners, hoary quickies, a little bit of music, a couple of reflective moments and an endless supply of classic humor punctuated with every Yiddish expression ever uttered in mainstream entertainment.

Old Jews Telling Jokes at Broward Stage Door is precisely what it wants to be and precisely what you think it will be. If it sounds mildly engaging, you will be delighted, for what they want to do, they do very well. The three busloads of condo commandos attending Wednesday’s matinee were rapturous. But if this isn’t your cup of kreplach, stay far away because you’ll feel this brand of humor is close to its past due date.

The ludicrous conceit is that someone starts to tell a joke, but the others act it out. So when characters in the narrative speak, it’s often other actors saying the dialogue and to a degree performing the scene – most of which last about 15 seconds.

This sounds ponderous and unworkable when written out here on the page, but this cast delivers this material with such unbridled abandon and joy, that it sort of works. So a tip of the yarmulke to the indefatigable Gail Byer, Ben Prayz, youngsters Adam Chisnall and Ashley Brooke. First among equals though is Michael H. Small who gladly immerses himself in this silliness, channeling Zero Mostel, Mel Brooks and a dozen other legends. With his luxuriant beard, balding pate, round eyes and Brooklyn-Bronx brogue, he seems born for the part.

Don’t misunderstand. The material itself curated by Peter Gethers and Daniel Okrent, based on an Internet series, is often awfully cheap laughs, eliciting groans and begging to be topped off with a rimshot.

Written out, a lot of the jokes seem barely funny. It’s the classic delivery with time-tested timing, usually embellished with a thick outer borough accent, that puts them over. Here’s a one-liner: “Why don’t Jewish mothers drink? (Wait for it) They don’t want to dull the pain.”

There are the classics like: “So a Hassidic Jew walks into a bar with a parrot on his shoulder. The bartender asks, “Where did you get him?’ The parrot answers, ‘In Brooklyn. There’s thousands of ‘em.’ ”

A few aren’t quite so sledgehammer silly. Deep in the show, a guy watches the three women sit on a bench. He delivers the set-up line: “So three Jewish mothers are sitting on a bench, minding their own business….” Then he waits a second. Then another second. Finally, the audience catches on that it wasn’t the set-up; that was the punchline.

One warning to Puritans, if there is such a thing as a puritanical Jew:  A lot of this material is daubed in various shades of blue — jokes involving schlongs, nudity and sex – even a funny one involving a world-class fart. As presenter Dee Bunn says, it’s not just the Catskills, but the midnight show in the Catskills.

Woman: My boyfriend wrote “I love you” on his penis. I said, “Stop trying to put words in my mouth.”

The show does slow for a couple of introspective monologues talking about the need for humor even in the darkest situations and how these water chestnuts provide a palatable ans valuable connection from early 20th century immigrants to their succeeding generations who’d rather assimilate than brandish their cultural identity.

There are a few musical numbers including Tom Lehrer’s “Hannukah in Santa Monica” and a good deal of snatches of songs wryly chosen and played by David Nagy.

To be honest, nearly two hours of groaners and silliness including an intermission can be a bit relentless, and some of the jokes aren’t as funny as others. But like the old TV show Laugh-In, if this joke falls flat, a funnier one follows close on its heels.

If anyone in this cast didn’t already know the timeless rhythms of comedy honed in vaudeville up through ’60s sketch comedy (pointedly avoided by Saturday Night Live), director Peter Loewy made sure that every bit was beat perfect and that the whole thing moves swiftly.

We’ve written often here about the Theater of Recognition, art that capitalizes on shared culture so heavily that simply saying the word Oy! or Loco! elicits laughs. This show doesn’t shy from that; it embraces it with steady references to kvelling, kvetching, schmiels and tuchus. So if you like your humor with a bit of mileage on it and marinated in borscht and chicken broth, this show was meant for you. Otherwise, well, Hedda Gabler is playing at the Miami Theater Center.