Harrowing Depiction Of Evil: An Evening With John Wayne Gacy 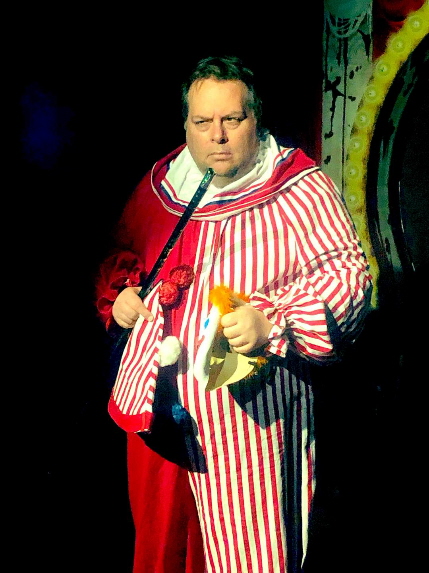 You may find this hard to believe, but An Evening With John Wayne Gacy Jr., — easily the most off-putting title for a theater piece in many years – is a surprisingly effective, harrowing and highly stylistic depiction of homicidal madness.

The power of Ronnie Larsen’s script in this Infinite Abyss production comes from seeing the serial killer from the inside of his mind, a man whose gymnastic thought processes are twisted beyond just sadistic yearnings. Inside a tiny theater space, it is far more dread-inducing than viewing such horrors from the safe distance of a TV documentary or hyped-up film.

Crucially, Gacy’s self-justifying ravings are balanced by extended arias from his devastated wife and mother, and especially by a shattering first-person recounting and recreation of one attack by a victim who escaped.

Beyond the words, this evening is propelled by Larsen’s bravura performance, two fine supporting performances and the deft theatrical vision of Abyss’ co-founder Erynn Dalton who molded the actors, script, sound and lights to produce an unnerving experience.

Let’s be clear right up front: This show isn’t for everyone, irrespective of their artistic discernment. With theatrically surreal portrayals of violence (although with no Grand Guignol gore), sexual perversity, and an unblinking portrait of the darkest depths the human mind can reach, the material is likely to repel some people to the point that they cannot meet it halfway. Indeed, many people simply aren’t going want to spend 75 minutes in this ring of hell. Many will simply turn off their emotional receptors, leaving them bored and incorrectly relegating this to cheap exploitation. But it’s their loss.

FYI for younger audiences: Gacy, along with Son of Sam and Ted Bundy, was the most notorious and heinous serial killer of the second half of the 20th Century. But his predilection for sadism, mixed with the rape and murder of at least 33 teenagers and young men in the 1970s in greater Chicago, catapulted him into a unique level in the pantheon of psychopaths. It would not be until the arrest of BTK a quarter-century later that the public would see his like again, although the commission of their sprees overlapped in time.

But this is theater, filled with visual and aural moments such as him ebulliently bursting into the room to circus music as he wears the full clown regalia and mask that Gacy wore to entertain at children’s hospitals. His peppy voice and grinning expressions may attempt to mirror Bozo, but his pained strained eyes betray the dark underneath.

Or the finale when his doughy potato-sack body is clothed only in skimpy underpants and the bedraggled ruffles around his neck of the clown costume collar.

The play is set in the hours before his 1994 execution, as Gacy regales his visitors. His retrospective is jammed to bursting with a labyrinth of rationalizations and protestations that nothing is fair – not his childhood, not his prosecution, not people’s perceptions of him. But the script makes no attempt to excuse or even raise a shred of compassion despite a description of a troubled childhood.  Instead, the script has counterpointing moments of consequences such as two actors in the audience intoning the names of his victims.

Dalton, the company’s cofounder and an old hand at staging horror theater both bloody and psychological, has enhanced Larsen’s script to produce memorable moments in the Foundry space at the Wilton Theater Factory. In the script, the actor playing Gacy also portrays his mother and other characters. Dalton wisely assigned that and other roles to other actors. As co-sound designer with Larsen, her background music can be a bucolic etude or, behind one upsetting scene, the tinkle of a music box. She can employ ominous black light to unhinge a scene of violence or grossly smear on clown makeup to illustrate an increasingly unmoored mind.

This becomes especially evident in his monologue for Gacy’s mother whose mind flails about trying to rationalize what her son has done and who decries the crowd outside the prison joyfully celebrating his execution. Similarly, working with Dalton’s inspired staging, Larsen’s words make you squirm as one survivor reenacts his protracted torment with inescapably excruciating detail where most writers fall back on verbal shortcuts like “torture,” “rape” and “ordeal.”

But give credit as well to actors Bridgett Haberecht and Khail Duggan (alternating with Richie Stone) who inhabit these difficult parts that intensify moment to moment, then spin around a moment later to portray everyone else from a prosecutor to the young Gacy.

All of this is backing into the stunning — a good word choice – performance by Larsen. With egoless courage he has climbed deep inside this monster to make us buy that Gacy almost believes his endless infinity of corkscrew justifications mixed with bravado and bottomless self-pity as he cites himself as “the 34th victim.” Words pour out of Larsen’s Gacy like foul effluent gushing uncontrolled from a fire hydrant. His anxiety increases as the evening wears on — not as much about execution so much as not being appreciated.

Imagine an actor trying to sell this passage as Gacy notes that in his recollection, his victims didn’t run away when confronted with his offer of sex. “But see the parents…don’t wanna believe that… they, they, they aren’t interested in the truth. I knew their sons in ways they never would and they’re jealous… that’s what this whole case is about… jealousy… I-I’ve been too successful, people, people resent it. But sex, sex is not murder.”

Or “If they execute me, they’re gonna have riots in this country like have never been seen before. Some people around here underestimate my popularity… I hope they do kill me. I’ll come back as a ghost and haunt every last one of ya! I’ll be like Jack the Ripper. I’ll be alive forever. Every time you see a clown you’ll think of me.”

Larsen lands both passages and many more with complete credibility. His unique high scratchy husky voice lands just the few crucial millimeters shy of whining which would sink the show. Frankly, his work was so fine Saturday night that I fear recommending it because it might not land as solidly every night.

Infinite Abyss is best known for its gleefully outré immersive horror shows akin to a Halloween haunted house, but it has always pursued psychological drama such as The Collector and Extremities.

Here, by inserting you directly into the nuts and bolts of the nightmare, it hammers home that there are real-life monsters in our midst far more terrifying than blood-dripping vampires and cinematic hockey-masked killers. 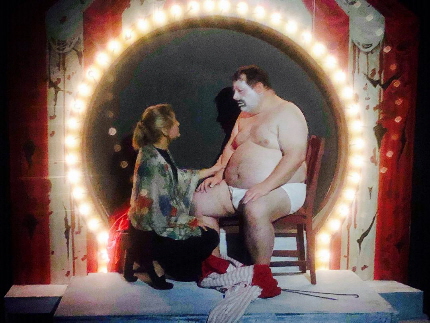