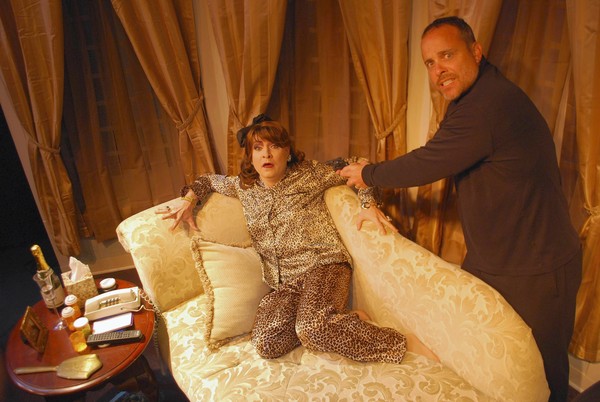 Brooks Braselman, left, and David R. Gordon in "He's Coming Up the Stairs."

It’s summer, and camp is in session at Empire Stage in Fort Lauderdale.’ The cozy theatre’s current production is He’s Coming Up the Stairs, a kitschy, cross-dressing, comic take-off on Sorry Wrong Number, a thriller about an invalid who overhears the planning of her own murder.

Tongues are firmly planted in cheeks for this riotous redux, in which the lead role of haranguing heiress Sally Winston is played in drag by actor Brooks Braselman, an actor who’ll do anything for a laugh.

The show is set in New York City, circa 1989.’ Demanding diva Sally is in her penthouse bedroom, wearing leopard print pajamas.’ Sally is ill, but even more ill-tempered.’ She berates her nurse for wearing white shoes after Labor Day and for not doing a better job accessorizing her uniform.’ She takes pleasure in firing the receptionists at her husband Jeff’s office (David R. Gordon) when they won’t put her call through to him.’ She recalls her younger days as a beauty pageant contestant, and belts out Cher’s Dark Lady, and Helen Reddy’s Delta Dawn.’ She recalls, through flashbacks, how she met Jeff and begged her rich Southern daddy to let her marry him.

Sally’s diatribes and the flashbacks make up the bulk of the show, which is more than halfway over before she overhears a phone call between two men planning her murder.

The element that makes He’s Coming Up the Stairs work is that the cast and director are all in the same zany arena.’ Every line is milked for maximum melodrama.’ Emily Shaffer is wonderful as Sally’s nurse and Jeff’s mistress, but she really shines as young Sally in the flashback scenes.’ Gordon is perfectly cast as the broad-shouldered hunk who married for money.

Garet Scott, who wrote the play, has a ball as Ivana Trump. Vance Barber is best as Sally’s daddy–with his cowboy hat and bad mustache he’s a ringer for Jake Gyllenhaal in Brokeback Mountain. Director Kevin Thomsen wisely keeps the pace brisk and the show short–an hour is just the right length for this level of hilarity.

But it all comes back to Braselman as Sally Winston.’ For the energetic Braselman, over-the-top is an understatement–he’s consistently out in the stratosphere–and his audacious performance is a comic tour de force.