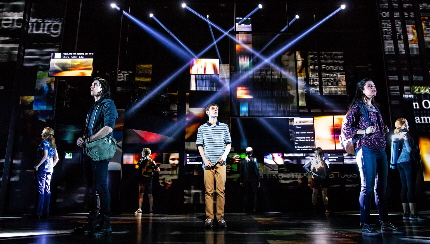 Anyone with the slightest knowledge of the recent theater scene knows that Dear Evan Hansen is one of the most universally embraced, moving and affecting musicals in years — a keystone in the newest Golden Age of Broadway built upon new works like Hamilton, The Band’s Visit, Fun Home and Come from Away.

But perhaps what these artists gifting us this superb national tour may not appreciate is the profundity of how some of its themes — feeling like an outsider, the coming together of a community, the connection and disconnection of human beings because of the Internet, death, suicide and tragedy — resound specifically in South Florida like the deafening battery of cannon fire.

A year after the Parkland tragedy and less than a week after two related teen suicides, the story on the stage of the Broward Center for the Performing Arts does not pluck heartstrings as it has for tens of thousands of fans; it rips them out.

But Dear Evan Hansen has landed intensely across the country, from teenagers who had never gone to theater to their grandparents struggling to take them. The reason is because everybody, everybody remembers the hell of high school, the fear that they will never fit in, never find themselves, never discover their self-worth.

This 2015 musical is still selling out in New York City, is still selling recordings in the seven-digit range, is still inspiring tribute videos and mail trucks of missives from fans because people feel someone has heard them and is voicing their anxiety and their pain, even if their experience occurred a half-century earlier.

For those who saw the work in New York with Tony winners Ben Platt as the protagonist and Miamian Rachel Bay Jones as his mother, rest assured. This often tear-stained touring troupe is thoroughly invested in the marrow of emotions now as it was when the tour began in September.

The premise is that Evan Hansen is an ultra-anxious 17-year-old high school senior overwhelmed by feelings of worthlessness because he is virtually invisible to his classmates, especially the junior Zoe whom he has a crush on. He spends most of his time on the Internet as a substitute for social interaction and as an escape from his failure to connect with people in person.

Upon the advice of a therapist, his mother has him write a letter to himself stressing a positive outlook, but the letter only reaffirms his loneliness and despair. The letter is snatched in school by the stoner misfit Connor. Later, the friendless drug-hazed Connor kills himself and the letter is misinterpreted by Connor’s family to be a suicide note he was writing to Evan.

Trying to comfort Connor’s family, Evan invents a totally fictional friendship with Connor, describing positive aspects that in fact were neither evident to the parents nor were true to begin with. Over the weeks, his supposed friendship with the troubled Connor brings him attention and even adoration from his classmates and the community, and Zoe who was Connor’s sister.

The stakes and complexity multiply, fueled by the Internet, newly-invented tweets between the two boys, and Evan starting a national campaign to help teens considering suicide. Evan’s stature and acclaim soar. He is seduced by the virtual adoption that Connor’s wealthy nuclear family is lavishing on him (in a vicarious substitute for Connor) while his divorced mother works nights as a nurse’s aide and is earning a degree to give them a future. The complications intensify until the situation reaches critical mass.

A brilliant facet whose irony deepens and deepens is that as the family is comforted, as Evan’s life improves, as an entire community comes together in an expression of compassion and concern, as some of the finer aspects of human nature emerge — it is all born of a lie and a compounding of self-serving lies that Evan could but won’t stop.

The show’s score was penned by Benj Pasek and Justin Paul (who also wrote the musical version of A Christmas Story, believe it or not) who were mentored by original producer Stacey Mindich. She brought on book writer Steven Levenson and director Michael Grief (Rent, Spring Awakening, Next To Normal). The orchestrations, additional arrangements and musical supervision are by Miami-bred Alex Lacamoire (Hamilton).

They have depicted the underlying truths with such painful accuracy that the audience is won over almost instantly. The music ranges from quiet introspective pop to soaring anthems. The lyrics are heartfelt and earnest. But the unsung quality is subtle insightful moments created by all four of the above artists and perfectly brought to three dimensions by this cast.

For instance, in the song “Requiem,” Connor’s parents are grieving in their own way in their own arias. But in the same number, actress Maggie McKenna captures Zoe’s musicalized agony in being unable to muster the socially-required grief for a brother she never connected with. Later, Aaron Lazar as Connor’s father tries to bond with Evan in an indirect song in which he gives Evan parental advice about doing things the right but difficult way, hidden in a lesson about how to properly break in a baseball glove – advice Connor never stood still to hear.

While Jessica Phillips as Evan’s mother and Christiane Noll as Connor’s mother have dynamite musical moments, the actresses deliver heartfelt characterizations of adults achingly struggling to be good parents to troubled children.

Of course, the linchpin is the performance of Ben Levi Ross who simply exudes Evan’s social, physical and emotional awkwardness as a congenital apologizer. His anxiety-infused speech often rattles on at a breakneck pace. While he can be a little hard to hear when he sings quietly, his voice soars in other numbers. Ross charts Evan’s evolution with such skill and subtlety that you don’t realize the changes have happened until they become evident a scene or two later. During the first act closer, Evan’s speech to kick off the suicide project and the glowing anthem as the community bonds, “You Will Be Found,” Ross/Evan’s face glows in sunshine of social acceptance and the discovery of a sense of purpose.

Amazingly, this company does two shows on Saturdays, Wednesdays and Sunday, so Evan is played at matinees by Stephen Christopher Anthony, a New World and FSU grad.

The environment of an online dominated world created by designers David Korins, Peter Nigrini, Japhy Weideman and Nevin Steinberg is note perfect including towers of projection screens covered with an incessant parade of tweets, Facebook posts and videos and later with slightly blurry images of Evan’s emails and photos of characters.

Youth angst and a feeling of being an outsider are nothing new as elements or even the central themes of theatrical pieces, from Hamlet to Hair to Rent to Spring Awakening to Next To Normal to the current hit Be More Chill, and, yes, even Hamilton. But few capture these wrenching issues with the depth, tenderness and compassion as Dear Evan Hansen.

Dear Evan Hansen from Broadway Across America plays through April 7 at the Broward Center for the Performing Arts, 201 SW Fifth Avenue, Fort Lauderdale, as part of the Broadway Across America series. Performances are 8 p.m. Tuesdays-Saturdays, 2 p.m. Saturdays and Wednesdays, 1 and 6:30 p.m. Sundays. Runs 2 ¾ hours including one intermission. In addition to the standard tickets, are resale tickets available on the Broward Center website. For tickets visit www.browardcenter.org; by phone 954-462-0222.

Due to a power outage on opening night, the first performance was unable to go on as scheduled. A performance has been added for Sunday, April 7, at 6:30 p.m. for audience members displaced by the cancelled performance. For more information, click here.

This entry was posted in Performances, Reviews and tagged Broadway Across America, Broward Center for the Performing Arts, Jessica Phillips, Maggie McKenna. Bookmark the permalink.