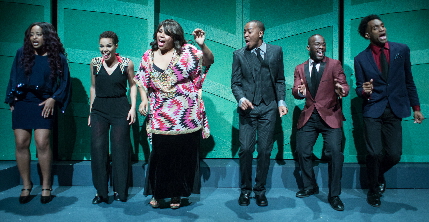 Greying Boomers may instinctively resist that the music of their lives is being repackaged into stage revues with little or no story the way Irving Berlin and Johnny Mercer’s songbooks have been for the past two decades. But when it’s done with as much skill and verve as Broward Stage Door’s The Soul of Motor City: Rhythm & Blues: The Motor City Sound, it’s hard not to get swept up.

This revue of Detroit-centric music from the early 1960s through 1980s is a kick-out-the-jams tribute executed by a talented sextet and deftly created by director-choreographer Kevin Black and musical director Ben Bagby. While the raw ragged quality you felt originally may not be there (“War” seems more of a production number than a genuine protest song), this effort invests considerable feeling and thought that adds a slightly different dimension to these standards.

With about 40 numbers, this jukebox encompasses nearly every monster crossover hit from “Respect” to “Endless Love,” and “Mercy, Mercy Me” to “Ain’t Too Proud To Beg.” As in Black’s previous revues at Stage Door, the program gathers the numbers in thematic groups like “Aretha: Queen of Soul” and “Hitsville Live” with medleys of numbers made famous by the Jackson 5 and the Supremes.

Black makes no bones that this is basically a greatest hits concert, a stage version of the cruise ship shows he spent many years developing. You might yearn for a little connective material.

But his strength is requiring singers to invest genuine emotion in these songs. They seem to have invented back stories for each number so that they are telling stories, not recreating classic numbers out of context. For instance, it’s three siblings comparing notes when Jar’Davion Brown, Elijah Word and Mimi J. (Jimenez) let bemoan “Papa Was a Rolling Stone.”

As the performers execute Black’s period choreography, songs slide into each other seamlessly, sometimes so quickly that the audience doesn’t get the chance to applaud.

We have criticized Stage Door a few times in prior revues for having primarily white bread ensembles trying to capture the Motown sound. This time, not only is the entire group African American, but as solid a corps of performers as you could ask for also including Gabrielle Graham and the luminous Alexandria Lugo of Aida, Jekyll & Hyde and who recently moved over from the adjacent theater where Putting It Together is closing its run this weekend.

They all may be a generation too young to remember these tunes coming out of the AM radio. But that works in their favor because they treat these numbers as fresh material rather than trying to resurrect someone’s memories. Most of the songs sound similar enough to the originals to satisfy those simply wanting a shot of nostalgia, but, wisely, no one is trying to do imitations of Aretha, Stevie, Marvin and Tammi, Lionel, the Tops or the Temps. They have their own phrasing, their own delivery.

All of the performers are skilled singers, although there are times that the proper notes, even intentionally bent ones, get lost in a muddle, but that ought to work itself out soon.

Black and Bagby have pressed the singers to enunciate clearly enough that you may discover lyrics you didn’t know existed. The craft of the songs’ lyric writers – usually lost in the driving rhythms – gets a well-deserved spotlight.

Another hallmark of Black’s Stage Door revues, often done with Michael Leeds, is that songs often are arranged slightly differently than the originals. In some cases, they have been turned into a cappella numbers or all six people switch off the lead while the others entwine harmonies never applied to these songs previously.

Or just the tempo is different. For instance, “I Heard It Through The Grapevine” is sung by Joshua Graham as a slow, poignant lament. Other times, arrangements faithfully hew to the original sound as if Holland, Dozier and Holland had returned for the gig. Occasionally, in the desire to give each performer solos, you long to hear the other singers provide answering echoing backup oohs and aahs.

But there are a score of memorable moments such as Lugo’s scorching “Who’s Loving You,” her own take on “Natural Woman” and her chemistry-infused duets such as “You’re All I Need To Get By” with Joshua Graham.

Tall, lithe and kinetic with a voice that can scrape the top of the register, Word sets the stage burning with his show opening “Living For The City” or the Commodores’ “Three Times A Lady.” Or savor Mimi J.’s “Think.” Or…  well, everyone gets their moment in the spotlight and delivers like Fed Ex.

The lush music is digital, which gives it a fuller more complex sound than a tiny combo could deliver, but it still feels just a shade tamped down, putting a slight damper on the energy levels in some numbers.

But this is a rewarding stroll down to Hitsville and devotees won’t be disappointed.