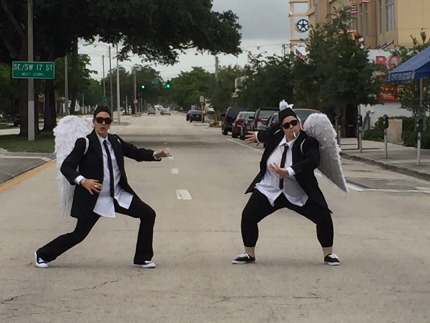 It’s likely that the Vanguard staff meant no self-aggrandizing praise in posting large photos of Lucy and Ethel, Carol and Vicki, Gilda and Jane, Tina and Amy across their set for the hilarious evening of sketch comedy, Parallel Lives. But it’s absolutely apt.

Because Elena Maria Garcia gets the rare opportunity once again to prove that she may well be the finest comic actress to grace South Florida stages over the past two decades. And it doesn’t hurt that partner in crime Casey Dressler is on the fast-track in the same category.

You don’t see Garcia often: She’s a busy working educator and she can no more seamlessly slip into an ensemble play than Robin Williams.

But her every appearance, three of them winning Carbonell Awards,  is a treat of impossibly varied physical comedy but also an ability to sink herself so credibly into a wide array of otherwise cartoonish characters that you buy into them. Dressler is not as over-the-top as her colleague, but she, too, brings an actress’ skill at suspending your disbelief about the most ridiculous parade of creatures.

Aiding immeasurably is the ingenuity of director Nicole Stodard, co-founder of the Vanguard Sanctuary for the Arts space, which is also the home to Thinking Cap Theatre. The combined efforts of this trio produce something so fresh that we could not recall any of it other than the opening skit from when Garcia did the piece in 1999 at Hollywood Playhouse.

Parallel Lives is a series of sketches written in the late 19080s and early 1990s by performing partners Mo Gaffney (a television veteran) and Kathy Najimy (who went from television roles to films). Their work in The Kathy and Mo Show in the 1980s eventually played off Broadway and won Obie Awards. The sketches have funny lines, but the humor is mostly character-driven and the effect is more theater than stand-up.

The premises are droll and seasoned with a feminist and gay sensibility. Several skits persist a bit too long, especially one in which an impossibly drunken drugstore cowboy hits on a regular barfly in a goat-roper bar. But every single bit works thanks to Stodard, Dressler and the endlessly inventive and vibrant Garcia.

The evening is bookended by an appearance of two Supreme Beings dressed as The Blues Brothers with wings who are designing human being at the cusp of the imminent Creation.

They fret whether white people will feel inferior because other races have such lovely skin colors. They mischievously invent pregnancy with ever increasing improbabilities such as the idea that the baby should gestate inside the woman for months and then emerge through, get this, a tiny hole. Later, they reward men with outsized egos as compensation for not being able to give birth.

In one of the evening’s high points, they impersonate never-say-die seniors blithely exploring pop culture by enrolling in college extension courses such as Women in Terrorism. The irrepressibly chatty duo are innocents abroad on a field trip with a Women’s Studies class to a New Age café where they have trouble negotiating a menu of dishes they’ve never even conceived of. The otherwise witty skit ends with Dressler’s matron telling a poignant story about how she discovers her nephew is gay and illustrating her pure-hearted instant acceptance because his new found love clearly makes him happy.

But moments later, the actresses transform themselves into rubber-limbed, stolid cafe performers unfolding an acrobatic exhibition of their newest work, “Woman, Sister, Woman.” It features some of the silliest self-absorbed, self-important free verse heard since the days of Beat Generation coffeehouses.

But the tour de force is Garcia’s fluid pantomime of a woman getting out of bed and performing her masochistic bathroom ritual of getting ready to face the day — all perfectly choreographed to a rousing salsa number playing on the radio. Arguably, no one in the region is as good at this as Garcia whose facial expressions, nimble limbs, precise timing and pure comic imagination are in the Lucille Ball-Carol Burnett category.

The accomplishment here, though, is how both women morph with the addition of wigs and a few costume pieces from giggling sisters misbehaving after escaping the middle of Sunday Mass to a couple of outer-borough Italian teens mooning over the film West Side Story.

Little of this is sophisticated or subtle. In one bit, the women are playing out some faux Shakespearean scene with ponderous declamations while physically augmented with huge, and we mean huge, breasts complete with nipples poking through the material. When the actresses have to portray men in the scene, well, we won’t spoil what happens.

Some passages land better than others, some meander longer than necessary. It takes special talents to make this keep audiences enchanted. But there’s no doubt
that Vanguard’s new comedy series has found just the pair.

And you know that thing, “I’d be willing to hear so-and-so read the phone book?” Well, it’d be worth giving the Yellow Pages to Garcia to perform.

Note: Parallel Lives continues The Vanguard’s 2016 Season of Comedy, a new brand of programming that will focus not just on comedy, but also, in the future, on works that explore popular culture and cultural icons.  The lineup will culminate Dec. 1 – 12 with Mixed Nuts, original, short comedies by regional writers,

Parallel Lives runs through July 3 at The Vanguard Sanctuary for the Arts, 1501 S. Andrews Ave., Fort Lauderdale, on the west side of the street across from Broward Health Center. Performances 8 p.m. Thursday-Saturday, 5 p.m. Sunday. Runs 1 hour 45 minutes with one intermission. Tickets $35. Visit www.vanguardarts.org, thinkingcaptheatre.com or by phone at (813) 220-1546.