The Phantom Rises Again In Retooled Edition, Still Lush And Lovely If Missing Something 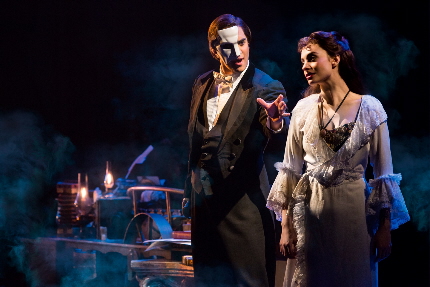 For all the derision and adoration that the basic material has engendered over 28 years, the thoroughly-retooled The Phantom of the Opera gliding over a fog-shrouded lake into the Broward Center remains a sturdy craft buoyed by a soaring muscular score delivered by a talented crew.

Those who have seen the show before – this is its fifth visit of a national tour just to the Broward Center — will rightfully tick off what is and isn’t still there in director Laurence Connor’s overhaul designed to simplify the logistics of moving the juggernaut between cities for short runs.

The chandelier is still there (and its speedier fall is scarier), but the candelabras rising from the fog are missing along with the grand staircase with its dummies for the ballroom scene.

The scenery is markedly different but no less grand, the choreography has been inventively expanded; the atmospheric lighting is superb; the acting seems better than in recent visits; the overall direction is strong with some asterisks and it has been many years since we’ve heard the orchestra envelop the audience with such rapturously swelling and soaring sound. The only holdover element besides the orchestrations is the late Maria Bjornson’s costumes that no one could improve upon.

As a result, the production exudes a freshness that will surprise season ticket holders reluctant to see the show one more time. Imagine that a different production company took on the bare bones script. It’s the same property featuring most of the now iconic elements, but with a different take – albeit not a terribly different one. Connor and producer Cameron Mackintosh did precisely the same thing for the Les Misérables reboot that toured through here a year before going to Broadway.

All that said, the first rule of a professional magician is never perform the same trick twice for the same audience. So, as fine as the production is and as admirable as the cast may be, some of the magic has disappeared in the return. For instance, even though Christine and The Phantom are more physical here – he actually touches her a few times – the latent sexiness is AWOL. Because Macintosh has cast a young hunky Phantom (as they did in the 2004 film), the daddy issues that added a bit of frisson are also missing. In fact, returning audiences will feel something ineffable is missing this round.

For anyone who saw Michael Crawford’s Phantom or even heard him on the recording, Cooper Grodin attracts most of the disappointment in this regard. Grodin has a fine expressive voice, comfortably hitting everything from the subterranean low notes to the near falsetto. He competently delivers “The Music of the Night” and really nails “The Point of No Return,” which drags in other productions. His acting, which seems a bit one-dimensional for the first two-thirds of the show, finally blossoms in the final third to justify why he was hired. But there’s not a lot of sexiness, not much evidence of a tortured soul, nor much mercurial menace. By completely unfair contrast, the inimitable Crawford in the heaven-sent role of his lengthy and varied career brought all of that, wrapped in an off-beat characterization and carried through the weaker parts of the show by his God-given charisma.

No such problems exist for Julia Udine whose gamin-like Christine not only has the requisite crystalline voice but whose acting chops chart the ingénue’s evolution from a scared little waif to a more self-assured woman. Much of that is evident during her rendition of “Wishing You Were Somehow Here Again,” which in other hands feels like a whiny number, but here is a dramatically justifiable and affecting piece as Christine’s innocence finally evaporates.

Praise too is due Ben Jacoby in the eternally thankless role as the cartoon hero Raoul. Jacoby also manages to find some depth in this underwritten role pulled straight from a melodrama. His work on “All I Ask Of You” brings some honest romantic ardor to what can be a saccharine number.

The outgoing cast that has been together a year is uniformly strong, including Jacquelynn Fontaine’s diva Carlotta and Brad Oscar as Fermin. Oscar who was the original Franz Liebkind in The Producers also headlined the Barnum that played at the Maltz Jupiter Theatre a few seasons back.

The last word or note belongs to the orchestra, a combination of five travelling musicians under the baton of Richard Carsey, plus 10 locals. Perhaps it’s that three of the slots are electronic keyboards that can imitate any other instruments, but the rich confident sound signals once again that this is no gimcrack bus-and-truck tour.

Connor’s version, overseen by Mackintosh and choreographer Matthew Bourne, toured England in 2012; this edition has toured the United States with much of this cast for a year. As a result, a significant number of cast changes occur next week in the middle of its Fort Lauderdale run. Among those making their grand entrance will be The Voice contestant Chris Mann in his theatrical national tour debut as The Phantom, Katie Travis as Christine Daaé and Storm Lineberger as Raoul.

This renovated version is the fourth separate national tour and it marks the property’s fifth visit to the Broward Center where it inaugurated the building in 1991.

The company claims Phantom became last summer the first stage production to reach worldwide grosses of $6 billion – more than twice the world’s highest-grossing film Avatar thanks to more than 65,000 performances and 140 million tickets to patrons in 30 countries and 151 cities in 14 languages. Obviously, theater is definitely a dead-end financial venture.

This is still Phantom for good or ill. It still has Andrew Lloyd Webber’s score intact (which divides people), Charles Hart’s debatable lyrics, and the still murky flawed script by Webber and Richard Stilgoe which lets crucial information zip by so quickly (like Christine’s father or that the lovers escape to the roof of the opera house) that newcomers often get lost.

But here’s a fair question: If this production with all of these players on- and off- stage was to open on Broadway as an unknown property in 2014, would it turn into the monster hit it has become? At this point, if you have seen the original multiple times, it’s impossible to know. Bring a Phantom newbie and ask them.