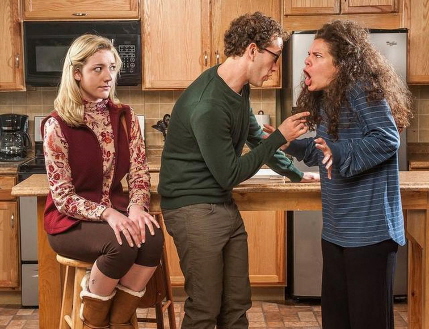 As if it was even needed, molten lava in the guise of scalding verbal acrimony ravages the apartment where incendiary family strife already was poised to detonate into devastation in GableStage’s uproarious and upsetting Bad Jews.

Poisonous passion imbues this 21st Century examination of the century-old issue of assimilation — a mercilessly funny and bracingly savage jeremiad couched in the embrace or avoidance of Jewish religion, traditions and culture. But it poses hard questions for any immigrant population whose forebears arrived after the Mayflower or the Mariel boatlift.

Director Joseph Adler at his best, a superb cast of 20-somethings and the insightful playwright Joshua Harmon have crafted an alloy of intellectual ideas and excoriating emotions to open GableStage’s 17th season.

Two brothers and their cousin are temporarily housed together for their grandfather’s shiva. Brother Liam has brought along his sweet-natured shiksa girlfriend, Melody.

Cousin Daphna seeks the support of the easy-going other brother, Jonah, before an impending argument over who inherits their grandfather’s iconic gold Chai charm that he hid under his tongue for two years in a concentration camp.

The intense, voluble and volatile Daphna, born Diana, has embraced her Jewishness with a fanatical ardor; she plans to go to Israel in preparation to become a rabbi. Conversely, Liam has cast off any connection to his family’s faith. But Daphna does not know that Liam wants to use the Chai to propose to Melody just as his grandfather had done to his beloved in lieu of a ring. The Chai (the Hebrew word for life) symbolizes for Liam their family’s personal history, and for Daphna, resonances of 6,000 years of faith and survival — not to mention a trophy in their ongoing feud.

Melody, trying to be a peacemaker, says, “I really don’t see why any of it matters, you know? Where people come from? People are just people.” Her gentle blitheness enrages Daphna who retorts, “It doesn’t matter for you; you aren’t Jewish” and later “If I stop, if we all stop, it will be gone. And you can’t get it back. Once it’s gone, it’s gone.”

Even without this issue, Daphna and Liam have always been at each other’s throats over their antithetical approaches to their heritage. This is familiar material thematically in plays about inter-generational conflict, but it has a freshness here because all of the participants are of the same under-30 generation.

Armed with sharp intellects and even sharper tongues, Daphna and Liam are gunpowder and a match. Clearly, from the first, devastation is inevitable, but the exact size, breadth, complexity and depth of the explosion is breathtaking.

These are hyper-intelligent hyper-articulate people whose metabolisms are running a few hundred rpms faster than ours. If the acerbic characters seem a bit over-the-top, chalk it up to legitimate theatrical license or, better yet, rest assured that many audience members will recognize relatives only a few notches more palatable.

Instead, honor that Adler and the actors playing the primary combatants, Natalia Coego and David Rosenberg, invest peaks and valleys in this 95-minute cage fight of long rants. Acknowledge also that all four actors and Harmon ensure that none of the characters, vicious or compliant, are as one-dimensional or even two-dimensional as they might seem. Audience sympathies shift among the quartet as illuminating information is doled out or human qualities are revealed piece by piece.

This occurs, in part, because Harmon exposes the hypocrisy and conveniently fungible thinking behind each character’s stand. Liam notes that Daphna cherry-picks what she wants from the Bible, ignoring its anti-feminist passages.

Liam screeds, “I know she wishes she were this, like, barbed-wire-hopping, Uzi-toting Israeli warlock superhero — Daphna — but actually, Diana Feygenbaum grew up in Schnecksville, Pennsylvania, in an armpit town doing swim team badly and hysterically sobbing when she didn’t get picked to be cheerleader. . . . She’s as Israeli as Martin van f***ing Buren.’’ Did we mention the play is riddled with obscenities?

She jibes to Melody, words to the effect that the only thing Japanese in his background is that “his mother makes you take your shoes off when you come into her house.”

Throughout, this is a well-wrought comedy of character, one that echoes but surpasses other slugfests that cross civilized boundaries like God of Carnage in which the audience finds itself chortling at chaos.

In a private conversation, Daphna is dissing Liam to Melody, who she also has been not too subtly jabbing to her face. But she brays that the now atheistic Liam was given a Hebrew name at birth: the ultimate ethnic moniker Shlomo. “Put that in your back pocket” to use in a future debate, Daphna gleefully advises Melody.

Adler is a master of pacing, driving one moment, letting matters breathe a bit the next. This is crucial to keep this from seeming like one long spew of bile. He and Harmon insert one welcome scene when the three cousins remember a hapless family visit to Benihana’s that left everyone in gastric distress incident. Amid gales of laughter, the memory temporarily bonds them once again as a family.

Nothing that Coego has done locally prepares you for her brilliant work creating this blazing comet with a fiery tail burning down everything in its wake. Other actors can tell you how difficult it is to maintain that energy, variety and counter-intuitive likeability of someone running full tilt most of the night pricking, demeaning and injuring people. She keeps Daphna from being irredeemably obnoxious by revealing the agonized angst inside that is driving her. Coego’s Daphna is so clearly a slave to long-incubated rage.

Coego’s achievement is matched by Rosenberg whose Liam is just as tightly-wound and caustic. As someone who is rejecting traditional values, he still manages to keep Liam from alienating the audience as we come to understand his motivations and values.

Lexi Langs, last seen locally in Mosaic Theatre’s The Edge of Our Bodies, keeps Melody from being a lackluster object worthy of derision. In fact, while far simpler than anyone around her, Langs exudes Melody’s simple decency and compassion faced with this toxic tornado.

Mark Della Ventura has the least number of lines as Jonah, but he is absolutely just as effective playing the gentle soul who seemingly is a slacker disconnected from everything, nursing his own private thoughts and stubbornly trying to stay out of this internecine fray he has been watching for many years.

For all the rollicking humor and scorching attacks, Bad Jews has a message about differing ways the upcoming generation pays homage to its past. Coming on the heels of its superb Mothers And Sons, GableStage has once again delivered a don’t miss production.