To Go Or Not To Go: House Theatre’s The Hammer Trinity 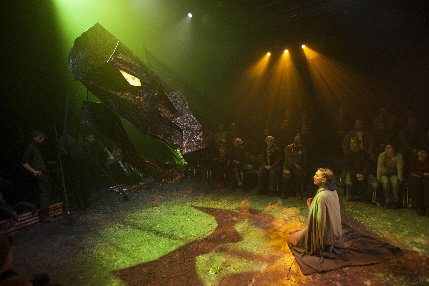 The question that patrons and colleagues have kept asking critics with trepidation during the past week or so is whether they should invest more than 9 3/4 hours and $150 for each ticket to see the House Theatre of Chicago’s epic three-play production comprising The Hammer Trinity as part of the Arsht Center’s Theater Up Close series.

The answer is not “absolutely” or a “good grief, no” but an unequivocal “it depends.”

It depends on, among other factors, your receptivity to three key elements which are often at war with each other:

–whether you are deeply into the 21st Century’s exploding craving for fantasy in graphic novels, television series, movie franchises and the like,
— whether you are a fan of the House Theatre’s highly theatrical and stylistic but minimalist approach requiring the audience’s active investment of their imagination (which runs counter to the instincts of people accustomed to hyper-realistic $250 million movies),
— and whether you are intrigued by an insightful contemplation of ineffective populist freedom versus effective autocratic leadership (an inquiry that  conflicts with audience members seeking a purely comic book geek experience).

The Hammer Trinity is all of the above and more, jammed into one carefully-constructed, precisely-executed equivalent of binge watching an epic adventure. It bogs down a bit in the second-to-last hour, but ends in a rousing final act complete with two 18-foot dragons besieged by tiny models of World War I fighter planes ala King Kong.

Bottom line: It is definitely not for everyone, even though the aim is to attract new younger, diverse audiences while hanging on to patrons who prefer Tom Stoppard. But in trying to satisfy everyone, the Trinity might leave less generous viewers fidgeting at the parts they are less enamored with.

Initially, the Arsht and House leaders would only allow patrons to watch all three at once during its eight-week run with performances on Saturdays and Sundays. Reacting to feedback, the Arsht has changed its mind and will now offer the opportunity to see each episode individually for $55 a pop on the weekends. But in fact, if you are going to attend, it really is an epic experience that should be seen at one time; each piece builds on and flows seamlessly into the next. Breaking it up would undermine the narrative surge.

So what is it? Structurally, the project is three plays presented in order on a single weekend day with an intermission every 65 minutes or so and with each play separated by an hour-long intermission including a dinner break between the second and third plays. You can bring your own food, but snacks and meals are sold on the premises. You can schmooze with the actors during breaks.

The Arsht’s Carnival Studio Theatre black box space usually occupied by Zoetic Stage has been turned into a long aisle-like playing space. Risers flank both sides and the whole thing is encased with horizontal poles like a cage to create its own world. 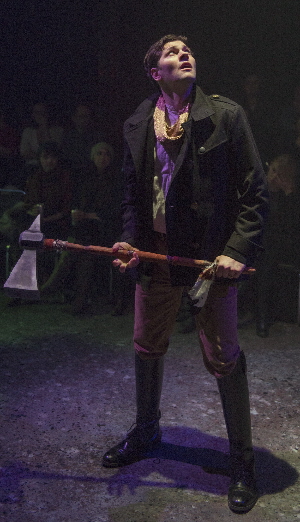 The plays – intentionally echoing the Arthurian saga through the dissolution of Camelot — trace how a young man comes to the kingship of a parallel universe that mashes up dozens of recognizable cultures from our world. But his ascendancy with the retrieval of the Hammer of power is only the beginning as he tries to unite irreconcilable factions of warring cultures and political philosophies.  The play is awash in heroes and villains, battles, monsters, magic, murder, romance, action, adventure, conspiracies, sacrifice, chess metaphors, the whole gamut of Joseph Campbell, , Star Wars, Tolkien and Marvel comic books. In fact, a free comic book lays out the prologue to the plot, although it is dramatized at the beginning of each of three plays.

The style, directed by co-founder Nathan Allen, is classic House with combats in slow motion, sea battles indicated by actors maneuvering model pirate ships, fatal wounds indicated by long strips of red cloth and a dragon voice recorded by Chicago actor Tracy Letts, the Pulitzer and Tony-winning playwright of August: Osage County. The approach is consistent with what the House has been bringing to the Arsht since The Sparrow in 2011, notably in Death and Harry Houdini.  Like their other productions, it’s touted as the kind of theater for people who think they don’t like theater.

But the script by Allen and Chris Mathews delves into the punishing burden of leadership, the danger of demagogues using catchphrases to manipulate a populace, the clash between government serving the greater good versus personal liberties, on and on. And yet, the House balances it all out with wry humor played directly past the fourth wall into the audience.

Under the greatcoats and flintlocks, the formalized language and broadswords, the authors have carefully crafted the play both in its cinematic narrative drive and in its thoughtful underpinnings. For instance, they succeed for much of the first play in aligning our allegiance with the likable boy on his journey toward becoming the king. But slowly, it keeps nagging at your American DNA for self-rule that his goal is to supplant the dysfunctional but independent democratic factions into what is essentially a benevolent but dictatorial monarchy.

Trinity has several such interesting clashes. For instance, this project and the House itself is a labor of people who cherish and celebrate their societal roles as storytellers. Yet storytellers are the villains of the piece. The inherent fabrication and exaggeration in storytelling is cause for caution as insurrectionists and demagogues use the Scheherazade-like power of storytelling to create damaging fictions to mislead for less than altruistic purposes.

Among the production’s many virtues is that despite an immense amount of establishing backstory being unloaded in the first half-hour and numerous expository regularly dumped as the journey barrels along, the scriptwriters, director, designers and cast keep the story clear, engaging and moving. This is laudable since the audience is peppered with unfamiliar and often unexplained quaint place names, character names and political infighting.

The other primary asset of, again everyone involved, is the absolute commitment to create this imaginary world. While there are conscious gleeful nods to the theatrical tricks – no one pretends this is in the least bit naturalism – it cannot be overstated how crucial and successful it is that the House team lives inside every moment. No one winks or condescends, from the leads down to the supernumeraries. Their commitment is so total that most audiences cannot let them down by not committing equally.

The production does fall short of one of the stated goal: to create a parallel American-based mythology. There are few if any such evocations except having one scene echoing the Old West and one character resembling a gunslinger.

The sets are minimal, since the scores of locations change every couple of minutes. The clear sense of place is established by the House’s expertise in morphing lighting by Lee Keenan and subtle shifts in the near constant aural soundscape by Joshua Horvath underpinning the pilgrims’ progress. Like everything else in the House ethos, the use of sound effects might not call self-conscious attention to itself, but its devotion to detail cements the perception of three-dimensional world. For instance, you don’t just hear an arrow loosed from its bow, you hear the bow string being pulled back. You don’t just hear a coin clanging in a tin bucket, you hear it whirring through the air.

The acting is admirably consistent from its troupe of about 20 who inhabit an estimated 50 characters when they are not skillfully animating animal puppets as in Warhorse from feral foxes to a stag seemingly made of iron sturdy enough to carry riders, designed by Jesse Mooney-Bullock. Standouts include Kevin Stangler as the hero Casper Kent, Kara Davidson as the archer-strategist Rienne, John Henry Roberts as the haunted taciturn Hollow Thom, Joel Steakley as the effete demagogue Henley Hawthorne and Joe Bianco as the pragmatic pirate Davy Boone.

Besides an inventive array of props, the facet best creating a credible world is the stunning motley of costumes by Melissa Torchia. A score of styles and periods from disparate eras and lands and times are mixed and matched with a gleeful sense of abandon from Restoration frock coats to battered top hats with Indian-beaded hatbands. All of them are weathered and begrimed from decades, perhaps centuries of use.

Should you go? Only you can answer.

The Hammer Trinity from the House Theatre of Chicago and the Arsht Center’s Theater Up Close series will perform at 1 p.m. Saturdays and Sunday through May 8 in the Carnival Studio Theater at the Arsht Center’s Ziff Ballet Opera House, 1300 Biscayne Boulevard, Miami. Tickets are $150 for all three, $55 for one show. Running time is about 9 ¾ hours. (305) 949-6722 or www.arshtcenter.org. 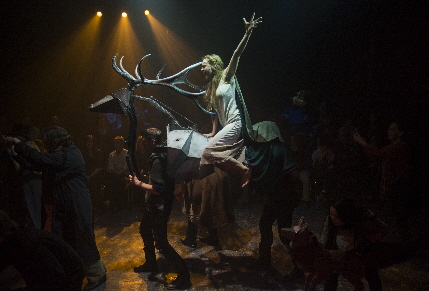