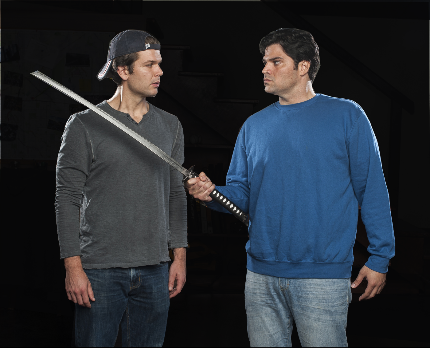 Like any accomplished journalist, David Holthouse knows a good lede when he writes one.

“This time last year, I was plotting to kill a man.”

That’s how this gonzo journalist began “Stalking the Bogeyman,” his award-winning memoir for the Denver alt-weekly Westword, in 2004. It’s how he began a truncated audio version of his story for public radio, which aired in 2011 on This American Life. And it’s how he began a stage adaptation co-written with Markus Potter, which premiered off-Broadway in 2014 and which is now enjoying its regional premiere at GableStage.

The subject of this multimedia exploration of coping, shame and vengeance is the rape Holthouse suffered at age 7, at the hands of the 17-year-old son of a family friend. His story unpacks the night in question early and spends the rest of its varying duration charting the consequences of the crime over 26 years and three cities. We witness our hero’s attempts to put the trauma behind him, develop a drug addiction and grow increasingly obsessed with his assailant’s death, going so far as to purchase a gun and a silencer and arrange a rendezvous with the man—who, by this time, is raising kids of his own.

The result is both personal therapy and an universal case study for a violation that’s committed frequently but discussed rarely. In respecting the gravity of Holthouse’s words, GableStage’s production is virtually mirthless, proceeding with the grim, methodical determination of its protagonist.

Taylor Miller plays Holthouse at each stage of life—opening the show as the 30-something narrator and flashing us back to key moments and conversations in his evolution from rape victim to possible assassin.

The assault occurs in Anchorage, in 1978, in the basement bedroom of the nameless teenager referred to only as the Bogeyman (Alex Alvarez). Upstairs, the teen’s parents (Bill Schwartz and Barbara Sloan) are playing an innocent game of cribbage with David’s parents (Patti Gardner and David Kwiat), but in the darkened dungeon, the Bogeyman plots his attack: impressing and then threatening the pubescent boy with a sword and nunchuks, liquoring him up with scotch, willing him into submission and finally unzipping his pants and smothering the boy’s face with a pillow. When he finishes, he informs David that if he tells their parents, or anyone else, about the rape, he’ll gut him “like a salmon.”

Years pass. Holthouse moves to Phoenix and finally Denver, advancing his career and encountering the Bogeyman only on occasion, each time reopening the wound. His only confessor is an ex-stripper turned drug dealer (Barbara Sloan) who supplies his cocaine and with whom he shares a history of abuse. The more he discusses the crime, the more he seeks a second-amendment remedy, especially after learning that the Bogeyman has relocated to Denver.

Director Joseph Adler’s casting is mostly spot-on. Miller’s steady composure holds the narrative together without ornamentation, acting as both our Virgil and Dante when deconstructing his hellish backstory. He is especially convincing as his 7-year-old self, transforming into a stoop-shouldered, brow-furrowed, weak-voiced object of humiliation.

Alvarez, whose intimidating size has made him a shoo-in for many aggressive roles, is unforgettably menacing as the title character, correctly presenting him as rapist, bully and psychopath—possibly, but not necessarily, in that order. The normally elegant and erudite Sloan is exceptional as David’s outspoken confidant with a sordid past, a performance all the more revelatory because most would never think of her in such a part.

Kwiat doubles in an ancillary role as a backslapping, close-talking, government-fearing gun salesman, injecting the right mix of camaraderie and paranoia into the small part. Less successful is the cartoonish deployment of Schwartz as a Chicano gang lord with oversized teardrop tattoos. Despite the makeup and attempted accent, Schwartz is undeniably Caucasian, and the scene descends, for the only time in the show, into what feels like parody.

There are other missteps, too. Saturday’s opening night still felt like a preview performance, at least on the tech side. I counted two incorrectly timed cues that added awkward beats to a narrative that is intended to move between monologue and re-enactment with seamless fluidity.

The show also could have left more on the stage. It strikes chords in the head and heart but not the gut, where a few sustained blows could have left us convulsed and watery-eyed. But Potter and Holthouse squander opportunities to push the characters beyond their emotional brinks. The potentially moving moment when David’s parents learn of his abuse concludes just as it’s getting powerful, and the same goes for the climax. Adler softens the intensity in his blocking, as well: As the rape is about to commence, Miller’s back is to the audience, his expression of fear and horror hidden from us.

Which isn’t to suggest this a production you’ll soon forget. Particularly in a summer theatre season chockablock with fluff, Stalking the Bogeyman stands out for its intelligence, bravery, sobriety and sheer darkness (in more ways than one—Bryan Kaschube’s lighting design is atmospherically dim, cloaked in the shadow of memory’s fog). Buoyed by the raw sting of truth that great nonfiction provides, Bogeyman is more than a play. It’s a public service.