Words Have Special Meaning In Guild’s Tuesdays With Morrie 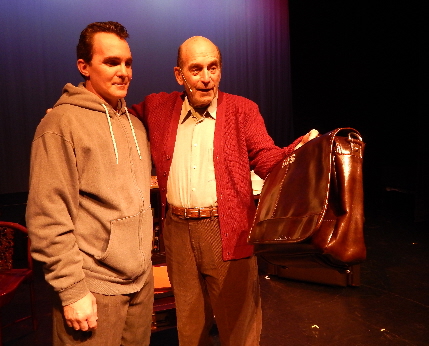 When I worked at the Detroit Free Press as a Features editor in the Lifestyles department, the newspaper’s famous sports columnist Mitch Albom would be featured as a Sunday columnist on the front of the features section. This was in 2000. The book, written in 1997, had spent four years on the New York Times Bestseller list and is credited with being the most successful memoir ever published.

I had instructions when it was my week to edit Albom’s column. Don’t change anything, not even a comma. I remember during one of my Albom-editing weeks that there was something (it was contextual, not grammatical) that just didn’t read right. My strong commitment to perfection just wouldn’t allow me to let it slide. I decided to go against the so-called rule that had been imposed and call Mr. Albom. I’m not sure who had put the “don’t touch Albom’s column” rule in place, but he was gracious and thanked me for being a good editor and agreed with my assessment. We made the change in the copy on the phone together. On Sunday, when Albom’s column appeared, it appeared change intact.

I’m not sure he remembers the editor that helped him with that Sunday column. Sure, one day I think I’ll show up, perhaps nameless or as a curmudgeonly editor in another one of his books, because he probably forgot (I don’t even think he knew my name) who that editor was. Maybe it didn’t matter.

But as I watched the Boca Raton Theatre Guild’s production at the Willow Theater at Sugar Sand Park of the play version of Albom’s book Tuesday’s with Morrie, I couldn’t help but remember my own personal tale of my Sunday (Column) With Mitch.

I had never read the book — I just didn’t think there was much for me to relate to, personally, about the story of a sports columnist who rediscovers a college professor who was his mentor. After he sees the prof on an edition of ABC’s Nightline, he rekindles the relationship, flying weekly from Detroit to Boston for 14 sessions as the retiree coaches him on the meaning of life.

Time does have a way of changing your perspective. Now that I’m just beginning to face my mother’s aging and experience her frustration with the beginning stages of her dementia, I want to not only spend more time with her but hear more of her stories — about when she performed in theater, when she taught stage make up in a local college, when she tap danced with a community group (some of them still write and call her today), how she decided to retire early from teaching and move to Florida to have a second career (she became a diet counselor in Fort Lauderdale) and the different life lessons I can learn from her now as an adult. I hear her stories differently than I did when I was younger. Ironically, I spend every Tuesday with my mother in a ritual where I take her to the beauty salon, lunch and shopping. Tuesdays with Mom.

For some reason, maybe all of the above, Saturday night’s Tuesday’s With Morrie performance from Boca Raton Theatre Guild brought more to me personally than I would have imagined.
The play is a typical two-hander — Morrie Schwartz, a former sociology professor, is at the end of his life. He’s learned that he has amyotrophic lateral sclerosis, also known as Lou Gehrig’s disease and his condition will progress and worsen. Mitch Albom, who ditched his jazz piano playing career and became a successful sports journalist (working early on for the Fort Lauderdale Sun-
Sentinel) seems to have it all – great job, television appearances, traveling to cover the Super Bowl and Wimbledon, yet there’s something within him that lets you know he just isn’t entirely fulfilled.

The subject matter is one of those waxing poetic on the meaning of life. It’s about life and death (“A leaf grows colorful just before it dies,” says Morrie), love (“Without love we’re like birds with broken wings,” says Morrie, while Mitch’s take is about falling in love. He believes the reason they call it falling is because you’re helpless when falling).

There are lessons about children, marriage, money, career choices, and of course, stopping to smell the roses before life passes you by.

Howard Elfman plays Morrie and Wayne LeGette is Mitch. Elfman’s Morrie is a softie — he cries at the drop of a hat and has a perpetual, elfish grin that makes his eyes squinch up. His wisdom is delivered much like a college professor – matter of fact, by the book, but then there’s the part that Elfman has infused in Morrie that makes you believe he’s the guy sitting in his regular booth weekly at the Boca TooJay’s. He doles out his doses of “been there, done that” and “take it from me” to anyone who wants to listen. And even if they don’t.

The play is put together in a way that, if left to its own devices, can create an imbalance. Depending on the players, the direction, and other factors, Mitch’s character can end up being a supporting role for Morrie. And while it takes Elfman time to get out of the gate, when he gets going he’s off to the races.

It’s not LeGette’s first time playing Mitch; he played the role at the Gulfshore Playhouse in Naples five years ago. His portrayal of Mitch starts out buttoned up and remains that way throughout the 90 minutes. While I waited for softie Morrie to rub off on Mitch the way he would on any hard-boiled egg within a few feet of him, LeGette’s Mitch stayed stoic. Yes, mushy Morrie finally brings Mitch to tears, but the actor allowed his Mitch to melt only slightly. Never let them see you sweat seemed to be his motto.

This creates the aforementioned unbalance — whereas the show could have been equal parts a love fest for Morrie and equal parts a rallying around for the arrogant Mitch to watch him get out of his own way, you go away loving the mensch Morrie, but Mitch, well not so much. It’s a bit of a harder road for anyone playing Mitch than the congenial Morrie. When an author makes himself a character, he infuses it with certain qualities, while making sure he doesn’t come off too damaged. Such is the quandry, here.

Perhaps the chemistry between the two actors will warm a bit, things will loosen up a bit and Mitch will equal Morrie and Morrie will equal Mitch.

Genie Croft’s direction utilizes the wonderfully comfortably Willow Park Theater by making the onstage action just as comfy. When Morrie sits in his overstuffed leather chair with a blanket covering his legs, you find yourself breathing out, relaxing just a bit, too. Even when Morrie is doing his breathing exercises, where things get more constricted each time, the mood gets tense, but never traumatic or maudlin. Her direction provides a way for the audience to be on the outside looking in on the pair — we’re never “involved” and we shouldn’t be.

Jennifer Bello’s soft lighting washes over Morrie’s study with something that’s akin to ambient light giving the whole atmosphere something that’s more memory than reality. Linda Shorrock’s costumes tell the story: Morrie’s slacks go to pajamas and slippers as his condition deteriorates, while Mitch goes from a hooded sweatshirt to corporate wear to a zip-up sweater that indicates his progression.

There’s much to like about Boca Raton Theatre Guild’s production of Tuesday’s with Morrie. In fact, there’s way more reverence afforded to Albom’s story, the play co-authored by Jeffrey Hatcher, than this fortune-cookie doling opus deserves. But because of this fact, there are take aways from this Tuesday’s with Morrie. The next time I’m having Tuesdays with Mom, I’ll more than relish each word.