Minor Quibbles Aside, Success Still In The Cards For Gin Game 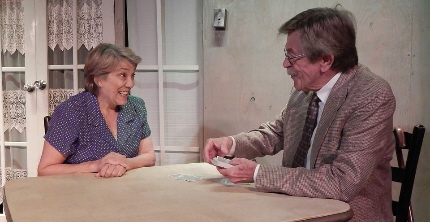 If you’ve ever had a parent or grandparent sequestered in a nursing home, you’ll find much in D.L. Coburn’s The Gin Game that is deeply unsettling.

More so than the play’s sudden violence or its firecracker bursts of profanity, it’s The Gin Game’s references to nursing homes as God’s waiting rooms that stick with you. “You live long enough, soon enough you’re going to end up in a place like this,” utters Weller Martin, one of the facility’s more bipedal residents. Later, after mocking his “catatonic” neighbors who “stare out the window all day,” he adds that his residence is a “warehouse for the intellectually and emotionally dead.”

These statements cannot be dismissed as simply the glass-three-quarters-empty worldview of a cynical old man (which Weller is). They hit us so hard because they’re the absolute truth: These facilities are earthbound purgatories for the discards of society. We know this in our gut, but rarely has it been spoken so plainly and resonated so vividly—in a work first produced in 1976, no less. Sometimes it takes a great piece of drama to reveal what’s right in front of our eyes.

And this is a great piece of drama, one that improves with age and the insight that usually comes along with it. Five years after Palm Beach Dramaworks mounted a handsome production of The Gin Game, Boca’s Evening Star Productions has opened its rendition, a more budget-friendly take that could have used extra care and expense in its technical elements. But it’s an arguably more naturalistic interpretation of the story.

The criminally under-utilized Jim Gibbons plays Weller, one of the nursing home’s lonely leftovers, who whiles away his days playing solitaire on a covered patio. As the play begins, he strikes up a conversation with another resident, Fonsia Dorsey (Kala Kaminsky). It’s “family day,” but no one has shown up to visit either one of them, so to pass the time, Fonsia agrees to a game of gin rummy. She wins, to Weller’s bemused surprise, but he chalks it up to beginner’s luck. Until she wins again. And again. And again.

With each loss—spread over two acts and four scenes, and set over the course of a week or so—Weller’s patience grows thinner, his frustration more explosive, until he finally bursts. The gin becomes more than card game; it’s a blood sport, a metaphor for life’s inequity, an opportunity to air regrets, grievances and provocations while pounding out repressed emotions onto a cheap card table.

It’s easy to play The Gin Game as the story of two opposites, connected only by their disconnection from the rest of the world, whose verbal and physical sparring is a natural outgrowth of their clashing personalities. Visit YouTube and watch Hume Cronyn in the Tony-winning Mike Nichols production of 1978; from the get-go, he’s a crabby, bitter pill for anyone playing Fonsia to swallow.

But Evening’s Star director, Rosalie Grant, sees these two lost souls in different terms, viewing their conflict as a potential friendship that gradually sours, like fruit left out to rot. By delaying their true colors, this approach makes their eventual friction seem even more tragic, and the casting of Gibbons is fundamentally to thank for this. He plays Weller’s overtures to Fonsia as sincere. He is gentle, rather than aggressive, in his initial persuasions for another game of gin, and he shares an unequivocal chemistry with Kaminsky (they’ve shared many a stage together at the former Sol Theatre in Fort Lauderdale). Even Gibbons’ delivery of a line like “I’m still alive, damn it,” is spoken with weathered hope, not jaded enmity.

Kaminsky has the harder role, less outwardly volcanic but more demanding in its interiority. She mostly succeeds, reveling in life’s small favors, from the forbidden delight she finds in a rare moment of swearing to her half-suppressed glee at winning hand after hand against an opponent who can’t understand that it’s “just a game.”

She joins Gibbons in finding the humor in Coburn’s text—even the mordant jokes about looming mortality, and even in moments that seemed destined to spiral dramatically only seconds before. Only toward the end, when she tries to will tears that do not come, does her performance fail to live up to its requirements, reminding us finally that she’s acting.

The nursing home patio scenic design, by Andy Bass and Kate McVay, doesn’t appear as full and lived-in as Dramaworks’ production in 2010, but it certainly leaves one with a feeling of neglect, with its pockmarked walls decaying around the edges, its long-abandoned walker in a corner of the room, its bookshelf with tomes older than many of the nursing home’s residents.

Director Grant’s sound design includes occasional cues from inside the home—a birthday song, a choir performance, a televangelist’s sermon—but they begin and end abruptly rather than fade naturally, and there is no ambient noise around them to lend the space an aural atmosphere; even the lightning and thunder that accompanies one blustery scene feels a little too timid.

Still, there’s a reason this play is continually revived by companies known for challenging theatergoers. The Gin Game isn’t pleasant fare to placate a senior audience. It’s a work that throws punches and pulls none, boldly concluding not with a comforting period but with a harsh ellipsis, petering toward oblivion.