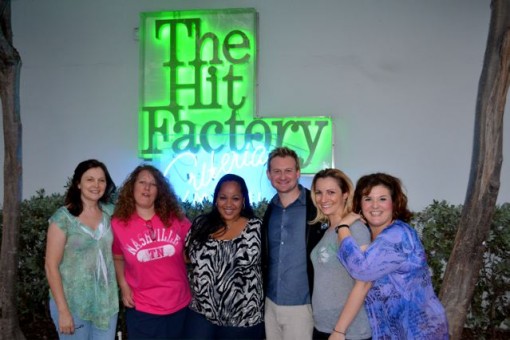 Broward-based GFour Productions is mixing and issuing a CD of Sue Fabisch’s music and lyrics for the show that had its world premiere at the Miniaci Performing Arts Center in Davie in October.

The tongue-in-cheek examination of the joys and challenges of pregnancy and child-rearing was such a success in its initial bow that GFour extended the run three weeks.

GFour, the company that turned’Menopause the Musical into an international juggernaut, should have the CD available in a couple of months, wrote GFour’s Neal Gardner.

The local cast of Kareema Khouri, Lisa Manuli, Margot Moreland and Laura Turnbull recorded the vocals at the Hit Factory Criteria Studio in North Miami on April 6. The music tracks were laid down in New Jersey in February, closer to New York City where musical director Johnny Rodgers and his musicians live. Manuli won a Carbonell this month for her performance as the young pregnant wife seeking the advice of her friends on the title topic.

Initially, the CD will be sold at performances of’Motherhood ‘ and there are plenty of opportunities because, just as GFour hoped,’Motherhood has slated upcoming bookings in separate productions’in Tampa, Fort Worth, Atlanta and open-ended runs in Philadelphia in September and Orlando in January ‘ not to mention a current 60-city tour of Australia including Perth, Brisbane, Adelaide and Melbourne.