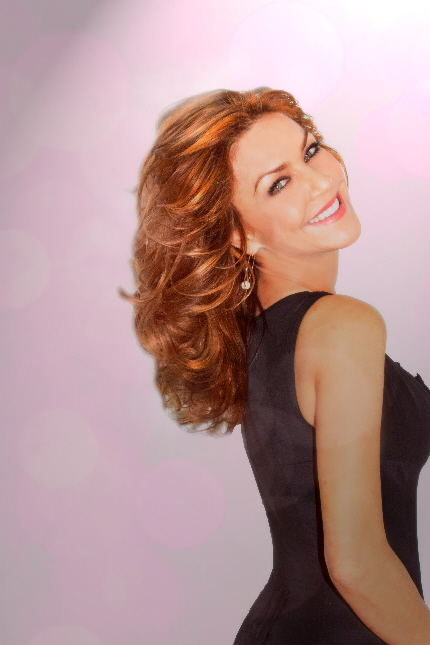 Back in 1977 when 13-year-old Andrea McArdle’s name exploded across the country, the moniker Broadway Baby recognized the talent and charisma powering the unquenchable optimism under the street toughness of her performance as Annie singing the iconic anthem “Tomorrow.”

Now, about to headline They’re Playing Our Song at the Wick Theatre, McArdle’s voice and demeanor reflect the ensuing four decades working steadily to consistent acclaim but never getting caught up in a cyclone of similar proportions.

She is still a Broadway Baby, but closer to the one Stephen Sondheim wrote about in Follies and made famous by Elaine Stritch: “I’ve done it all, and my dear, I’m still here.”

She still has that thousand-watt grin, long curls of red hair, a defiant chin and greyish eyes that sparkle. But that Philadelphia-bred voice has the unmistakable tenor of a veteran pro who prizes the joy of the work but knows the pragmatism and vagaries of the business of show business.

McArdle performed this current role on a tour in 1992 “but I did it without any baggage at all. I was just fresh and full of energy and hadn’t been hurt in life yet or anything… So it’s fun to revisit when I have plenty of baggage, plenty of ‘life experience,’ ” she said with a wry rue-filled laugh during a break from rehearsals Wednesday.

Her forthrightness is typical of clear-eyed veterans who see theater as an infinitely perfectible craft as well as art.  For instance, she has performed in South Florida intermittently and she mentioned one local project with, “Did you see it? No? You were lucky. One of the most horrible musicals ever.”

She remains, at 52 years old, a survivor who has created a career as a working actress, encompassing regular gigs in cabarets, casinos and concerts; starring with Carol Channing and Leslie Uggams in the Jerry Herman revue, Jerry’s Girls; playing a smoking car on roller skates in Starlight Express; creating a role in the short-lived State Fair; stepping into Les Miserables and Beauty and the Beast; touring and often appearing in two book musicals a year at reputable regional theaters such as her gig last spring playing Reno Sweeney in Anything Goes on Long Island. And she’d be happy to return to an eight-show-a-week production on Broadway if someone casts her.

But on this Wednesday, with only 24 hours before previews, she is starring alongside James Clow (Cornelius in the Wick’s Hello, Dolly notable for Leroy Reams as Dolly) and directed by Wick veteran Norb Joerder who has worked with both of them separately.

The 1978-79 show is a kind of musical-a-clef that bookwriter Neil Simon loosely based on the real courtship of composer Marvin Hamlisch and lyricist Carole Bayer Sager who, in fact, both wrote the score for the show.

In it, the quirky but successful composer Vernon auditions an even quirkier new young lyricist Sonia as a possible partner. Their ensuing professional relationship turns personal in a rocky romance tested by the conflict of the two facets. As McArdle said of her heroine, “In loving you, I’m losing me.”

Sager and Hamlisch “are both responsible in their own rights for some of the best of American pop music and movie themes and the like,” McArdle said. “It’s just so interesting because people who are that brilliant are giant pains in the ass, really complicated and emotionally draining, needy, persnickety, all of those things… . Girls like Sonia will drive you crazy, but do you love being driven crazy, and she writes these great lyrics and they are such  a good team that I can’t imagine how complicated that must be.”

Clow quipped that when he was weighing the offer, “I was with friends and I said, ‘Well, he seems like a neurotic and she seems like a kook’ and this friend of mine said, ‘That’s why I think you’d be great.”

The score is very much of its era and Joerder, who has done the show before, says the production doesn’t fight that. “My problem with the show has always been the casting. If you get the right people, the show pops along and works beautifully, and if you don’t, no matter what you do, it doesn’t work,” he adds.

Fortunately, the chemistry among the three seems to be meshing well. As Joerber leaves his leads to the interview in the Wick lobby, he warns them not to bad mouth him “or I’ll put that ballet back in.”

The alchemy is crucial because, McArdle says, “There’s so much fast-paced talking. My biggest fear was it’s really just these two people and we’re so used to having the bells and whistles and the dancers and the legs. It’s really pretty much them, so if you don’t have any chemistry, it’s a long night.”

For a show going before an audience the next day, everyone seemed laid back – given that the show lost a day and half rehearsal to the approach of Hurricane Matthew, the lighting designer had only arrived that day, and Joerder and costume museum curator Kimberley Wick completely redesigned the initial set.

But a camaraderie has sprung up with everyone trading war story after war story: from how Cathy Rigby brought her dogs with her any time she performed Peter Pan, to Clow being slapped nightly by a girlfriend when they broke up in mid-run of a college production of Guys and Doll, to McArdle searching for a place to charge her cellphone during Hurricane Sandy.

She has a lot of stories, but no interview can avoid bringing up Annie. McArdle has built a lengthy resume since then, but it’s impossible to ignore how a 12-year-old actress hired for a tryout of a musical in 1976 at Goodspeed Opera House in Connecticut would find herself a year later in a career-establishing explosion on Broadway. Nominated as the then-youngest actress for a regular Tony Award, she only lost to castmate Dorothy Loudon as Miss Hannigan.

Over the years, she has come to terms with it all.

“That’s a once in a lifetime thing. The celebrity, I was always uncomfortable with it. I grew up so late that when people were wanting to be me, I was wanting to be somebody else. That’s just the plight of adolescence,” she said easily. “Some people get into this business to get popular or famous or whatever, (For me) it was just the process and the work that I liked and I had no interest in the other thing whatever.”

She smiled a bit in reverie. “But I finally made my peace with, you know, the redhead, and finally understood what a gift it was, like to have a signature song. (But) if you get one once in your life and then to have it be your first show, it’s a tricky thing.”

She recalled a conversation with Carol Channing. “I would make fun of the song and she said, ‘You know, when you go up and present on the Tony Awards, any award show, or you walk into a party, they will play your song. And she said, ‘Poor Leslie (Uggams has) been doing great stuff all this time and when she goes on the Tonys, what are they going to play?’ And I said, ‘I don’t know.’ ” McArdle mimicked Channing’s distinctive voice. “And she said, ‘Eggszactlee!’ ”

“I work all the time because of that. So I’m thankful for that because there are very few theater people who have any name value out of the industry.”

In fact, she has played Miss Hannigan twice, sang “NYC” in the 1999 television version, and even sees other Annie productions occasionally. But like several other people connected to the original show, she’s straightforward about her disappointment.

“I hear the new national tour is probably a little closer to the original production and the national tours. They were great. But man, it’s hard to watch (others). I mean when ‘Easy Street’ gets a smattering of applause (in these revivals), your memory is (the audience members) were up and clapping for ten minutes. It’s like Dorothy Loudon had to improvise because they wouldn’t stop. That’s the way I remember it.”

And then suddenly, after her London run in the show, things changed. “The sad thing was when I was hot and fresh off of that success, American Broadway was dead. They weren’t funding any writers. So if it weren’t for the British invasion that started coming in, all those theaters would be torn down and you’d have just Marriott Marquises and Microtels, and all the history would have been gone.”

She said without rancor but a bit of wistfulness, “But they used to create stars and develop properties and roles for (actors) and they just didn’t do that anymore. I just shake my head. Legends don’t just arrive; they are carefully honed and made.”

But that was half a lifetime ago. She was married for 23 years, lived part-time in Hollywood, Florida, because her now ex-husband worked for Carnival Cruise Lines, and had a daughter with whom she has acted.

The teenaged girl’s belt of a voice, plaintive and brave at the same time, has changed, she averred. “Oh yeah. Annie was the last show done (on Broadway) with no microphones and I’m lucky I have a voice left because it ruined a lot of kids who could never sing again because it did so much damage. But I was so young and I had so much treble and so much ping in my voice and it was so bright and clean like you’ve never been hurt. Now, it’s got loads of texture.”

In fact, her voice was a bit husky Wednesday because she was yelling the day before trying to recover her Papillion companion Lola who got loose near the canal alongside the Wick Theatre.

“It’s a wonder I have any voice today,” she said with Lola looking up innocently at her during the interview. “I was hysterical because all you could hear was cars zipping around.”

Time to go back to work. She and Clow get up from a table, quipping with faux bravado about the imminent previews.

She throws her head back and says, “Three moments of mine in the show actually work already. So we’ll go and grab the rest along the way.”