Dramaworks To Take On The “Other” Tennessee William Play, The Night Of The Iguana 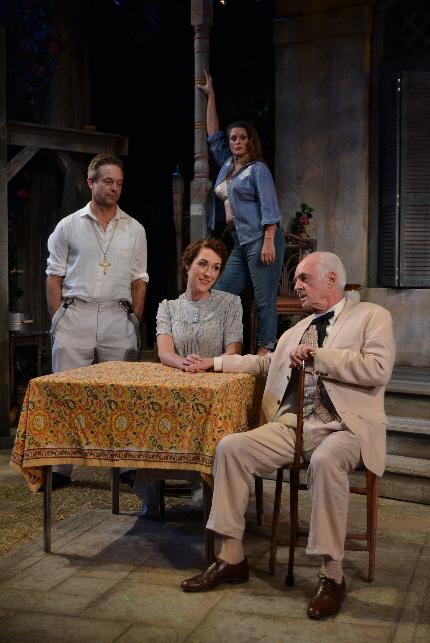 The Night of the Iguana is the “other” Tennessee Williams play, the one most theatergoers have heard of, maybe even seen the Richard Burton-John Huston film, but likely have never gotten around to seeing on stage.

Palm Beach Dramaworks is providing an opportunity to fill that gap on their patrons’ cultural checklist when it opens its 17th season this month.

The 1961 drama dissects the inner lives of lost souls in the fourth-rate coastal hotel Costa Verde in the fetid Mexican jungle in the 1940s. Each person is desperately seeking emotional salvation in meaningful connections with other people.

Among the wildly diverse collision of people is the alcoholic disgraced ex-minister T. Lawrence Shannon, now reduced to leading tour groups. There’s also the hotel owner, the lusty irreverent and recently-widowed Maxine; the too-gentle-for-this-world spinster artist Hannah; her doddering 96-year-old father Nono who is finishing writing an epic poem in his head; the steamy 16-year-old in heat Charlotte who persistently tempts Shannon, and the nominal head of the tour group, the morally judgmental and suspicious Miss Fellowes.

A strange cross of naturalism with slightly surreal moments of symbolism, poetry and crassness, Iguana is a challenging play, said William Hayes, Dramaworks’ producing artistic director who chose this piece as the only one he will direct this season.

Despite the carnality of Shannon, Maxine and Charlotte, almost every character is struggling with loneliness stemming from various kinds of isolation.

“What they have in common is the choice of living an isolated life,” Hayes said. But during the course of the play, they gingerly take the “risk and connect with other human beings. Hopefully, this will start a conversation of what the benefits can be, the hope of a more fulfilled life despite the risks.”

To a degree, the sexual facet is a reflection of them desperately reaching out. Shannon, in particular, “is in such a desperate place that he has a physical relationship with anything he can,” Hayes said. Yet neither he nor anyone else has much of an emotional connection other than Hannah with Nono.

In fact, the play closes with some sense of salvation, unlike what happens to the Wingfields and Blanche Dubois.

Shortly before the original production opened on Broadway, Williams told The New York Times, “I didn’t feel like writing a ‘black play.’ “ He said that the theme of the play is “how to live with dignity after despair.”

Some of this, Hayes believes, reflects the tumult in Williams’ life at the time, although he spent much of his life in that state.

“As a director, you know that a playwright writes on a subconscious level as well as a conscious level, working out their demons, sorting through their own emotional turmoil which is very much what is going on in Night of the Iguana,” Hayes said.

Among the major directing challenges was that Williams increasingly explored more theatrical metaphorical facets in his somewhat realistic environments. For instance, Williams threads through a family of German tourists who are both stereotypically comical but also judgmentally threatening since they represent the rise of fascism on the other side of the world.

The cast has several familiar faces. Shannon is essayed by Tim Altmeyer, a northern Floridian who made a strong impression in 2014 when he played the man wanting to reclaim a Parisian apartment from the current occupants in Dramaworks’ My Old Lady.

Maxine, the part originated by Bette Davis on stage and Ava Gardner in film, will be played by Kim Cozort Kay, one of the frequent leading ladies at the Caldwell Theatre and who has been working at Dramaworks and other venues since she returned from helping run a North Carolina theater.

Hannah is played by Katie Cunningham, a New York City-based actress who has worked several times at Sarasota’s Asolo Rep.

Nono is also undertaken by Dramaworks veteran Dennis Creaghan and the judgmental Miss Fellowes will be Irene Adjan, with other local actors in supporting parts including David Nail and Brian Varela.

The atmospheric setting of three rooms in the mangy hotel fronting on a communal veranda is by Michael Amico, whose photo-realistic designs for shows such as Picnic and Tally’s Folly have been a favorite of Dramaworks audiences and who has recently come on board as production manager.

A large cast, complex technical issues and a difficult script start the season off as a challenge, but Hayes welcomes it. Speaking of another project, he said, “I think it’s important initially to make big splashes and to think big. I don’t think you accomplish anything unless you set your sights really, really high.”