Avi Hoffman Takes on 5,000 Years Of War In Outre’s An Illiad 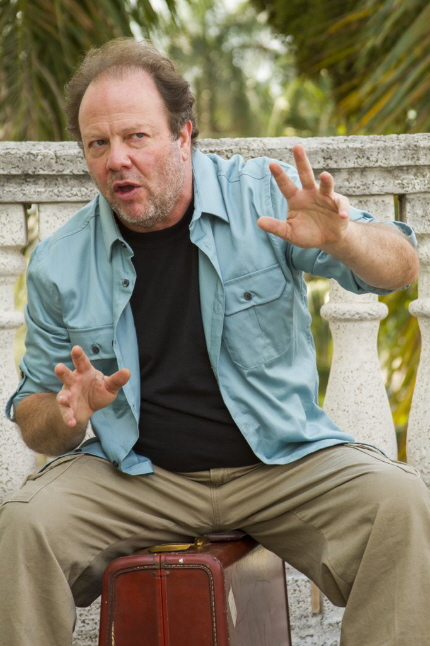 Playing a 5,000-year-old poet decrying humanity’s addiction to rage and violence, clothing his warning in a modern retelling of Homer’s epic tale of the Trojan War, this is not your grandma’s Avi Hoffman sitting here.

But it is Hoffman sitting here in rehearsal, striving to learn 47 pages of dense script as the sole storyteller in Outré Theatre Company’s An Illiad slated to open Saturday at The Studio at Mizner Park.

The cool-headed veteran of decades of professional performances is rarely spooked by a role. Of his Too Jewish song-and-dance revues, he said, “I can hide behind the music there.”

And yet he is clearly jazzed as he talks about the challenge alongside director Skye Whitcomb and assistant director Sabrina Lynn Gore. He’s sporting a scruffy beard for the piece but his eyes are shining and his voice is growing with enthusiasm, sparking a secret smile of appreciation from his colleagues.

None of the three see An Illiad as a dry, musty piece of inaccessible literature that must be stomached like castor oil. Instead, the vision is a vibrant, riveting and sometimes gory story whose timeless relevance to today is the very point of the play

The work is called An Illiad rather than The Illiad because the paradigm of tragic warfare embodied by The Trojan War has been duplicated innumerable times. “The point is that it’s never ending,” Hoffman said.

The choice of the piece reflects the aesthetic of Outre. “I was searching around for a new piece nobody had heard of.” It helps that Whitcomb teaches The Illiad to his high school classes during his day job at American Heritage School in Plantation.

An Illiad marks the second full production of Outré, which mounted the edgy musical The Wild Party in November. That show, hampered by technical problems, was ambitious: 39 cast and crew members including 15 actors and 9 musicians. While there’s only one actor this time, the production values are just as complex including sound effects and projections.

The work is a close fit for the part of the mission set out by artistic director Whitcomb and managing director Nori Tecosky in workshops and staged readings since October 2011: use highly theatrical techniques to immerse the audience in the experience, all in service of a socially conscious, thought-provoking work.
So when the poet talks about a specific soldier, the audience sees a projected photograph of a young soldier in the trenches during World War I. “This is Jamie. This not a bunch of bodies,” Hoffman said.

Still, the linchpin is the actor. The piece requires a charismatic, inherently engaging and chameleonic actor accustomed to holding an audience single-handed for 80 minutes. Hoffman was the company’s first and only choice, Whitcomb said.  The two had met through Hoffman’s wife, Laura Turnbull, when Whitcomb acted with her at Mosaic Theatre’s production of Lombardi in 2011.

But anyone coming expecting to see Tevye or Pseudolus will look in vain. The character coming clear in rehearsals, Gore said, “it is not him.”

It’s an interesting team with a company that treasures its status as a band of mostly young but unusually talented theater professionals seeking challenging assignments. As co-dependent as they are, Hoffman jokingly notes that he’s probably been working longer than the directors have been alive. But rehearsals have been a collusion of detailed experimentation as ideas are offered, explored and rejected as often as they are adopted.

“This has been renewal. I love coming to rehearsal,” Hoffman said. Many people know Hoffman through his song-and-dance roles and broad comic portrayals. But this is more in line with his dramatic roles in such shows Superior Donuts, The Quarrel and  Address Unknown at GableStage.

Hoffman’s character is a poet, “a singer of songs…with the terrible job since the beginning of time to record the minutes of every war,” he said. He wanders the centuries seeking audiences to tell the tale of the Trojan War, desperately hoping that they will heed its lesson and free him from his task. Just back from the latest conflict, probably Syria, he greets us in the bowels of a disgusting dank sewer being designed by Sean McClelland.

The task of memorization always fascinates audiences, but less than a week from opening night, Hoffman was venting his anxiety about the chore on Facebook. The killer is a single speech, making clear Man’s insatiable appetite for violence and his slavery to his own rage. It’s a four and half page litany listing every single war that has occurred in the past 5,000 – literally hundreds of armed conflicts.

“There has only been 11 years without war in the history of world,” Whitcomb notes.

Hoffman began reading over the script back in July when he first accepted the role, but recent assignments, like finishing a run as Billy Flynn in Boca Raton Theatre Guild’s Chicago just a week before Illiad rehearsals, got in the way. Besides, Hoffman said he finds it easier to memorize lines when they are tied to Whitcomb’s specific staging movements.

The 2010 script is the creation of playwright/director Lisa Peterson and well-known character actor Denis O’Hare (Take Me Out and True Blood). When it was produced at the New York Theatre Workshop in 2012, O’Hare and Stephen Spinella handed off the role to each other during the run. The new script, already a major telescoping of the text into a 100-minute show has been edited down another 20 minutes for this production.

Homer’s 15,000-line poem is one of the oldest pieces of Western literature still in existence. First written down in Greek around the 8th Century B.C., it relates the last year of the Trojan War that had occurred 400 years earlier.

The script quotes at length from Homer’s massive epic in the 1990 translation by Robert Fagles that features magnificent and visceral poetry. But, much of the play is written in contemporary conversational English.

The script underscores the gritty horror of the war. As Hoffman says, “Do we even know what it is like inside a trench” at the front lines? It also explores the profound collateral damage on families left behind. But “there’s also an enormous amount of humor and we’re finding more every day, especially in the first 30 to 40 minutes,” Hoffman said.

Hoffman’s familiarity with the original text is minimal. He studied it in high school in Israel and tried to read it for this project “but I only got about a third of the way through.”

It includes short stretches of Greek that Hoffman doesn’t know. He learned how to pronounce the words with videos created by Michael Dionissiou who played Miles Gloriosus in his 2006 production of A Funny Thing Happened On The Way To the Forum at New Vista Theatre Company. While still working on it, Hoffman’s Greek had a bit of Yiddish-sounding flavor.

This entry was posted in Features and tagged An Illiad, Avi Hoffman, Sabrina Lynn Gore, Skye Whitcomb. Bookmark the permalink.