Jackie Rivera: An Adult At Last in Caldwell’s New Family Drama After the Revolution 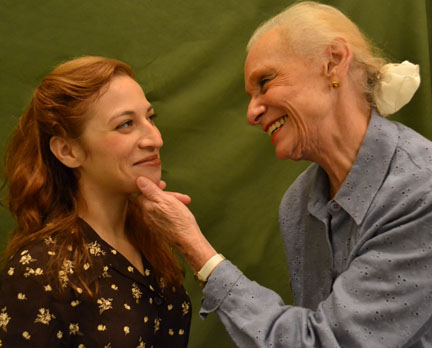 Jackie Rivera as the third generation activist being cuddled by her grandmother, HarrietOser

Relief suffused Jackie Rivera’s voice with such force that it added an unsaid “finally” to her sentence.

“This is the first time I’m playing someone my age,” Rivera said.

Although she just turned 25, the diminutive actress is best known locally for a procession of pugnacious characters negotiating late adolescence: the misfit student in Speech and Debate, the larcenous slacker in A Behanding in Spokane and the precocious teen in August: Osage County.

She has gotten her wish in spades: She has the linchpin role as Emma, the idealistic social activist in a family of leftists and liberals in Caldwell Theatre Company’s season opener, the recent off-Broadway success,  After the Revolution.

“I had some concern as if, my God, will I come off too young? I’ve been in a teenager’s head for the last four years of my work,” she said just before previews began this week.

She’s grateful for the trust of Artistic Director Clive Cholerton and the production’s director Margaret Ledford that she can carry a show with a cast of veterans including Gordon McConnell playing her father and Harriet Oser playing her grandmother.

Ledford doesn’t sound worried: “Jackie has an incredibly hard work ethic that goes hand in hand with her effortless ease on stage….  Jackie brings an intelligence to her work and the willingness to try anything, but strives to make it right.”

The drama traces the chastening education of Emma who has become the standard bearer for her family’s tradition of Marxist political activism. During the play, a disillusioning secret emerges about her legendary grandfather who was blacklisted  for refusing to name names during the McCarthy era. That – and the older generation’s cover-up of that secret – forces Emma to reevaluate her values.

“It’s one of these roles that has an incredible arc,” Rivera said with relish. “It’s one of those very clear things as this character is changed by the end of the play. It’s so cathartic.”

Like a Clifford Odets play, Amy Herzog’s script is both about politics and family. Rivera finds it easier to plug into the latter.

“I myself am not so politically inclined. That has been more of a heady kind of research for me,” she said.

Since the Tampa native now lives in New York between gigs, she stopped off at one of the early Occupy Wall Street rallies to do on-the-ground research. The looseness of the protest was eye-opening.

“The big vote that day was whether to actually go to Wall Street and actually occupy Wall Street or just to do it metaphorically in a park. I was there for an hour and somebody got up and said, ‘What exactly are we doing here? We need to know what we’re fighting for before we start organizing the peripherals.’ And I thought that this is great, I love that everyone is here and people have showed up, but I don’t know what it’s about.”

Still, she has an idealistic streak herself. She wrote on Facebook, “…and, one day…who knows when…I’ll change something… don’t know how big it’ll be… but people will know… not everyone… but the people who should, will. And it’ll be good. And that’s my journey.”

She related more easily to the family dynamic. Having felt like a bit of a “different” in her own family, she can relate to the relationship issues facing Emma. “I am kind of standing on my own in the later part of the (play) when (Emma) finally gets a chance to question all the things she been told. That’s been true of my entire life.”

As a result, “I connected immediately to this girl and I think it was more in terms of familial betrayal than it was the politics. I had to finagle my way through the political (themes) and root it more in the betrayal by my father.”

Ledford said the role is not as huge a leap for Rivera as audiences might think: “Her own sensibility as an aware young person and (being) quite a spitfire herself makes Jackie a perfect actor for this role. Emma and Jackie share a great deal of similar qualities: Youth, ambition, being dynamic, passionate and full of heart. Unlike Emma, Jackie knows her place in the world.”

Although she’s living in New York, Rivera remains a committed founding member of The State Theatre, a home-grown company created by the loose-knit New World Mafia. The company was founded by a collection of classmates at the New World School of the Arts in Miami, most of whom graduated like Rivera in 2009. The troupe was established to create their own opportunities regardless of whether they were cast locally.

The impetus was “knowing what we were capable of, but not were able to show in the professional world,” she said.

It produced a few small showcases before its first major undertaking last January, Billboard. Working with classmates she has worked with for years like David Hemphill, Betsy Graver, Anne Chamberlain, Nick Duckart, Mark Della Ventura, among others, meant she had a chemistry that encouraged her to try new things.

“We know how to push each other,” Rivera said. “David knew I had taken some design classes… and he asked me to be our resident designer for our company. To have that trust and comfort level, it’s wonderful to have these friends show they really believe in you.”

It’s the kind of encouragement, coupled with the Caldwell experience, that is emboldening her to strike out in new “adult” directions such as applying for a prestigious program at the Public Theatre in New York to develop skills in playing Shakespeare.

“I remember I took once took a class in it at New World” and felt Shakespeare was outside her skill set. “I thought, well that’s something I’ll never do.”

But she experimented by playing Hermia in a St. Petersburg production of A Midsummer Night’s Dream last spring. “I’ve always been one to take the leap,” she said.

So, she’s leaving troubled teens aside for a while and applying to the Public’s training program that only accepts actors who are at least 25 years old.

She was referring to learning how to speak iambic pentameter, but there was a larger resonance in her words that were applicable to her current adult role.