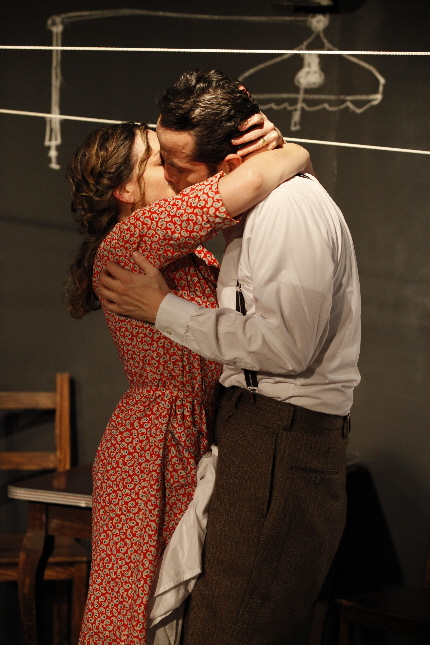 Director, producer and playwright Michel Hausmann, the founder of Miami New Drama, says that with the company’s first production last January, The Golem of Havana, “we showed that there was a hunger in Miami Beach for theater.”

Miami New Drama has taken up residence at the Colony Theater, not a venue that immediately come to mind as place to view compelling drama works. The Miami Beach-owned, 465-seat Colony Theater, which opened in 1935 as a movie theater by Paramount Pictures, usually has one-off shows passing through – live performances like comedian Sandra Bernhard and singer Linder Eder, local dance companies, and film festivals.

But Hausmann says it’s time for a change. “As theaters go, it’s one of the great theaters in the state. A jewel of Miami Beach.”

This weekend, Miami New Drama presents a production that Hausmann discovered when he was working on The Golem of Havana at Barrington Stage in Pittsfield, Mass.

Limited to only four performances, Miami New Drama presents A Special Day, a play about a life-changing encounter between an overworked housewife and a mysterious bachelor, set against the backdrop of rising fascism on the day of Hitler’s 1938 visit to Mussolini’s Italy.

The fascist overtones of the play are as pertinent today as they might have been almost eight decades ago, according to Hausmann.

“I am very worried as an artist about the fascist rhetoric that is so prevalent in the current presidential campaign and we wanted to address that head on,” says the artistic director. “This is a conversation that we should all be having now. Theater has the power of communicating and it should be political. We should be commenting on what’s going on,” he says, adding that the play is “a perfect example” of Miami New Drama’s mission statement.

Titled Working on a Special Day when it made its regional debut at Barrington Stage, the play had received recognition internationally. Produced by off-Broadway’s The Play Company and Mexico City-based Por Piedad Teatro, it was presented off-Broadway in 2013 and The Flea Theatre in New York City presented the play’s debut in 2012.

Originally, MND was to perform A Special Day in a smaller space, which would have allowed for a longer run, but “technical difficulties” made the Colony Theater more suitable, despite the availability of only a limited time slot. “If all goes well, we hope that it can return for a longer run.”

“The work we do should be as dynamic as the city we’re in. This is exactly what we should be presenting – a Mexican theater company with Mexican actors performing an Italian story in English,” says Hausmann.

The actors who originated the roles, Ana Graham and Antonio Vega, star in the MND co-production. Graham, founded Por Piedad Teatro and is artistic director. Vega is a member of the company and its literary department director. Por Piedad Teatro partners with other companies such as New York’s Play Company to perform works mostly in New York City. But Miami could be next on the list.
“Por Piedad Teatro has a strong connection to Miami and they want Miami to be a home away from home for them. Perhaps do some workshops and develop work here.”

The affiliation, which is not yet a “formal association,” emphasizes Hausmann, is just the beginning of a vision in mind for Hausmann and Moises Kaufman, playwright-director, founder of Tectonic Theater Project (The Laramie Project) and artistic associate at MND.

“Both of us have theater friends around the world and we want people to come to Miami and create work together,” says Hausmann.

It’s already happening. Kaufman’s Tectonic Theater Project and MND are partnering for a show in the fall, The Tallest Tree in the Forest, Daniel Beaty’s   solo play about legendary performer and political activist Paul Robeson, and directed by Kaufman.

“It’s been in development for the last three years and it received an original production, but Moises wanted to have this stage of a lab happen in Miami with new changes and to give the story time to grow,” says Hausmann.

They are also working with the estate of Thornton Wilder to create a multi-lingual Our Town for 2017. “It has a huge cast, so we want to make sure that we can do it and that we have the resources.”

Venezuelan-born Hausmann says the new non-profit theater was born in 2013, began officially forming in 2014 and 2015, and then launched its first production in 2016. Twenty percent of its money comes from Miami Beach and Miami-Dade County, but 80 percent comes from individual donors. “We have a board of directors that believes in the work that we are doing.”

“We feel that the Colony Theater should be a place that does theater and there is a lot more room for activity there.”

Being permanent at the Colony would also foster the engagement of a high-school program MND wants to create. “As we grow, we want to become more organized and have a stable educational component. We need to spark conversations and there are students from many Miami neighborhoods that would benefit from seeing, especially the Robeson, show. I commend the many theater companies that do bring in students to see their work. You’re not only showing them great pieces of art, but you’re creating future audiences and artists.”

Miami New Drama presents in association with The Play Company and Por Piedad Teatro, A Special Day, 8 p.m. Thursday, May 5, through Saturday, May 7, and 3 p.m. Sunday, May 8, at the Colony Theatre, 1040 Lincoln Road, Miami Beach. Tickets $39-$49. Visit miaminewdrama.org.

This entry was posted in Features and tagged Miami New Drama, Michel Hausmann. Bookmark the permalink.