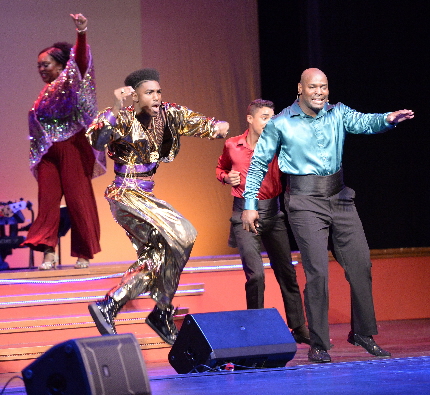 Deep in the recesses of some Caucasian culture mavens’ minds is the over-generalized misperception that most African-Americans are not really lovers of theater.

Sure, they’ll go see revues of Motown or jazz, those observers acknowledge. Some may show up to see Raisin or Ma Rainey, The Wiz. But even then, they are not the majority of patrons in the audience. Maybe for a Tyler Perry comedy on tour.

Every other year, the National Black Theatre Festival puts the lie to the perception.

This past summer, tens of thousands of African-Americans from around the U.S. and other countries as well jammed 12 venues in Winston-Salem, North Carolina to savor more than 30 tragedies, musicals, comedies, movement pieces, and revues produced by predominantly black theater companies .

Pat Williams and Shirley Richardson, founders of M Ensemble in Miami, the oldest operating black troupe in Florida, have been coming since the festival began in 1979, back when they would just hang out at a club until 4 a.m. with playwrights August Wilson and Amiri Baraka.

“You get it’s about celebrating the culture,” Richardson said. “Every story needs to be heard and ours has been squashed and hidden for so long.”

Her company’s acclaimed production of Jackie Moms Mabley was invited there in the late 1990s, filling up a small venue, then invited back for sold-out houses at a larger venue.

They love the festival but believe it lost a bit of its flair and verve when its founder – the flamboyant Larry Leon Hamlin – died in 2007. But they return religiously because it’s the place to find new work for their seasons.

It’s where they first saw Layon Gray’s Kings of Harlem, the basketball drama that provided the company one of its most popular and acclaimed pieces. “We would never have known about it” otherwise, Richardson said. “It’s our one chance to see so many works and meet so many people.”

This summer, they watched with interest a play called Cowboy drafted only days earlier by Gray; they hope to close their upcoming season with the fictional drama based on a real African-American lawman/bounty hunter.

Indeed, the festival provides unlimited opportunities for networking and recruiting with playwrights, actors, directors and producers. “It exposes the kind of talent that’s out there.”

Carey Brianna Hart, a local actress-stage manager, attended this summer for the second time. “People fly in from all over the country. They take time off work. Some aren’t even working. They travel together, like ski clubs or people who travel together to China.”

She said, “I get jazzed and fired up every time.”

The American Theatre Critics Association held its summer conference there as part of its renewed emphasis on increasing diversity among critics and most of the attendees were blown away — not by the fact that such theater existed because critics have been documenting the rise of minority-themed theater and companies for a half-century.

The revelation for the mostly white critics was the tidal surge of minority audiences hungry for theater that spoke to their issues, their culture, their reality. The festival, held every other year, drew hundreds of attendees who wore T-shirts and other memorabilia attesting to this being their third or thirtieth return.

The festival’s main attraction on what is nicknamed Black Theatre Holy Ground is the curated range of offerings produced during the previous year by professional troupes, community theaters and historically black colleges. But besides the intense networking, the long jammed weekend is filled with seminars, concerts, films, speeches, workshops, cultural tours, staged readings of works in progress,  simple readings of 30 nascent scripts by actors sitting in a circle with a playwright, and a massive market of crafts, clothes and food from black-owned companies.

An opening gala honors major African-America artists, this year celebrating Leslie Uggams, Pearl Cleage and Andre De Shields, the recent Tony winner for Hadestown who started a festival news conference leading a singalong of the black national anthem “Lift Every Voice and Sing.”  Among the luminaries this year were Brian Stokes Mitchell and Margaret Avery.

To be fair, some of the productions on display are more polished and more deftly executed than others. Some of the technical aspects are dead perfect; others, well, the most anticipated offering was the North Carolina Black Repertory Company’s musical Jelly’s Last Jam, but the acoustics in one of the largest major venues were cripplingly abysmal.

But it’s the meat of the material that shines from painfully current events to biographies of key pioneers, often in musical revues. There were performances of well-known work like Ruined and The Mountaintop, plus tributes to Aretha Franklin and Sammy Davis Jr.

A sampling of what we saw besides Cowboy and Jelly’s Last Jam:

Canfield Drive from the Black Repertory Theatre of St. Louis presented a surreal sometimes satirical indictment of the Michael Brown controversy in nearby Ferguson, told in part by black and white commentators on a local television public affairs series.

For Colored Girls Who Have Considered Suicide When the Rainbow Is Enuf, from students at Norfolk State University, had minimal sets and production values, but the young women delivering Ntzoke Shange’s poem-play were stunningly effective.

The Front Porch Society from Houston’s The Ensemble Theatre is Melda Beaty’s new dramedy in which a clutch of African-American people living close together in a Mississippi small town portray a wide range of hope and skepticism on the Election Day that eventually made Obama president. Funny banter and the after-affects of long-ago racist tragedies highlighted a play that deserves more productions

Anne and Emmet is a much-produced drama from the Langhart Communications Group of Washington D.C. which posits Anne Frank and Emmett Till meeting in a kind of purgatory in which they compare their tragic stories, discovering common ground in the murderous prejudices that claimed their lives.

Soul Man, produced by Sarasota’s Westcoast Black Theatre Troupe was a Night at the Apollo brand retrospective revue of the genre with a supremely charismatic quintet of male performers and a kick-butt live band. The very thin excuse for a book had an older female DJ educating a modern day prince of hip hop on how the past produced the present. The audience failed to resist singing along with the music of their lives from “A Change Has Got To Come” to a hallelujah “Higher and Higher,” from The Temptations to Marvin Gaye.

The next festival is slated for 2021, likely in late July. Little specific information is available yet at https://ncblackrep.org/nbtf-info/. But interested patrons should begin making plans — hotels in the area start booking immediately and especially one year out. The only problem is that the plays are selected quite late in the process and the exact line up and details are not announced until about a month before the festival. People just decide they are coming whatever is on tap.

The shows are spread out over downtown and various college campuses spread out across the area. But a well-designed system provides free shuttles back and forth from the festival center at the downtown headquarters (this year the Marriott) to every venue near and far and every performance. The city and surrounding area have numerous hotels, motels and bed-and-breakfasts operations. The critics stayed alongside many actors and tech people at a Best Western just north of town that shuttled people for free.

While some events are free, attendance can be pricey although fans seem ready to invest in it. Beyond airfare, hotel and meals, Hart said she spent $187 for six shows.

Winston-Salem is a delightful town of 246,000, once a hub of tobacco and banking, which hosts numerous colleges and is dotted with galleries and an array of restaurants for every taste. The festival is promoted throughout the town year-round. Out-of-state visitors can fly in to Raleigh-Durham (then have about a hour and half drive), Charlotte (an hour and 20 minutes), Greensboro (a half-hour) or take a connecting flight to the municipal airport.