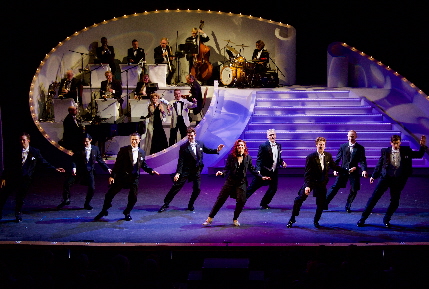 Whenever this troupe of supremely talented terpsichoreans start tapping in precision sync, backed by a live full-throated swing band, audiences will be thrilled.

Patent-leather black shoes flash and limbs pound the boards with an enthusiasm, agility and facility that one opening night patron accurately described as glorious.

Then they open their mouths. Whether it’s the predictable plot, miserable dialogue, debatable acting chops or humor so lame it needs a walker, audiences start tapping their toes to count the minutes until the next number.

We’re just guessing that the creators of this show had written an intentionally memes-and-tropes script meant to be a gentle lampoon-homage of kitsch and corn like Dames At Sea, 42nd Street or the actually well-constructed Crazy For You. But without that sub rosa wink at the audience missing here, no one can pull off such deathless dialogue like: “I’ve got an idea. / Ah, I thought I smelled rubber burning.”

Hot Shoe Shuffle is an Australian musical tracking seven tap dancing brothers from Butkus, Indiana (not Bupkis?) who go to New York City to claim the inheritance from the estranged father’s estate. The will requires them to recreate their father’s old-style dance show Hot Shoe Shuffle. They dive into the daunting task along with a woman who claims to be a previously unknown sister April and their dad’s stern taskmaster pal Max.

None of this matters. The show is designed to give these seriously skilled dancers an opportunity to bop, frolic and sometimes sing to a catalog of hits from the 1920s to 1940s including Waller’s “Ain’t Misbehaving,” Mercer-Arlen’s “Acc-cent-tchu-ate The Positive,” Gershwin’s “Shall We Dance,” a timeline outlier with Kander & Ebb’s “How Lucky Can You Get from Streisand’s 1975 Funny Lady, a blazing finale of pure hallelujah with Ellington’s “It Don’t Mean a Thing (If It Ain’t Got that Swing”) and a rousing “Putting On the Ritz,” (although I kept flashing on Gene Wilder and Peter Boyle.)

The musical from Down Under, a country whose main contribution to the genre is Hugh Jackman, opened in 1992. It was a major hit there and in the West End. A revised version played in Houston in 1998. And now it’s here in a production built from the ground up locally led by veteran director Jonathan Van Dyke and musical director Jason Tucker.

Of course, the hero of the production is choreographer Justin M. Lewis who has the proverbial field day working with a collection of local and visiting artists who managed to produce this stunning display in under three weeks. (The script has Dad’s will giving the boys a measly four weeks to recreate his old show.) Sean McGibbon as Spring, the leader of the brothers, also gets a couple of breath-taking Astaire-like solo spots, which he co-choreographed with Lewis.

And then they open their mouths. Well, to be fair, some of them can sing, especially Alex Kidder as eternally grinning April who caresses “Long Ago (And Far Away)” sung not about a boyfriend but to the prospect of finally being in a stage show, and a sultry 11 o’clock “Birth of the Blues.”

Theoretically, the boys Spring, Buck, Wing, Slide, Tip, Tap and Slap each have a defining personality trait: shy, brainy, whatever. But we could never follow it. It didn’t help that either these guys’ enunciation was pretty bad or the sound was muddy or some combination. But we couldn’t understand half the dialogue nor those brilliantly scripted zingers, which may have been a blessing.

The plot, such as it is, needs no further exploration; you’ll have it all doped out in minutes. And apparently logic doesn’t matter. Halfway through the second act, the fictional show is in terrible shape with a week from the opening, nobody has any money to produce it, and (spoiler alert) the whole thing has been a scheme. And then, the very next scene, we get to what Shuffle has been prepping for all night: a 10-piece band in formal wear sits on an art deco set with curving stairs, on come our heroes in top hats and tails, and everyone executes a series of polished numbers with the precision of a Busby Berkley extravaganza. Maybe this leap is meant to be part of the satire of the period’s musicals with a similar disregard for making sense.

A shoutout is due to Tucker’s bandmates who have had the sheet music a few weeks, but who have only rehearsed together since one day before dress rehearsal. It’s a tribute to the skill of local musicians who can meld together so smoothly so quickly: musical theater pit vets Julie Jacobs on drums, Martha Spangler on bass, Phil Fest on guitar, and the clarion sounds of Courtney Jones, Danny Healy and Jason Pyle on brass, and Glen Rovinelli, Wes Anthony and Andrea Gilbert on reeds.

This is a production of the Wick, reputedly home to the largest single theater costume inventory in the country. So it’s no surprise that costume designer Jim Buff has put together a memorable array, from the Crayola-colored clothes the boys wear in the opening scenes to the April’s dark, silver sparkling gown with a black gossamer train cascading down a long staircase.

But all is forgiven and forgotten when these folks go into motion doing back flips, shuffling the old soft shoe in a sand box, or prancing like circus ponies in unison to Lewis’ impossibly intricate steps.
Hot Shoe Shuffle plays through Nov. 10 at The Wick Theatre, 7901 North Federal Highway, Boca Raton. Performances 2 p.m. Wednesday, Thursday, Saturday, Sunday; 7:30 p.m., Wednesday, Thursday, Friday, Saturday. Valet parking is no longer complimentary. Runs 2 hours with one intermission. Tickets $75-$85. For tickets, visit www.thewick.org or 561-995-2333.