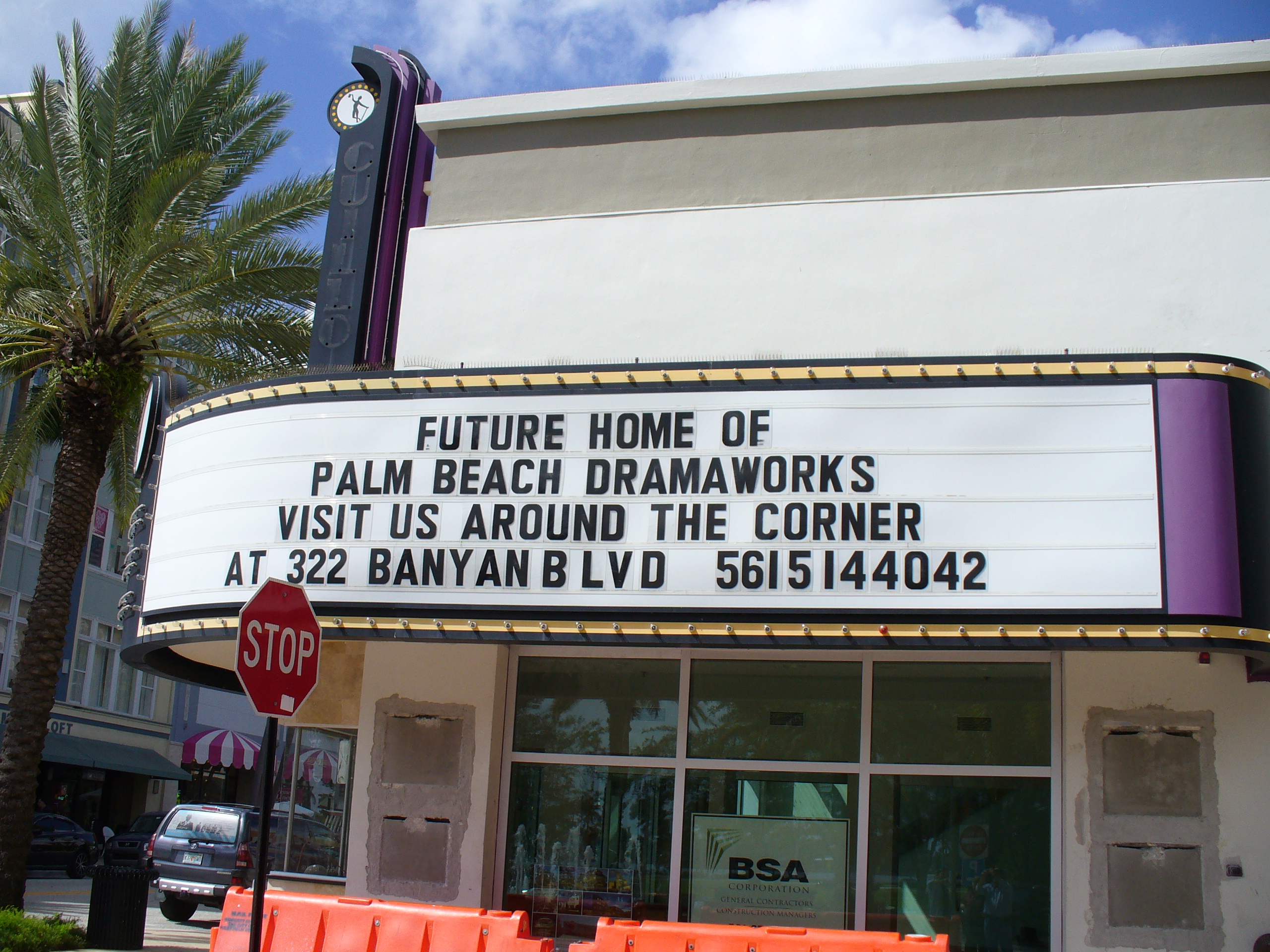 Even with a month of work remaining before the gala opening on 11/11/11, Palm Beach Dramaworks’ new home in the transmogrified Cuillo Center is breathtaking.

It’s a vision of marble tiles, sophisticated muted colors, all angles and curves down to the hand railings and ceiling contours. The elegant flowing audience chamber is unrecognizable from the off-putting retro cockpit that once stood here.

“Sometimes I walk in here and cry,” said William Hayes, producing artistic director and co-founder, as he showed off the theater during last week’s move-in.

General manager and co-founder Sue Ellen Beryl added, “I don’t think we really could understand from the drawings on paper what the chamber would become. We worked so hard to capture that magical feeling, that moonlight feeling. It’s better than I ever dreamed.”

The realized dream aside, Dramaworks’ move to anchor Clematis Street in downtown West Palm Beach is emblematic of an artistic and financial triumph. In a time when many theater companies are struggling to stay afloat, Dramaworks is on track to buy the building within five years.

As the troupe opens its 12th season, its history contains lessons in growing an arts endeavor in direct spite of a recession. Among the precepts: stay laser true to an identifiable niche mission, nurture an audience on an one-on-one almost hand-made basis, and get involved in the political side of community affairs. But above all, hew to strict business principles such as doing considerable research, budgeting and never spending what you don’t have in hand.

The end result has been a theater company that has never operated in the red.

To the contrary: Beryl, Hayes and co-founding company manager Nanique Gheridian estimated last year that they would take in about $700,000 in ticket sales during the previous year. But the bottom line at the end of that fiscal year was $1 million. They had predicted a net profit of $20,000 to $30,000; the net exceeded $300,000.

Those cold figures are rooted in a fervent following among its patrons. On Oct. 8, executive assistant Lara Wagener reported that the staff had sold 3,271 season subscriptions. That compares to about 2,750 in the previous season. That higher figure encompasses the fact that almost 500 past patrons did not renew, although many said they planned to buy partial season packages.

“People are excited about the move,” Wagener suggested. “And people know how hard it was last year to get single seats,” considering that several shows sold out the 84 chairs in the current home at 322 Banyan Street.

Chairman of the Board Mark Perlberg guessed, “People want to get in at the beginning.”

The founders are modest, but their pride is obvious in the immense amount of work; in the essential support of their patrons, their generous donors and the cooperation of local politicians.

“Hopefully, the success is because of the work,” Hayes said. 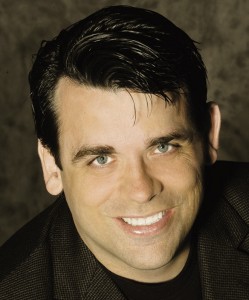 The centerpiece of that work is a five-mainstage show schedule that focuses on “theater to think about” including revivals of classics of 20th Century theater such as next month’s All My Sons by Arthur Miller and contemporary successes such as the following show, The Pitman Painters, which played in New York last season.

Famously, whenever the company inserts a lighter show, usually in the summer, the audience complains that they can get that elsewhere.

They listen. The staff makes the time to court their patrons. “We care about what they think. The little old lady who just wants to call and tell us what she thought about the show, she feels heard,” Beryl said.

It’s not that the founders aren’t anxious about the future. Their nagging concerns start with the unpredictability of an economy that has several theaters fundraising hand to mouth. No one forgets the financial meltdown of Florida Stage a few blocks away earlier this year. An early concern that did not develop was that Florida Stage subscribers might be reluctant to subscribe to a full season somewhere else.

Another issue is the change from the intimacy of the current 84-seat theater in a converted storefront to the 218-seat amphitheater (completely reconfigured from the Cuillo’s 377 seats). Such a switch was one factor that alienated Florida Stage patrons in their move to the Kravis Center’s Rinker Playhouse. Preserving as much intimacy as possible was a goal in the new Dramaworks auditorium. It is still only nine rows deep and puts the edge of the stage only 35 feet from the back wall of the auditorium.

Another worry is sound. Despite considerable sound-proofing, Hayes frets about the city’s push to revitalize downtown with more activities including rock concerts on the adjacent waterfront property. Hayes has been working with the city Parks and Recreation Department with such solutions as asking that speakers point toward the water rather than downtown.

Another unspoken concern is that donors and patrons will mistakenly assume the theater doesn’t need continued financial support to hedge against more economic downturn. “We want an endowment to protect us for when we have a show that doesn’t do so well, to ensure we can continue,” Hayes said.

But these are problems they welcome at a milestone they could hardly have envisioned in late 2000 when Gheridian, Hayes and Beryl put on their first season in Palm Beach Atlantic College’s auditorium. All three served as actors, directors and designers at various times. The productions, frankly, were not critical successes.

But husband and wife Hayes and Beryl had business backgrounds as well as considerable experience in theater. Trained in theater, Hayes was a retail manager for a national shoe company for 20 years to pay the bills and Beryl had an accounting degree as well as time spent managing theater companies. 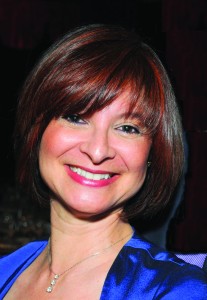 Authority, which found them nearly free space in a tiny hole in the wall on West Clematis for their second season.

That was the beginning of another Dramaworks hallmark: working with political and civic leaders that paid off in easing deals like the Cuillo sale. Over the years, Beryl has served on Arts-in-Education Professional Development Committee for school district; Hayes has served on the city’s Cultural Affairs Council and the Economic Forum of Palm Beach County.

In their fourth season, they moved to Banyan. The quality of the work had slowly improved. But something about the move helped the company turn the artistic corner. That season, they mounted acclaimed productions of The Dresser, No Exit and a successful chamber musical, Jacques Brel is Alive and Well and Living in Paris.

But even two years into their stay, the founders saw the Banyan site had serious limitations. Some performances were selling out; the company began adding extra performances.

In the fall of 2007, they began negotiating with Bob Cuillo who owned the old movie theater-turned-legit house, two blocks away at the corner of Clematis and Narcissus. But talks fell apart and the company considered other possibilities including a move to Palm Beach Gardens.

“Then Mayor (Lois) Frankel got involved,” Hayes said. “She tracked me down on the street and asked if we wanted the Cuillo. I told her we had tried three times and it fell through. She said, let us handle it.”

Eventually, the Community Redevelopment Agency bent on reviving the area brokered a deal that even now stuns Beryl. The CRA bought the building from Cuillo for $2.85 million and offered to rent it to Dramaworks with an option to buy.

Over five years, Dramaworks will pay the carrying charge on $850,000 of the city’s purchase price. The CRA also will make a long-term loan to Dramaworks for that amount when the theater buys the building in five years.

Dramaworks will immediately pay an escalating rent beginning at $10,000 a month. That money, eventually totaling $500,000 will be applied toward Dramawork’s eventual full-out purchase of the building.

Dramaworks also had to come up with just under $2 million for the design and construction of overhauling the building, new equipment, moving costs and many other expenses. With the purchase of the building, the bill will eventually come in about $5 million.

But a decade of courting donors paid off with an overwhelming response.

With the support of less than three dozen angels, they have raised $2 million in cash and $2.2 in pledges. The actual capital campaign doesn’t even start until a gala slated for November 11.

The planning for what the building would look like resulted from extensive aesthetic and logistical brainstorming including consulting a theater facility expert and a field trip touring theaters through the northeast. Working closely with Michael Amico on the appearance and practicality of their plans, they became a fan of the look of some theaters in Washington, D.C. which have a sleek but raw industrial feel. 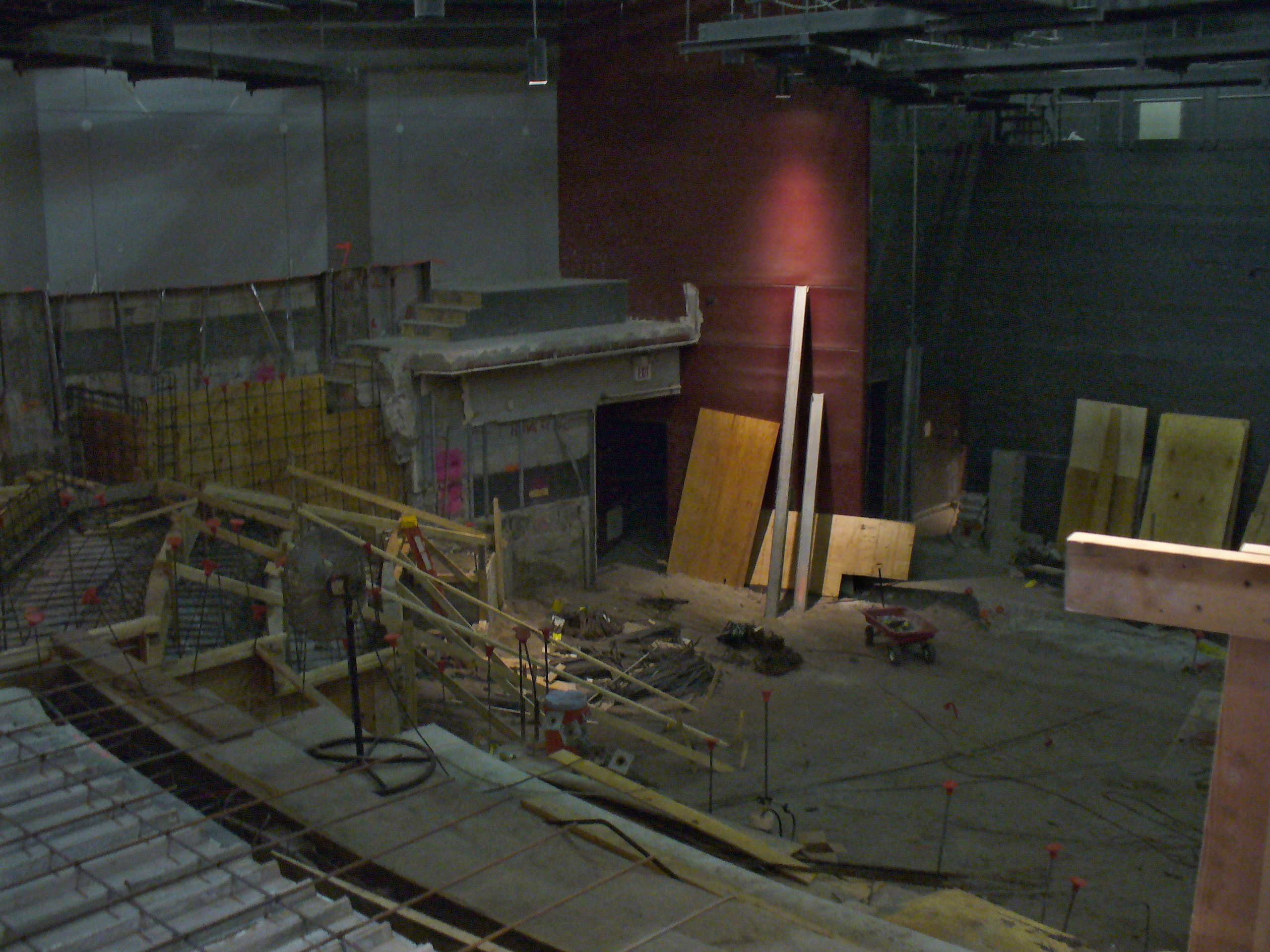 They hired Gino deSantis of Zeidler Architects who helped design the Kravis Center and Bill Branning of BSA Contractors who was recommended by the Caldwell Theatre. They had to do far more than just remodel the lobby and business areas. Their key task was to rip out the Cuillo’s infamous stadium seats and install a user-friendly auditorium. The lobby, backstage and second floor would all be overhauled into pristine storage areas, offices, three dressing rooms, plus a black box space usable for staged readings, workshops, rehearsals and VIP gatherings. The theater also needed to lease a new 7,000-square-foot scene shop on Fern Street.

The only things left over from the theater’s origins will be the iconic Florida terrazzo floors in the lobby and a built-in telephone booth that will be commemorated with a plaque.

It became clear that the new space would provide blessings and challenges. Amico could build two-story sets as he has with All My Sons’ suburban backyard.

Formerly limited to a handful of actors, All My Sons will have a cast of 11, a mix of out-of-town and local actors including Gheridian.

It also means reconfiguring their season. They will still do five shows (six are possible in future years), but instead of nine-week runs, they will likely have four-week runs. Among many other savings, this allows hiring actors for 8-week contracts instead of 13 weeks. That means the actors will get paid more per week and be available for other jobs sooner, but will save Dramaworks money on weekly pension payments, lodging and other running costs.

All that requires boosting the operating budget 30 percent from $1.4 million to $1.95 million just to start.

But the team remains confident.

Hoping not to call down the wrath of Thespis for their hubris, Beryl said, “I just don’t see how we can fail.” 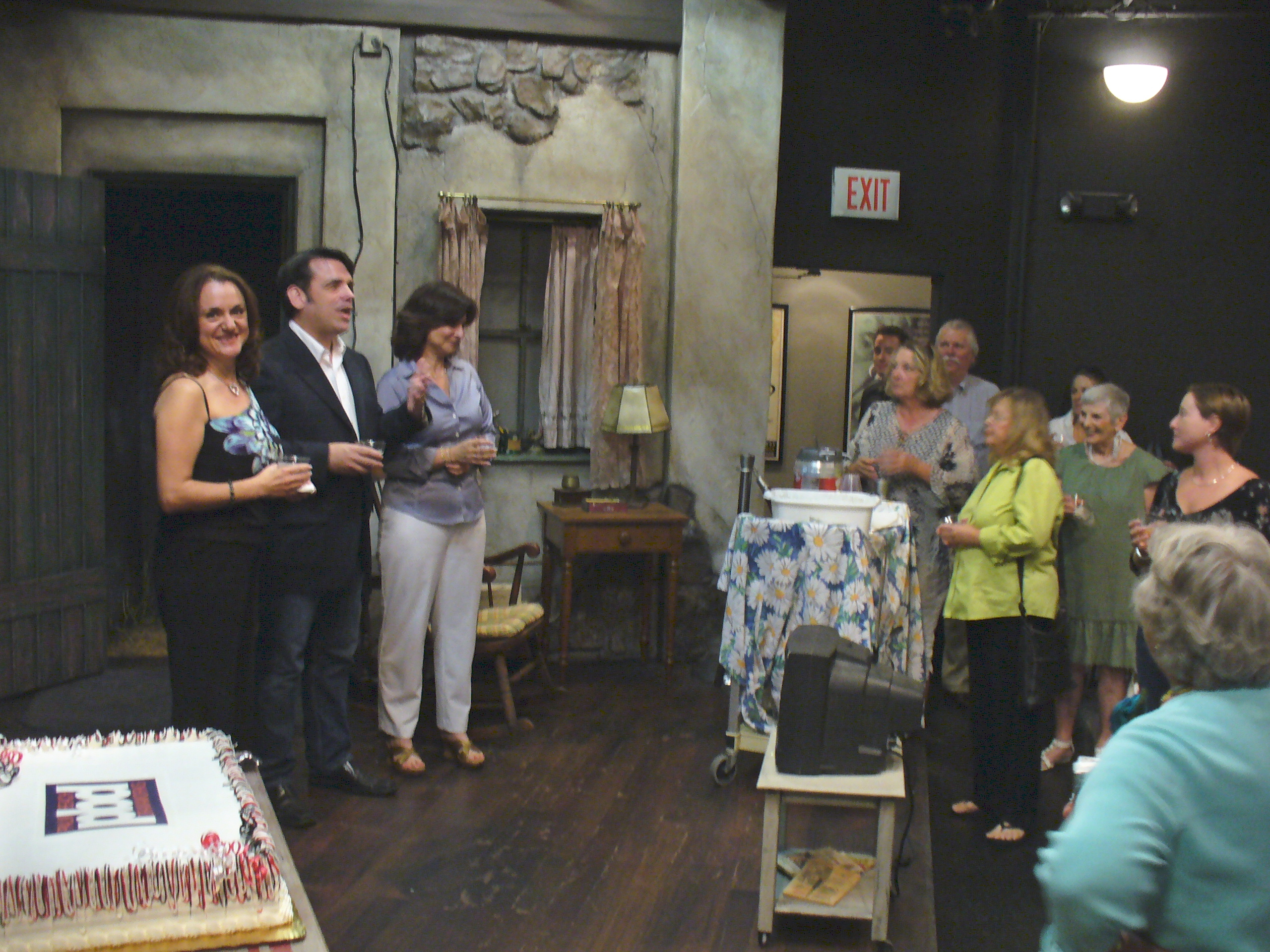 Founders Gheridian, Hayes and Beryl at final performance in the Banyan space in June / Photo by Bill Hirschman