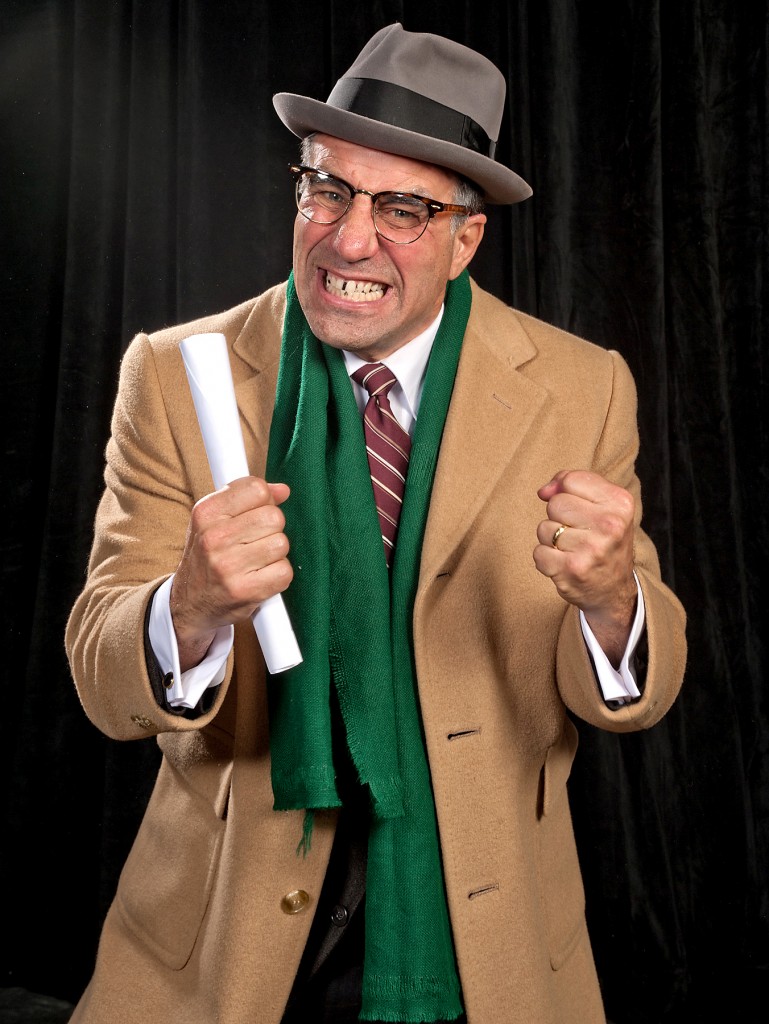 Knock on wood, halfway through the run of Lombardi, Ray Abruzzo hasn’t lost his voice.

Portraying the legendary coach whose booming pitbull voice reflected his full-out  approach to everything from sports to relationships, Abruzzo spends a good chunk of the 90-minute play at the Mosaic Theatre shouting and berating everyone from his players to his wife, Marie.

“There is a lot of yelling and screaming. It takes a lot of energy,” Abruzzo said during his one day off last week. In doing research, the actor found “in all the footage, he’s usually screaming.”

Vocal cords aside, actors and audiences both need some variety, so Abruzzo and director Richard Jay Simon scoured the script for places to bank Lombardi’s histrionics. It wasn’t easy.

“You try to find places where you don’t yell. You think you’ve found a line where you pull back, and then Marie asks, ‘Why are you yelling?’ ”  he said.

Some might wonder if an actor mostly known for television (The Practice, Dynasty and “Little” Carmine Lupertazzi in The Sopranos) would have the vocal chops for the long haul of a straight play. But Abruzzo has been working in the theater since he was a young man.

“Theater was my first love. Being a very young actor, I said would never do anything but theater, never television, maybe do a film with someone great. That lasted two weeks,” the 57-year-old Abruzzo said, punctuating his Queens brogue with a laugh.

But during his extensive career in Hollywood, he sought out theater roles where possible.

“Living in L.A, you get into making a movie or doing television because it’s very rewarding. There’s not too many big theaters, the Geffen and the Taper, and (the roles) are such a premium that they can get anybody to do the parts. But there’s a million little theaters.”

For instance, he participated for 10 years in a Monday night new play reading program called the Playwright’s Kitchen Ensemble, started by Dan Lauria, the star of The Wonder Years. The series attracted some of Hollywood’s biggest names wanting to keep their theater chops honed: Charles Durning, Gena Rowlands, Peter Falk, Dom De Luise and many others.

That led to Abruzzo’s current gig. Lauria played the title character in Lombardi when it played in New York last season.  He had showed the script to his old friend, Abruzzo.

“He suggested, ‘Ray, this is a part you should do.’ And I said, “I don’t see myself in this role at all. It’s nothing I connect with.’ It didn’t register with me. And then I saw Dan’s Lombardi (in New York) and I said, ‘That’s it,’ ”meaning he felt Lauria owned the part.

But when Simon was looking for a Lombardi, the show’s New York production office recommended Abruzzo.

Analyzing the script in rehearsal scene by scene, Abruzzo began finding those connections. “We went through the whole thing moment by moment in the whole rehearsal process and I’d find a moment and say, ‘OK, that feels real.’ ” Eventually, he joined with the character.

“One line that (Lombardi) said about himself was ‘I’m very quick to anger, but very quick to cry and to laugh’ and that was the kind of key to me. So let’s find these moments within the play.”

Abruzzo also felt a resonance with the sparring but warming relationship between Lombardi and the young writer who has come to profile him for Look magazine, played by Antonio Amadeo. There are moments, he said, when the two actors exchange just a moment’s look that says the prickly relationship is echoing something each of the characters is coping with in their own lives.

Abruzzo, who has written for television and directed theater as well, has few ties to South Florida. But he was surprised opening night when a first cousin appeared. He saw a story about the play in a local newspaper. Now he’s finding there are children of cousins living in the area. “I’m connecting.”

While the drama obviously taps into the national obsession with sports (20 percent of the audiences in New York had never been to a play), the character speaks to Abruzzo and sports-averse audiences in other ways. For instance, many people relate to the coach’s tunnel vision obsession to the exclusion of nearly everything else including family.

The play also looks at the sacrifice that the family makes for such a patriarch, notably here his wife Marie played by Laura Turnbull, who was rarely without a drink in her hand. Her lifelong love and support is almost as awe-inspiring as Lombardi’s achievements,

“It’s a universal theme, looking at anybody who’s married to someone else who is powerful and obsessed and single minded,” Abruzzo said. “There’s a lot of give and take, but she had to ultimately give more than she could take.”

Insights like that and the reception of sold-out houses have made Abruzzo settle into a role he initially resisted.

“Now, it’s very fulfilling . I’d like to play Lombardi again somewhere. Now I feel I can do it.”

This entry was posted in Features and tagged Antonio Amadeo, Lombardi, Ray Abruzzo. Bookmark the permalink.