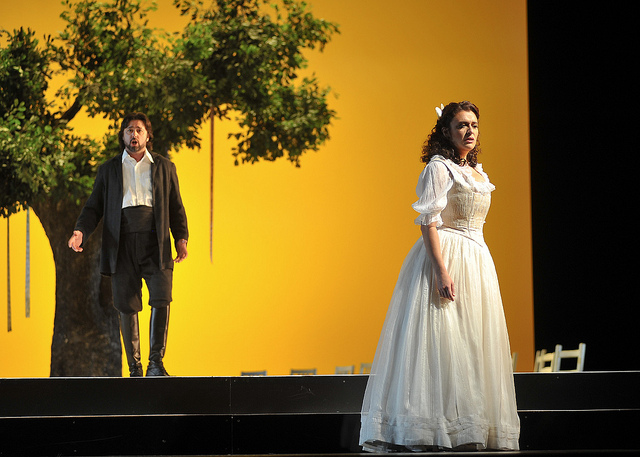 The fiery politics of 1868 Spain on the eve of a rebellion are nothing compared to the politics of the heart raging in the Florida Grand Opera’s season opener, the zarzuela Luisa Fernanda.

Impassioned lovers in a triangle (actually a quadrangle) blithely choose sides not based on convictions, but on how those choices might benefit their romantic pursuits.

This operetta is what would result if Gilbert & Sullivan teamed up with Franz Lehar, wrote in Castillian and created a telenovella version of Gone With the Wind: Luisa is in love with Javier. Vidal is in love with Luisa. Carolina steals Javier. Luisa agrees to marry Vidal, but still loves Javier — all while civil war erupts off stage.

Zarzuelas were wildly popular entertainments in the early 20th century in Spanish-speaking countries including Cuba. But this is the first time Florida Grand Opera has chosen this unique brand of operetta.

FGO acquits itself well with a thoroughly entertaining, if only occasionally moving rendition of this 1932 piece scored by Federico Moreno Torroba and scripted by Federico Romero and Guillermo Fernández Shaw.

This visually stylish, if exceedingly spare black-and-white production benefits from a strong cast that invests more naturalistic acting skills into what is, of course, as unrealistic an art form as exists on stage. Audiences accustomed to far less credible situations in classical opera will not question the emotional gamesmanship crucial to a Byzantine plot more complex than a week’s recaps of Days of Our Lives.

The novice’s ability to follow the plot may be due to the abridged nature of this edition, which began at the Teatro Real in Madrid and has been reproduced around the world. About 20 percent of the dialogue was excised, partly to make the remaining music more prominent for pure opera lovers, and because the language was too idiosyncratic and idiomatic Spanish to translate into other languages. This edition and restaged from La Scala to Los Angeles  turns a three-act opera into two, clocking in at 2 ¼ hours including a half-hour intermission.

What is left is the soaring and swelling music ranging from classical aria structures to Spanish-infused folk melodies to a Viennese waltz. The dialogue retains unabashed sexual entendres, both ribald allusions of seamstresses to the owner of the pants they sew as well as a seducer referring to a garden when he means a conquest’s body.

There’s also a wry sense of humor. The fickle Javier who has been having an affair with Carolina suddenly appears to Luisa. “How long has it been?” he asks insincerely. She answers dryly, “Since the last time.”

All the principal singers are zarzuela veterans from Spain, notably the virile baritone Angel Odena as the older faithful suitor Vidal.  His arias were so stirring that he pulled focus from the other leads: tenor Antonio Gandia as the opportunistic roué Javier, soprano Davinia Rodriquez as the predatory Countess Carolina, and even soprano Amparo Navarro in the title role.

But credit Navarro with the evening’s sole affecting moment, the duet “Cállate, corazón!” when she tells Javier that still loves him but is honor-bound to marry Vidal.

Overseeing the effort was “associate production director” Javier Ulacia who was was an aide to the original production’s director Emilio Sagi. The only obvious flaw was that the fine orchestra led by Pablo Mielgo occasionally drowned out the singers.

The imaginative, stark and relatively inexpensive visual design originating at Teatro Real echoes the production values of FGO’s 2010 season, relying heavily on dramatic lighting from the side, some 30 townspeople silhouetted in the background  — and a lot of chairs. Remember FGO’s Carmen in 2010 with all those chairs?  While all that black and white accentuated a duality, many audience members including this one had discerning its relevance to the plot or theme. The lighting also left principals singing in half shadow and sometimes making it difficult to tell who was singing.

One interesting choice is a visual coda to the finale in which (spoiler alert) Luisa goes off with the cad Javier, leaving the noble farmer to spend his life heartbroken. Placido Domingo’s wife (the couple are rabid zarzuela fans) apparently suggested that Luisa drift halfway back toward the farmer, leaving her decision uncertain and ambiguous, opening even the possibility that she goes off by herself. This critic hates politically correct revisionist overhauls like what had been recently proposed for the New York revival of Porgy & Bess. But Alan Jay Lerner ended My Fair Lady differently than Pygmalion because he just didn’t think Shaw had gotten it right. Similarly, it just feels wrong to have Luisa go off into the sunset with this inconstant peacock without more than an aria of regret.

The end result was a diverting evening that hopefully marks only the first of FGO’s experiments with the zarzuela form.

This entry was posted in Performances, Reviews and tagged Florida Grand Opera, zarzuela. Bookmark the permalink.