Priming the Play: The Furious Competition that Fuels Red 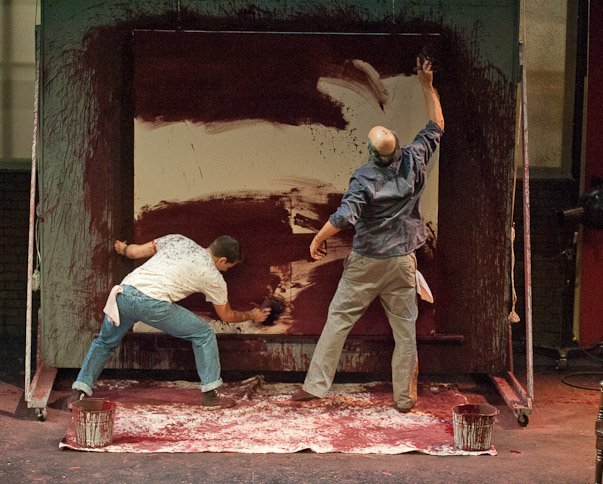 In a play comprised primarily of complex insights articulated at the audience for nearly 90 minutes, what many people remember most about GableStage’s production of Red is a scene without words.

With only a brief spirited slice of Mozart spinning off a record player, two men stand with their backs to the audience, dwarfed by a tall blank canvas. For a moment, they size up their opponent: creating something from nothing.

And then together, but not in tandem, they attack the white muslin with thick bushes and pails filled with a viscous reddish-brown liquid.

Furiously, they slap the paint across their half of the expanse, seemingly ignorant of the other person, intent on some unspoken competition, and yet halfway through, like experienced partners in a pas de deux, they switch sides.

Something urgent is going on here, although likely the characters themselves don’t know what it is.

And almost exactly as the music ends, about 90 seconds later, the two men are done and collapse, physically and emotionally spent.

Although they are only priming a canvas, the silent metaphor is an eloquent representation of the glory of artistic creation and the generational competition between the old tradition represented here by abstract expressionist Mark Rothko and his young assistant Ken.

It’s a stirring episode in John Logan’s play about Rothko at a crossroads in his life in 1958 when he is wrestling with a lucrative commission: to create four murals to adorn the Four Seasons restaurant inside the Seagrams Building in New York.

It’s also a high point for the actors who otherwise spend much of the evening verbally sparring with each other.

“It’s a blast. It’s more fun than it looks,” said Ryan Didato, the actor playing Ken.
He looked at the spatters on his hands after a matinee last week. “You can get your hands dirty. For the next five weeks, I’ll have paint under my nails.”

That’s a good thing for someone trying to capture the character eight times a week, especially since the play’s run has been extended a week until Dec. 11 and they perform in front of high school students two or three times a week.

But there is some minimal choreography to it, especially the crossover when the two switch sides and pass under each other, said Gregg Weiner who plays Rothko. There was even an inquiry into how broad a brush to use to ensure that the actors finished the canvas precisely with the music.

“But it’s only priming, not painting….,” Weiner said. Didato finished the thought like a scene partner, “…so there’s no way to fail.”

The scene, in fact, is an inspired tactic. The audience never sees Weiner/Rothko actually paint a piece of art in a play all about that act, although he comes very close once. So the priming gives the audience a chance to see the artist in something akin to creative fury.

It also, along with a scene in which Ken builds a frame and stretches canvas, injects some physical interruption to the reveries and dialogues. “It does give it a theatricality and energy,” Adler said.

But it also is a character scene. “It shows their relationship,” Weiner said. Didato finished the thought again. “It’s a trust thing. I look forward to it every night.”