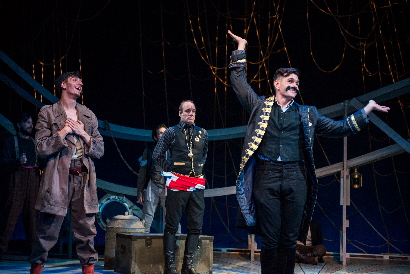 University of Miami student Matt Sawalski and veteran professional Tom Wahl watch Nicholas Richberg in action in the Theater Up Close production of Peter and the Starcatcher / Photo by Justin Namon.

…if you become a teacher / by your students you’ll be taught.”
— Oscar Hammerstein’s The King and I

Underneath all the intense imagination and playfulness inherent in the upcoming fantasy of Peter and the Starcatcher at the Arsht Center, a practical behind-the-scenes lesson is emerging: You don’t have to reinvent the wheel. Unless you want to.

With University of Miami students working alongside seasoned professionals in almost every job, an apprenticeship has been forged that has had such a mutually synergistic benefit that sometimes the lines get blurred who are the mentors and who are the mentees.

The highly theatrical and adult-oriented origin story of Peter Pan is the fourth co-production of the Arsht’s Theater Up Close series and UM’s Department of Theatre Arts.

Among the professionals this time are Nicholas Richberg, who was a stunning John Wilkes Booth in Zoetic Stage’s Assassins last season, and Tom Wahl, the Carbonell-winner for I Am My Own Wife in which he inhabited dozens of characters.

“I love working with the kids…” Wahl caught himself for fear of sound paternalistic. “I keep calling them kids. They make me feel so old; I am old enough to be their…. older brother,” he said with a laugh.

“They are so earnest and they all work so damn hard. They come at everything without all the baggage and history and nonsense that those of us have who have been in this business for so long. How they are doing this and going to classes fulltime, I have no idea.”

Wonder is also the hallmark of the students at the other end of the spectrum according to Abigail Berkowitz, a senior from Pennington, N.J., who plays the spirited proto-feminist Molly, the precursor to Wendy. “I was really intimidated at first because who knew whether they were going to be divas. But they’re the nicest people I ever worked with.”

Their patient willingness to share is a major boon to an actress in her first professional production. “I get to ask them questions about what might be basic to them, but is new to me.”

The students rehearsed for a week before Wahl and Richberg arrived, she said. As soon as they did, “it really changed the room. This crackling of dramatic tension was amazing. The bar was raised….and we have had to step up our game to be on the same playing field.”

But Richberg, playing the precursor of Captain Hook called Black Stache, felt it was important to treat the students as colleagues. “When we’re on stage in rehearsal, individuals have their moments to shine but it’s an ensemble piece. So I see us all as equals. We’re just actors on stage.” Besides, “they’re mostly juniors and seniors, so they know what’s up…. They bring considerable skills.”

In these co-productions, students instantly are expected to emulate the professionalism of the guest artists. Students “have to take on a lot of responsibility,” Fonte said, “The net is taken out from under you.”

The young actors are often amazed and challenged when they see a veteran actor “comes in with three choices up their sleeve” of how to play a moment, Fonte said.

“What we bring,” Richberg suggested, “is a sense of confidence and freedom that actors have to develop. When you’re young, (you’re) doubting your instincts. You have to learn to trust your instincts and realize that as an actor who has been given a role, you have been given a license. You just have to stay open and humble.”

But it’s not a one-way experience, Fonte said. “I think the professionals learn, too, because professionals forget a lot of what got you there. Because of (finite) time and money of commercial theater, (some actors) go for the immediate result,” relying on tricks and techniques they know work. “But in a play like this you have to explore, and it’s great to watch Nick and Tom adjust to that.”

Richberg underscored that lesson: “They are so creative because they have no edit button. They don’t think like older actors, thinking five steps ahead that ‘Oh, that’s not going to work; that’s not going to get a laugh.’ It’s a great synergy.” Of course, it doesn’t hurt, he said that they have about five weeks rehearsal as compared to the “real world” where it’s usually half that time.

Peter and the Starcatcher is the on and off-Broadway hit inspired by, but not slavishly faithful to the spirit, of the 2004 children’s book written by Dave Barry and Ridley Pearson, which has an extra “s” on the end of Starcatcher. It was adapted by Rick Elice (Jersey Boys, The Addams Family) with a subtler humor that would appeal to adults while the spectacle would keep younger folks amused.

Technically, it’s a prequel to J.M. Barrie’s Peter Pan, or The Boy Who Wouldn’t Grow Up. But it’s really an alternative narrative that Barrie wouldn’t recognize. It takes unfamiliar characters and situations, then spins them through a different journey until we end up back again in familiar Barrie territory.

The New York versions directed by Roger Rees (Nicholas Nickleby and Cheers) and Alex Timbers (Bloody Bloody Andrew Jackson) were honored for the extreme amount of inventive staging. It posited a troupe of free-spirited travelling players who used ordinary objects to serve not just as props, but as scenery in increasingly inventive ways as the complexity of lighting and sound ratcheted up. It was nominated for nine Tony Awards and won five.

Fonte saw three versions and loved it. “It turned me into a little kid,” he recalled. But when the show went out on tour, it never came further south than northern Florida. So Fonte was on board when it was suggested by Scott Shiller, the Arsht vice-president who oversees programming,

Their pursuit seemed premature because the licensing rights had not been released, but they knew some of the original producers and asked them to intercede. Even now, few regional theaters are attempting it.

The reason is that the show is very complicated including a chameleonic cast of storytelling narrators ála Nickleby who paly many roles, plus a very specific tone that requires the audience to invest in the show by actively employing their imagination.

Is it an ambitious undertaking? “Reckless,” Fonte said, chuckling.

When Richberg saw the play in New York, “I thought it was so beautiful because it’s so simple. They make props out of nothing. Now that I’m doing, it is so much more complicated. This has so many moving parts, 12 people on stage constantly acting, constantly moving, even when not in a scene, you may be doing background noises. It’s dizzying. I am thinking, ‘When do I get my next four-person play set in a living room?’ ”

Ramping up the difficulty factor is that Fonte did the same thing he did with last year’s Metamorphoses: He blacked out all the stage directions in he script inserted from the New York productions, determined to reimagine the show from scratch, the first company he believes to do that.

One departure is the set. In New York, the play opens on a bare stage and the scenery grows and grows as the company creates pieces from props. Fonte told his old colleague, Yoshinori Tanokura, not to look at the photos of the New York set designs. The result is a sprawling multi-level jungle gym environment that Richberg and Wahl were amazed by.

“It’s going to be spectacular,” Wahl said. “The set is immense and it takes up the whole width and half the depth (of the black box theater.) It is in the truest sense awesome.”

But the key to the show’s success will have nothing to do with what is literally on stage, but the cast’s ability to enlist the audience’s child-like imagination in storytelling – while still tickling their adult sensibilities with puns and anachronistic asides.

“They’re called plays,”Berkowitz said. “And you get to play in it more than any other show.”