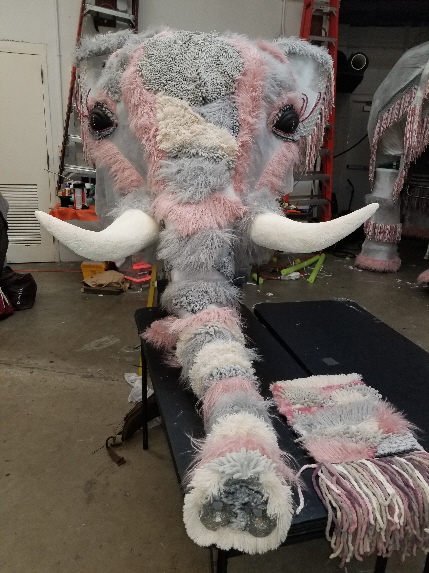 Not exactly svelte, and, yes, her taste in clothing leaves a bit to be desired, her grooming is decidedly askew and her gait will never be described as slinky. But the lovely Jess will likely score as the most memorable ingénue in South Florida in the coming season.

This might be in part because she’s 10 feet tall, 12 feet front to back, and while her hips are only 6 feet wide, she needs another two feet to accommodate her undulating body when she swaggers across the stage.

Oh, and she’s a puppet. A 225-pound puppet requiring three artists hiding under her hide to give her life, plus an actress to read her lines.

The protracted work to birth her has been yet another intense challenge in the career of Florida-based Jim Hammond and his Puppet Network, which has produced everything from marionettes to towering mobile creatures for Day of the Dead processions.

Jess is the centerpiece of Rachel Teagle’s world premiere that posits everyone in the world wakes up one morning to find they have become who (or what) they had dreamed of being when they were eight years old. Some wanted to be astronauts, some princesses. Jess wanted to be a mastodon.

So when Jess’ boyfriend, Clarence, an investigative reporter undergoing a bit of a malaise, wakes to a phone call telling him he has become a spy for a secret organization, he calls for Jess to come in from the next room. What greets him and the audience is, well, Hammond’s sweetheart.

The play is meant to speak to adults as well as children, said Theater Lab’s Artistic Director Matt Stabile. “Your occupation is not what you are…. It is about giving yourself permission to find your own way and walk your own path and you don’t need to be like everyone else, and that’s okay, there are others out there like you and you have to get rid of the veneer to find them.”

Jess is a mélange of “girly” colors, ruffled fabrics, fringes and varied textures covering a surprisingly agile framework of aluminum rods, hand-carved Styrofoam, pyrofoam and mini-Nerf balls for eyes – the result of months of designs, mock-ups, trial designs and experiments.

The play itself has been in Theater Lab’s development process since before the pandemic.

Stabile, who leans toward productions combining theatricality, fantasy and wit, was intrigued upon his first exposure. “I always like plays with shows with seemingly impossible stage directions,” he said with a laugh. “I encourage playwrights to write that stuff and I love it because it leaves it up to the creativity of your team to find out what is the writer intending here.”

Initial discussions encompassed shadow puppetry and lighting effects. Then COVID shut down most live theater operations. But while the company continued to operate on other fronts, the pause gave artists time to rethink and dream big. Literally.

The company’s technical wizard John Shamberger worked up illustrations of Jess. When Theatre Lab mounted a Zoomed reading Oct. 4, he provided drawings of the heroine. Teagle then had a workshop Oct. 16 by the Little Lifeboats company in Minnesota.

Hammond, a nationally-known puppet master, was called in to begin conceptual discussions in November. Stabile said their sensibilities overlap. “You have to have a big imagination, so I love imagination. It’s been a blast. It’s a certain kind of person who goes into puppet-making and (the same) kind of person who goes into theater.” Stabile broke into the song from The Muppet Movie, “The lovers, the dreamers and me.”

Specific concepts were solidified in January and designs on paper appeared in February. Construction started in late March and has been underway ever since.

Hammond’s eyes lit up as he escorted a visitor around the workshop last week, showing off a failed experiment in material for the eyes and offering up a piece of materials sewn together as an example of Jess’ exterior. He pulled on a wire to show how Jess’ ears wiggle a bit. He encouraged photos, paternally posing alongside Jess’ head. He balked at allowing photos of the full body, wanting the scope of Jess’ appearance on stage to be a surprise.

He showed off a maquette of what a real mastodon looked like, although he said sheepishly that the reality of the monster is that it was a bit gaunt and Jess’ silhouette is decidedly ample. “We gave her a bit of baby fat,” he said.

Hammond, his staff and a group of “sweat equity” volunteers were still stitching early this week inside the Broward Center in a race to deliver Jess Tuesday. Puppeteers will begin to experiment with making Jess move and breathe almost immediately. Rehearsals for the play start August 10.

The Impracticality of Modern-Day Mastodons, runs Sept. 4-19 at Theatre Lab at the Florida Atlantic University’s, University Theatre. Performances will be Saturdays at 2 p.m. and 7 p.m., Sundays at 3 p.m. Tickets are not on sale yet. For more information, go to https://fauevents.universitytickets.com