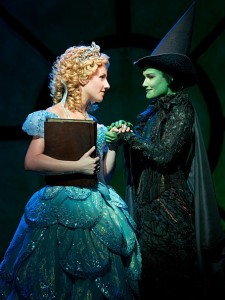 Thirty minutes before curtain at the Broward Center Wednesday, Miranda Palumbo ecstatically grinned as a clerk at the Oz Dust Boutique stuffed a grey hooded sweater jacket into a Wicked shopping bag along with some other memorabilia while her mother paid $94.

“I’ve been waiting eight years for this,” the 17-year-old exclaimed to the clerk.

He’d heard this before. “So you’ve seen the show?”

“Seven times. This is seven,” she said correcting herself.

Miranda has seen Wicked more often than most people have seen Hamlet.  She is the classic demographic as marketers like to say: a youngster with a lifelong love of theater whose personality plugs in to the musical’s theme of empowerment and self-worth among those who feel outcast from mainstream society – in other words, a teenage girl.

“It’s magic,” she explained on opening night. “It draws you in.”

As she spoke, the souvenir stand kept selling $20 programs, $39 tee shirts, $75 glitter globes and $25 light pens that project the Wicked logo on the wall.

“Every time go, I see something different,’ said the Coral Springs Charter School student who studies dance. “Last time, I noticed that in (the number) ‘One Short Day,’ there’s a dancer who dances the whole number in green point shoes.”

When asked why the show spoke to her so profoundly. Miranda responded, “When I first saw Wicked I was immediately taken by the misunderstood green girl who had a passion to change the world which paralleled so much to my life. I think that’s why it resonates with so many people. There is a little Elphaba in all of us.

“I hope it gives viewers exactly what it gave me: hope. It doesn’t matter if you’re tall, short, black, white, or even green. Everyone has a legitimate dream and Wicked gave me the courage to follow my own.”

This entry was posted in Features and tagged Wicked. Bookmark the permalink.