With Tensions High, ‘Disgraced’ Could Not Be More Timely 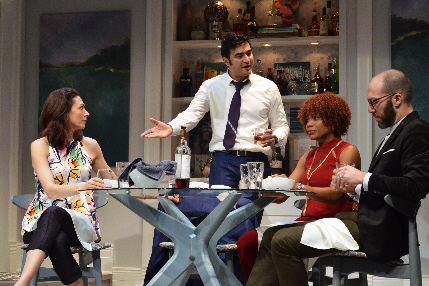 Disgraced, a drama dissecting ethnic relations in post 9/11 America, already has become one of the most produced plays in regional theaters over the past three years – more than 20 productions just last season.

But the Maltz Jupiter Theatre’s production opening this week obviously could not be more timely, although it was announced a year ago and penciled it before that.

Much of the 2013 Pulitzer winner puts four liberal yuppies in the crucible of a dinner party: Amir Kapoor, a successful Muslim-American lawyer; Emily, his WASP wife whose artistic career is rooted in her interest in Islamic culture, Amir’s African-American colleague, and her husband, a Jewish museum curator interested in Emily’s Arab-influenced art.

During an evening of gourmet salad and sophisticated banter, the initially invisible fault lines between cultures crack wide open, leaving devastation in every direction. It is a scalding rebuke to anyone who thinks that any section of society has come to an intellectual or emotional homeostasis about social, cultural and geopolitical divisions.

In the wake of Donald Trump’s recent pronouncements, the resonances are deafening, even though all of the primary characters are American-born in the maiden play script from novelist and screenwriter Ayad Ahktar.

Fajer Kaisi, who plays Amir, said the subject matter means there is no escape in the theater from the events in the outside world in recent weeks. “We’re steeped in this all day and we are living out what these communities (in the play) are going through…. It’s a bear of a play. I’m almost overwhelmed.”

Director J. Barry Lewis, who helmed Doubt for the Maltz and is a resident director at Palm Beach Dramaworks, said that the play should resonate with more than the current situations, let alone for Muslim-Americans. “Theater often has a kind of serendipity; that’s not unusual,” he said.

Pointedly, Ahktar undercuts racial and ethnic stereotyping by portraying complex characters, fighting the tendency of people to “label units or cultures, rather than seeing people as individuals,” Lewis said.

But the play also delves deeply into issues of identity and assimilation. It questions whether people should deny their heritage when they assimilate in pursuit of fiscal success and social acceptance. While current events “create a context,” Lewis said, such issues echo for South Florida where many people are the children, grandchildren or great-grandchildren of immigrants.

“Amir is defining himself the way other people seeing him,” Kaisi said passionately.

The human universality of crossing lines of ethnic identity are also touched on because of the characters’ tragic flaws of hubris and pride in their accomplishments may be more fragile than any of them realize when prejudice erupts.

Even more universal are the questions about whether the American Dream is truly achievable for everyone and whether it is worth the sacrifices. Lewis said, “Is the American Dream elusive or obtainable? If you work hard, you are supposed to be able to (achieve it.)” But he and Kaisi say Disgraced doesn’t see those as rhetorical questions – ideas they said were raised by Arthur Miller in Death of a Salesman and even more so in his All My Sons.

Obviously, the play isn’t theoretical to Kaisi, a genial, but fervent young man born in Iraq, who grew up in Montreal and attended the University of Texas at Austin. He speaks at length about ideas that the play can generate in inevitable discussions among patrons on the ride home.

For instance, Kaisi is frustrated that Americans honor the cultures of other immigrants such as Jews and the Irish. But Americans tend to ignore, downplay or are ignorant of the contributions of Arab and Islamic cultures to the world’s knowledge, let alone the western hemisphere. He held up his cellphone. “You see this? This is based on algorithms, the work of “Al-Khwarizmi, a 9th century Persian mathematician”

In the interview, he and Lewis roamed over varied topics circling clashing cultures, a back and forth punctured with dry humor and some wryly raised eyebrows.

Kaisi played Amir a year ago in Pittsburgh, he said, although he has auditioned for it “a dozen times. I’m in a pool that’s not that large. There are maybe 5 or 10 actors. Maybe more.”

Lewis added, “And they are in demand for television.”

That dearth had led to several companies to cast actors other than those with Middle Eastern roots. GableStage’s 2015 production cast two Latinos as Amir and his nephew. Asked if that upset him, Kaisi shrugged his shoulders.

Disgraced has been embraced by artistic directors in regional theaters across the country, in part because of its “produceability” (one set and five actors), Lewis said, But undeniably, its premises and themes are “ripped from the headlines.”

That latter element has been true since Ahktar began writing the piece almost a decade ago. But never more so than now.