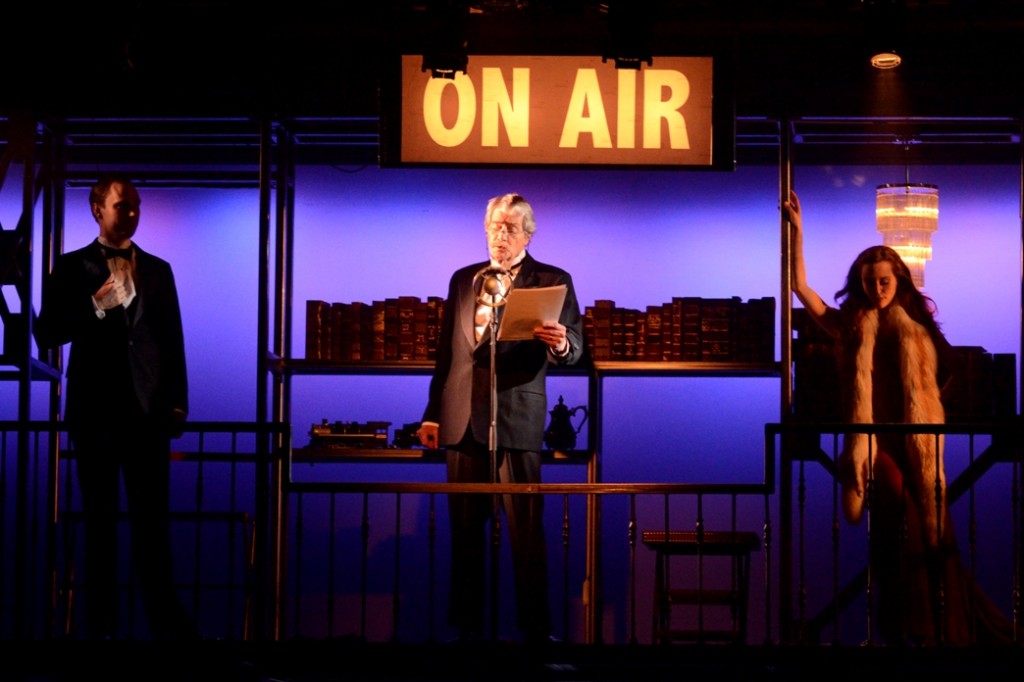 South Florida impresario and veteran Broadway producer Zev Buffman foresees a future for stage theater — in radio. Not just for any theater, but orphans like the Parker Playhouse that are too big for local theater troupes and too small for Broadway tours. And he wants to do it in part by reviving the genre of mystery/thriller plays.

Local audiences will see his first foray this month with his production of Agatha Christie’s The BBC Murders, four radio plays lost for a half-century, uncovered by Buffman’s detective work and adapted by grafting full-fledged theater techniques onto a vintage radio drama foundation.

The offering beginning a three-week run Wednesday at the Parker – a house Buffman virtually built — is included as part of Broadway Across America’s Fort Lauderdale subscription series – the successor to the national tour company he created here decades ago.

The episodes’ origins as radio dramas before and after World War II in London dictate that the first piece opens in a vintage BBC radio studio with actors reading from scripts into stand-up microphones. Sound effects are provided in ingenious ways by a “Foley artist” and his assistant.

But as the evening ensues, ever-increasing theatricality seeps in: actors become untethered from their microphones and relate to each other, costumes and lights are added, musical underscoring increases, projected scenery appears, and the sound become increasingly more sophisticated (moving around the auditorium like Quadropehenia) until the production emerges as a complete stage undertaking. 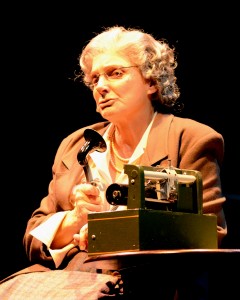 Among the four pieces is Three Blind Mice, the forerunner to Christie’s The Mousetrap, which holds the record for the longest continuous production still playing to audiences. Yellow Iris, featuring Christie’s fastidious detective Hercule Poirot, is augmented with original music by Broadway composer and mystery writer Rupert  Holmes (The Mystery of Edwin Drood)  because the last piece occurs in a jazz cabaret.

Butter In A Lordly Dish: First performed by the BBC on January 13, 1948 in a series entitled Mystery Playhouse Presents The Detection Club. Christie’s drama follows a lawyer’s relationship with a mysterious woman who he meets while convicting a man for a series of vicious murders.

Three Blind Mice: A snowstorm and a psychotic killer on the loose have a cast of characters locked in a guest house full of accusations and anxiety. It was first performed on May 30, 1947 as part of an evening program in honor of Queen Mary’s 80th birthday. The BBC approached the Queen some months prior and she requested a new mystery by Agatha Christie, a writer the Queen deeply admired.

Personal Call: This mystery mixes “a strong drink of delicious deception into a haunting story of lies and betrayal. Superstition takes you on a murderous adventure through London train stations and provides a ghostly encounter.” This never published thriller was Christie’s final play for the BBC and reuses the character of Inspector Narracott from the 1931 novel The Sittaford Mystery.

Yellow Iris: The past comes to haunt dinner guests during a party held in a cabaret on the one-year anniversary of a murder.  Fear is the centerpiece of a table decorated with a yellow iris as Poirot tries to solve the first murder to prevent a fresh one. First presented on the BBC National Program in 1937.

The idea of radio as a setting for theater is not new. Musicals ranging from The 1940s Radio Hour to Million Dollar Quartet are set in recording studios. Actor Gordon McConnell’s local company AirPlayz performed radio plays for several years including The Maltese Falcon and The War of the Worlds. But this production is complex enough to require 577 sound and light cues, Buffman bragged.

Late last week, the 82-year-old elfin impresario was sitting in Parker’s rehearsal hall surrounded by placards listing each season of shows and stars he brought here. The memories flooded back. “Most of my productive life was here. Thirty years.” He’s been inside before this, but not often. He’s only been living in Florida since October 2011, running Ruth Eckerd Hall and the Capitol Theatre in Clearwater. 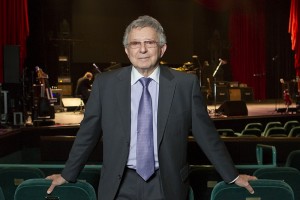 Zev Buffman / Photo by Tracy May

Buffman is one of a handful of surviving South Florida theater legends. His resume as an old-style hands-on producer lists more than 100 national tours and 40 Broadway shows including Joseph and the Amazing Technicolor Dreamcoat and Elizabeth Taylor’s fabled turns in The Little Foxes and Private Lives. He ran the Coconut Grove Playhouse, bringing in New York and Hollywood actors starring in roles they’d never get the chance to play elsewhere. He virtually created the modern day touring Broadway series, which he sold in 1988 to Pace Theatrical Group that has morphed over the years into Live Nation’s Broadway Across America. With Louis Parker, he pushed for the creation of Parker Playhouse in 1967 and was its primary producer for 30 years. He also cofounded the Miami Heat in the 1980s.

The path he and The BBC Murders took back to the Parker stretches back more than a decade when he lived in Palm Desert, California.

“I was hanging with Angie” — Angie being Angela Lansbury –‘We had done three shows together and we talked about the disappearance of mystery thrillers from the New York, Toronto and London stage.”  Indeed, at one time, works like Dial M For Murder, Sleuth and Deathtrap were regular Broadway staples. Lansbury, the star of Murder, She Wrote agreed with him that all the playwrights writing mysteries had defected to the more remunerative and reliable film and television industries.

Buffman moved in 2003 to Owensboro, a small college town in western Kentucky where an ailing sister lived. He agreed to manage a local theater complex but it needed “product.” He gathered Lansbury and an equally well-known collection of friends to help create an International Mystery Writers Festival that would choose and produce mount full productions or readings of complete plays, one-acts and radio scripts. The first edition in 2007 sorted through 1,000 entries and mounted 12 productions.

The Christie project came about because Buffman had read in her biographies about titles only produced on radio once and whose current whereabouts were a mystery, even to the Christie Estate. The conventional wisdom was that some were lost during the bombing of London by the Germans and the rest disappeared in later post-war cleanup projects. But during a persistent treasure hunt, Buffman finally located them in the archives of a London library.

The pages were tattered and weather-beaten, but they still contained the actor’s notes in the margins and marks to cut sections to fit the time slot. The library allowed Buffman to copy these scripts, which he then reproduced on paper approximating the kind used by the BBC. The works adapted and directed by Walcutt and Ossman became the centerpiece of his 2009 edition of Buffman’s continuing festival.

It has had only one other outing: last November in Clearwater where Buffman says the audience “fell in love with it.”

Buffman is negotiating with theaters in Seattle, Los Angeles and San Francisco to present the Clearwater/Fort Lauderdale production. But The BBC Murders and what Buffman dubs “radio theater” is really a trial balloon for a much larger project.

He sees a severe need for tightly-produced original programming like this to fill mid-sized theaters like the Parker, the Eckerd and the Capitol in Clearwater, the Fillmore (nee Jackie Gleason) and the Gusman in Miami, the Royal Poinciana in Palm Beach, the Coconut Grove Playhouse before it closed and the Bob Carr Performing Arts Center in Orlando – theaters with about 1,000 seats. Financially, that’s too small to support the cost of mega-tours like Wicked and too big for a regional theater like GableStage to fill over a three- to five-week run. The grand plan is for Buffman to produce those works and tour them across the country.

The radio theater concept might be the answer, said the genial Gary Sandy, who has been in several of Buffman productions and admires his integrity. But it has to be satisfying theater, not just a stunt. “It’s a work in progress. If Zev and David and Phil can figure out a way to put radio on the stage and make it more than just a gimmick or a novelty. In the first 20 minutes, the audience is fascinated by how it’s done, but after 20 minutes, they’ve seen it, and you have to find (material) that will hold them.”

Sandy has become a Buffman fan since hooking up with the original production. “He has integrity. Three years ago he said, I’m going to do this someday and I’ll  want to you to do it.” Sure enough, the call came earlier this year. “By God, he did.”

The idea that an 82-year-old is running an entertainment complex on Florida’s west coast, helming what he hopes will be a national tour and changing the fate of empty theatres across the country doesn’t strike him as strange.

He laughs off the mention of about retirement. With that slight Israeli accent, Buffman asks, “What would I do?”