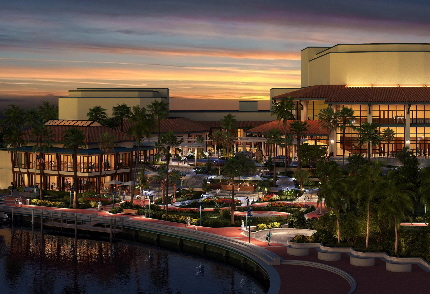 For arts fans looking for a bit of good news, the Kravis Center and the Broward Center are on track to be the first of the region’s large presenting houses to host a live event with an in-person audience inside one of its venues.

They aren’t theater per se, but they mark a milestone in live presentations.

The Symphony of the Americas has slated its Merci Maestro program for Nov. 13 inside the smaller Amaturo Theater in Fort Lauderdale.

And for slightly different tastes, the Kravis in West Palm Beach will usher in Halloween on Oct. 31 with two shows of Kiss Alive, a tribute band concert.

While the Broward Center and Kravis Center, like the Arsht Center in Miami, have been busy supplying a stream of online classes and arts programs since the mid-March shutdown, this marks the first time that the showcase houses have had a live audience attending a live event indoors.

The 7:30 p.m. Symphony program is designed as a farewell concert and tribute to retiring James Brooks-Bruzzese, who is the co-founder and artistic director of the symphony. A pre-concert celebration will be held followed by music selected by Brooks-Bruzzese.

The Kiss tribute show, featuring musicians appropriately made up to resemble the classic rock group’s appearance, will have a 6:30 and 9:30 p.m. romp.

The key is social distancing required by each county’s guidelines. The Broward event is planning to serve 174 audience members spread out among the auditorium’s 582 seats. While tickets are available, many have been reserved for sponsors and donors who had committed to the event originally slated for April 13.

The reopening plan has been approved by Broward County officials as meeting their guidelines. The facility itself has developed a lengthy detailed planning document in collaboration with Cleveland Clinic and following the guidance of local health authorities and the Centers for Disease Control.

Among several precautions all Broward guests must wear face coverings. If a guest is not feeling well, has a temperature greater than 100.4 degrees, or is exhibiting any symptoms associated with COVID-19, they are encouraged to stay home or may be asked to leave the facility. Tickets for this event will only be available in allotments or 2 or 4 patrons seated together and will be six feet from any other party. There will be no single tickets available.

The Kravis concerts – as with its other live events later in the year – only provide seating cabaret style with tickets only being sold as a complete table for four at $120.

The symphony event recognizes the work of Brooks-Bruzzese who helped create the company in 1988 and, according to the center’s website, “was a key leader responsible for transforming Fort Lauderdale into a music mecca. His leadership and artistic talents enabled the Symphony to soar to new heights.” He opened the Amaturo Theater with the first concert in September 1991.

Despite the events’ scheduling, the Broward Center is confining most of its other efforts to an extensive list of online programming. Kelley Shanley, the center’s CEO and president, has said the same thing as his colleagues at the Kravis and the Arsht: social distancing regulations cut down the number of potential customers who can attend an event to the point that it would be fiscally problematic.

That combined with a lack of agreement with Equity, the actors’ union, has made scheduling major events like the Broadway tours in the Broward Center’s larger Au-Rene theater nearly impossible.

But some groups are experimenting: Slow Burn Theatre Company, the resident professional troupe at the Broward Center, normally performs in the Amaturo, but its season opener – the Jason Robert Brown song cycle Songs for a New World is currently slated to be performed in the center’s open air courtyard Dec. 16 – Equity willing.

Before that, the venue has slated a musical version of A Christmas Carol for a live audience in the Amaturo on Dec. 11-12 in a co-production with Massachusetts troupe, The Performance Project, but also is offering it online Dec. 16-31.

The Arsht has announced a series of free live musical performances and events beginning Nov. 20 and through December – but all occurring on its outdoor plaza on the east side of the Ziff Opera House. Otherwise, it has put together an extensive series of classes and concerts available online through the rest of the year, including a Hip Hop Nutcracker and a performance by the legendary bluesman Taj Mahal.

The Kravis also has listed live in-person events for December in the smaller Rinker Playhouse, which normally would seat 285 people but will handle 92 with social distancing:  Revered local blues and gospel chanteuse Avery Sommers is penciled in for a “best of” concert Dec. 19, and the satirical spoofers Forbidden Broadway will return with its Next Generation show Dec. 27-31. In both cases, seating will be cabaret style with tickets only being sold as a table for four at $170 to $250.