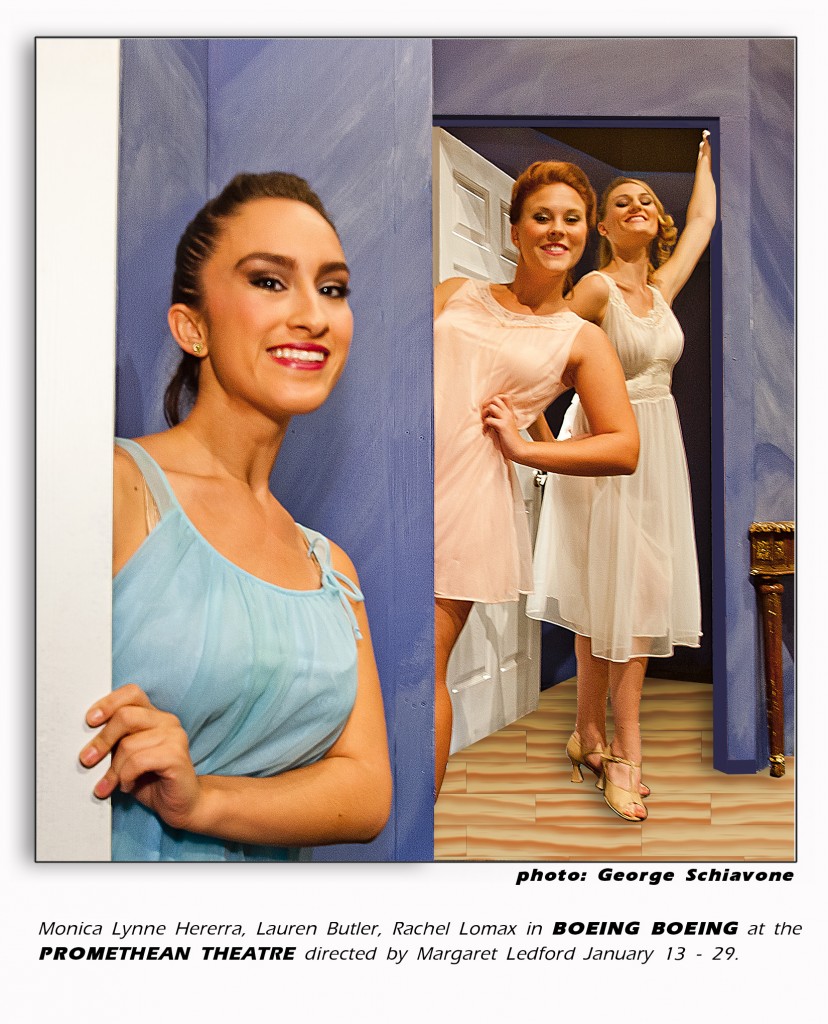 Book-learning and collegiate productions provide theater students the basics of the craft they hope to follow, but The Promethean Theatre is providing Nova Southeastern University students with real world experience that is far more rigorous and revealing than class work.

There’s a scene in Promethean’s current production of the 1962 sex farce Boeing Boeing in which actress Lauren Butler aggressively seduces actor Mark Duncan, and another where Duncan lustfully ogles actress Monica Lynne Herrera. Insiders might smile at the knowledge that Butler was a student of Duncan’s until a year ago and Herrera still is.

Their history illustrates the evolving symbiotic relationship between Promethean, a professional theater company, and Nova theater department over the past seven years. The theater benefits from access to Nova’s resources and the students benefit from on-the-job training alongside Promethean’s professionals.

The fiscally precarious Promethean performs and rehearses for free on campus, usually at the Don Taft University Center Black Box Theatre in Davie. Promethean provides opportunities for students to work as ensemble actors and backstage interns. It’s not busy work; they are integral to Promethean’s ability to mount shows inexpensively.

The cross-pollination is evident night and day. By day, Associate Professor Duncan is the chair of the department and assistant director of the Division of Performing and Visual Arts at the Farquhar College of Arts and Sciences. By night, he is acting the role of Boeing Boeing’s nebbishy Midwesterner wowed by his college friend’s amorous adventures.

At night, Duncan, Butler and Herrera are guided by Promethean’s house director, the Carbonell-nominated Margaret M. Ledford. By day, Ledford is the Theater Technical Manager at Nova overseeing students in the work study and tech theatre classes in the scene, prop and costume shops — students who have included Butler and Herrera.

“One of the benefits in synergy with Nova is our proximity to… the young emerging artists and that opens our eyes to more possibilities,” Ledford said. “It also makes us look at our craft harder, and put into words what excited and still excites us and share that with them. (It’s) a fluid exchange of electricity, energy and excitement that can be both initiation and rejuvenation.”

In exchange, students are exposed to the rigor of professional theater, said Deborah Sherman, co-founder of Promethean. “We don’t treat them like students; we hired them to do a job. We’re not giving a grade; we have an expectation of professionalism. There’s things you can’t get away with in the professional world that you can in class.”

Nova educators believe the partnership dovetails with its goal of “equipping students with skills needed to successfully perform, direct, design, research, produce and meet the challenges of arts in the 21st century,” said Duncan.  Promethean staffers also teach master classes and its guest artists speak and work with students.

Butler and Herrera both have prior experience as Promethean interns working all aspects of the production. Herrera is a Miami native slated to graduate this spring after studying theater, dance and communications. Butler graduated from Nova in 2010 with degrees in theater and in psychology; she’s now studying at the University of Central Florida and planning to use Boeing Boeing as the basis of a master’s thesis.

Butler’s training in the backstage arts was handy when she spent part of the days before Boeing Boeing’s opening night sewing slipcovers for stage furniture.

“It gives you an appreciation of what everyone does,” the actress said of interning in the trenches. “You appreciate who builds your set.”

Herrera is the first Nova student to have a leading role in one of the productions. “I’ve learned more in one month than….” She looked guiltily at Duncan, “… well, not more than I’ve learned in school, but I’ve learned so much. It’s because it’s so concentrated. We rehearse five or six weeks for a university piece. This has been about three weeks.”

Butler has a bit more experience but she agrees the rehearsal period was intense requiring her to memorize lines quickly. “I’ve worked harder and faster than ever before.”

But having a past with Promethean also provided a feeling of a safe haven for Herrera . “At first, I felt nervous to be working with pros. But Mark and Margaret, who’s been a mentor to me and has directed me in school productions, made me feel very comfortable, very safe working on our scenes and in this professional environment for the first time. It’s been really rewarding.  It’s clear now what to expect and what’s expected of me…  If this was a professional show and I didn’t know anyone, I’d be terrified.”

Not that she doesn’t feel considerable anxiety. “You have a lot more riding on this when it’s your name on the bottom of a (publicity) postcard,” Herrera said.

Having a history with Promethean  helps, Herrera agreed. “It never felt strange. I loved watching Mark work during rehearsal. I learned a lot just by watching. Our scenes together were a lot of fun. It was play time.”

Butler, too, savored the connections. She recalled that she saw Boeing Boeing when it was revived in London – as a freshman on a school field trip overseen by Duncan. “I remember saying, I really have to be in that show someday.”

Duncan is a Promethean vet as well: He acted in its summer musical Cannibal!, its modern take on Cyrano de Bergerac and in the acclaimed Still the River Runs.

Having a resident professional company on campus also adds a luster to Nova’s quest for its theater program to gain wider recognition. The university has had an arts program nine years, but it doesn’t have the high profile of the University of Miami or the New World School of the Arts.

But that has been changing. “The university is really beginning to get known for what we’re doing,” Duncan said. In part, having a professional theater on campus gives the school a credibility, and brings outsiders onto campus to see that Nova has facilities and programs that many people didn’t suspect. “We’re becoming a central area for arts. Broward didn’t have this kind of thing.”

Duncan remembers arriving to found the theater curriculum in 2004. “We only had the Miniaci (theater) to perform in and that was being rented out. Now there are five” performing arts spaces.

Butler said, “When I came here four years ago, we held rehearsals outside. We had to stop for passing airplanes.”

Nova’s full-fledged Division of Performing and Visual Arts was started in 2008, adding majors in dance, music, visual art and arts administration to the theater program, and recently added a major in musical theater. Its graduates are ambassadors for spreading the word of the quality of education, Duncan said.

“We’re getting there; it takes time,”  Duncan said.

Whatever evolves, Promethean staffers savor the interaction. Ledford said, “There can be nothing more satisfying than seeing the light bulb go off behind someone’s eyes”