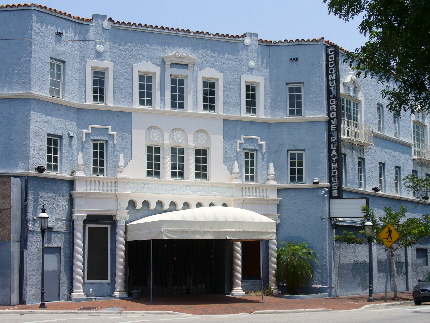 The campaign to reopen the Coconut Grove Playhouse with a smaller auditorium built behind a restored façade suffered another setback Wednesday in the 14-year saga, according to court records.

The 11th Circuit Court of Appeals denied a motion by Miami-Dade County requesting that the judges quash the City of Miami mayor’s rejection of the county’s proposal to rehabilitate the historic site, according to the ruling obtained late Wednesday.

The three-judge panel did not rule on the merits of the objections raised by the county, but decided unanimously that they did not have jurisdiction in the case, the decision read.

The 15-page decision’s effect was unclear on the project that exists as a joint effort of the county, Florida International University’s performance arts programs and GableStage, the Coral Gables regional theater that would be based there and manage it for other clients.

Either side could conceivably appeal to the state Supreme Court, but the county has been anxious to advance the project as soon as possible. The county and FIU have a lease with the state Department of Environmental Protection, which actually owns the property.

As of Wednesday night, the county plans to move forward per previously established marching orders, said Michael Spring, director of the county Department of Cultural Affairs. Previous discussions about possible outcomes among administrators and county attorneys have held “we have very good alternatives to pursue this” no matter the ruling, Spring said Wednesday.

The question mark is that Mayor Carlos Gimenez, a prime mover with Spring on the project, is term-limited out this fall and no one knows whom his successor will be, let alone that person’s preferences. Further, about half of the county commission seats are up in the November election.

The nationally-known Playhouse has been closed since 2006 – its 50th anniversary season — when an estimated $4 million in debts caused its non-profit board to shutter operations. But arts officials, Gimenez and Spring, had been striving for years before that to preserve some kind of theater operation on the site.

Judges Angelica D. Zayas, Daryl Trawick and Lisa Walsh heard arguments from attorneys from the county and the city on June 16.

The jurisdictional argument stemmed from the county’s contention that previous decisions in the project’s progress by a city preservation board and the city commission as well as  the mayor’s veto of the city commission’s previous blessing of the project were “quasi-judicial” actions that, indeed, are legally subject to review by upper courts.

The county contended that they mayor’s veto did not qualify as “quasi-judicial” and the appellate court agreed, thereby taking the case out of their purview.

Miami-based Arquitectonica has completed the bid package of architectural and engineering drawings, Spring said last month. Once the project has the go ahead, the drawings/specifications package will be submitted to the City of Miami Building Department for review for a construction permit. “We may simultaneously issue the drawings and specifications set for construction bids,” Spring wrote last month.

The tumultuous journey, often marked by hearings and meetings populated with passionate speakers, came to court after a drama more complicated than a Tom Stoppard play.